For a long time I have wanted to enhance my games with some UI particles, but I couldn’t find a good option. The only available options were render targets, a clunky and expensive choice, or some plugin from the Marketplace without Niagara support. While waiting for Epic to integrate UI particles to their engine, I thought that I could give it a shot myself. I ended up with something that works pretty well, so I want to share it with you guys. Feel free to use it however you want, and leave any comments or feedback.

Niagara UI Plugin adds Niagara Particle System Widget that allows you to render Niagara particle systems directly into the UI. The plugin supports sprite and ribbon CPU particles. It was tested on Windows and Android, but it should work fine on other platforms too. This screenshot shows performance metrics captured in a scene with 1,000 particles running on AMD Ryzen 9 5900X. It takes approximately 0.05ms to generate sprite data and 0.1ms to generate ribbon data. These numbers DO NOT include any actual Niagara simulation or rendering time. You can use “stat NiagaraUI” in console to check on the performance.

You have 4 options how to install the plugin:

I’ve also made some tutorials to help you guys get started or inspired. They range from simple beginner effects to a bit more advanced.

Before you watch them, I would like to apologize for my English. I know that I have a lot to work on

Amazing! I can see this being very useful for 2D and menu-heavy games! Thank you for contributing to the community!

If you’re like me, you’re already playing around with the new UE5 early access, which is by the way amazing! I’m still sad though, that there are no official UI particles. In the meantime I’ve updated my plugin to support UE5 Early access.

While everything should work smoothly, there’s a possibility that I overlooked something when upgrading to UE5. Feel free to let me know if you’ll find any issues, or if you’ll need any help in general. I hope this plugin will help you in creating amazing experiences!

This is just amazing! <3

This is awesome but it would be perfect if you didn’t have to do the whole material domain jank. Oh well, gotta take what we can get.

. Unfortunately, the way I’m rendering particles on screen is through Unreal’s SMeshWidget, which requires the material domain to be UI. I’m not even sure that there is a way to make them render with normal materials, because you’re missing a lot of world information (for example lighting). Also, you probably want separate material for UI particles anyway, since the UI particles won’t have any post processing applied to them. Which means effects like bloom just won’t work, and you have to fake them in material (you can find an example in the demo project).

Oh no I understand why it has to be done, I’m just thinking about whether there’s a way to automate the process.

I think that some automation should be possible. It probably won’t give a perfect results every single time, but I may look into it sometime in the future. I have a lot of things going on right now, but maybe in a few weeks I’ll have time to implement some kind of automated material conversion, and I also plan to add support for tessellated ribbons.

This one is wicked!

One question thou: the systems won’t run / update if the game is paused. Some parts of UI needs the game to be paused, any idea how to set the widget to update even when paused?

Edit:
added constructor to UNiagaraUIComponent and set PrimaryComponentTick.bTickEvenWhenPaused = true; didn’t do the job

Thanks for the suggestion. I’ve added option to Tick when Paused to the plugin. I don’t have time right now to make a release but I’ve pushed the update to the github so you can grab it from there. Let me know if you’ll have any troubles setting it up or if you need packaged plugin with compiled binaries.

Basically the trick was that other than setting the bTickEvenWhenPaused you also have to SetForceSolo to true, so it will get simulated separately even when the game is paused.

You can find the option on each Niagara System Widget: 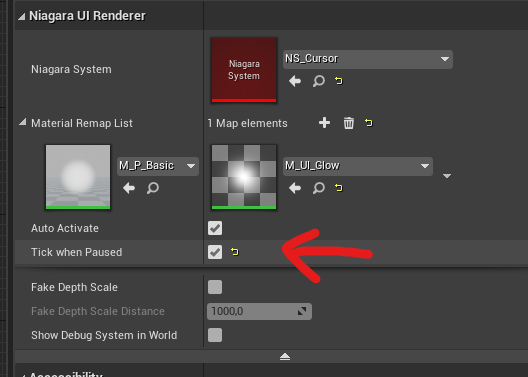 Is the UE5 version also distributed under MIT license?

Any chance you could include the license in the zip? Better yet, would be if the UE5 version was also on GitHub! Or is the UE5 version identical source, but just re-compiled in UE5?

Really looking forward to trying to out!

Edit: I just took a quick look and it does in fact appear that the UE5 version source is identical and is simply a minor edit to the plug-in confirm along with binaries built against the new engine. So, yah, in a perfect world there would be a branch in git which makes the changes to NiagaraUIRenderer/NiagaraUIRenderer.uplugin at main · SourySK/NiagaraUIRenderer · GitHub for UE5, just so that licensing is crystal clear.

Yes, the UE5 version is also distributed under the MIT license.

You’re right, the UE5EA version in basically the same as the GitHub version just with some really minor tweaks, so it shouldn’t be problem for anybody to get the GitHub plugin compiled under UE5EA. I didn’t put the UE5EA version on the GitHub because the main development version is still for UE4, since UE5 is in early access. I just wanted to put out precompiled version for UE5 for anybody that wants to experiment and play around with it, but doesn’t necessarily know how to compile his own version of the plugin. But don’t worry, you can still use it however you like no matter if it’s on a personal project or a big production. It was made for the community

I plan to add UE5 version to the GitHub once the UE5 comes out of the early access. If it’ll help you I can include the license in the .zip files in the future releases.

Hi. When i package the sample project to Android i get below error:

Anyone knows how to solve this?

Hi!
At least to me it looks like you have “Warnings as errors” enabled. If that’s the case, try disabling it. I’ve tried to package the GitHub version of the project for Android, and it works fine for me. If that doesn’t help, could you give me more information about what is your configuration? Did you clone the repository of the GitHub or are you trying the zipped Demo project with included binaries. Are you packaging the project from the editor? What version of the engine are you running? What version of the Android SDK are you running?

Hi! I’ve fixed the warning. You can get the latest from GitHub and let me know, how it works.

I think the problem was on my end. Anyways i packaged the app and put it in play store for internal testing and the Plugin works fine there.

By the way i was using:

Android SDK: 29
UE4 4.26.2
Zipped project demo with binaries
Packaged the game from editor works fine (launching the game via usb to phone caused errors but that may be an issue on my end)

Great Plugin. Keep it up.

Thanks for letting me know @jyashi. I’ve tracked down the issue. It was caused by Unreal treating warning as errors when launching the game directly to the phone, so it wasn’t caused by your setup. I’ve fixed the warning yesterday and pushed the fix to GitHub, so you can grab it from there and the Launch should work just fine.

Thank you for keeping the plugin updated.

Thank you for the support.

PS: Is the Plugin with included binaries link updated with the new fix that you added or is it only available if i pull it from Github?

You should be able to create a new widget without relying on the sample project. When you’re creating the new widget, are you following the guide that’s in the original forum post? Most likely reason why your widget doesn’t work is that you’re not remapping materials to the UI ones. There’s “Material Remap List” on each widget, which you need to set up in order for it to work. Also always make sure your particle systems Sim Target is CPU.

I’m currently working on a documentation for the plugin. There’s a more detail step by step guide on how to set up the widget properly. The documentation isn’t fully finished yet, but it may help you. I would recommend to take a look especially at the steps 2. and 4. in " Setting up Simple UI Particle System" which show how to remap materials.

Let me know if you need any more help.