Oh wow it’s been a while since I’ve been here! Sort of a new guy here. Long time experience with Unreal 3, kinda skipped 4, and sorta back now with 5

Since I skipped 4 pretty much, I’m fairly new to blueprints. I’m still fairly familiar with the toolsets in UE3, so knowledge does transfer. I’ve been smashing my head trying to debug foot IK placement for a not so “Character” model that I have laying around. 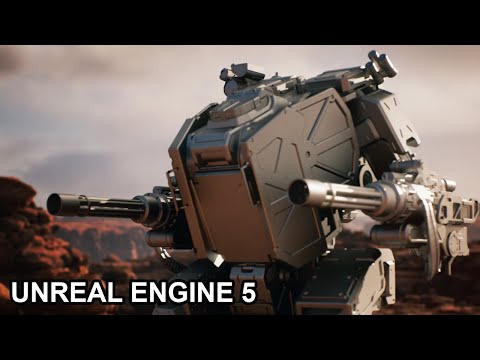 I’ve rigged this mech in Unreal 3 for Renegade X Firestorm with a very similar IK foot placement solution, and figured the same thing should work. I’ve watched countless tutorial videos and read through too much documentation. At this point I am in need of some guidance from the community.

The problem I’m having is specifically with the foot positioning being offset on mostly slopes. There are some issues with flat surfaces with steps as well, but those tend to appear less problematic as its usually just the one foot that sinks below the ground.

This is all of the blueprint scripts related to IK foot placement:

My ultimate goal is to do something similar to the Ancient character with nanite versions of each body part for this mech. However I need to first solve the character locomotion and functions via the low poly model first.

Any and all help would be greatly appreciated!