Since I know many of you use MakeHuman with UE4, I thought I’d share some news that the MakeHuman team is very excited about. Manuel Bastioni, our team leader and original founder of the MakeHuman project has been working on a project in secret.

It’s a Blender plugin called ‘Manuel Bastioni Lab’. As the name suggests, it is Manuel’s personal project that he’s decided to release to the public. While sharing similarities to MakeHuman, it is its own project and contains concepts and prototype features that are not in MakeHuman (yet). For example, it contains a new algorithm to fit clothes dynamically, a different way to sum the morphings, a new algorithm to fit expressions etc.

It’s not a replacement for MakeHuman, but this project could be considered an alternative. In short, if you like both Blender and MakeHuman, you should give it a try. Do note that the licensing terms are different to MakeHuman’s CC0 export license, but they are still very open for use (including in commercial applications).

If anyone is interested, you can grab a copy from: Page under construction

Looks really cool and i love Blender, i will try it out for sure

Whoa this is great news

Thanks for the heads up

For those wondering about the base-meshes and how different it is to MakeHuman… The entire approach is quite different. I’ve confirmed with Manuel that there are multiple base meshes, all totally built from scratch. There are 3 currently, human male, human female and anime female. He’ll be adding an anime male base-mesh as well.

As most of you are probably aware, MH has a single base mesh that is morphed into whatever character of whatever age you want. If I understand correctly, with ManuelLab there are a set of base characters modelled by hand based on the most suitable of the base meshes. From there, you tweak the character with morphs similar to MH to customise the character further.

This look very good!! is there any “expected” features for a future? (or a kind of roadmap).
For example, skin materials etc.

This is great. Can’t wait to check it out!

looks like i’ve got work to do this weekend, add another character option from blender to UE4

looks great at the first read

This look very good!! is there any “expected” features for a future? (or a kind of roadmap).
For example, skin materials etc.

Manuel has been documenting them in the guide section:
http://www.manuelbastioni.com/guide_features_planned_in_next_versions.php

He’s also documented how it differs from MakeHuman which some people might find interesting:
http://www.manuelbastioni.com/guide_main_differences_from_makeHuman.php

If you are looking for skin textures, MH is currently your best bet, it is a more mature application and we’re currently working on 1.1 which has better support for game engines and such. MakeHuman also has the ability to create any sort of realistic human character from a baby to an old lady, from a standard person to a supermodel or body builder all using a single base mesh. It is a very flexible application. On the other hand, ManuelLab has newer features that do not exist in MH, it also has new base meshes, supports anime character creation and can work in Blender directly etc. So you sorta need to balance it out and see which application suits you best.

As a member of the MakeHuman team, I just think it’s great having an alternative to MakeHuman that is both commercially usable and free/open source. Funny that it was created by the same person, but that’s just how he is.

looks like i’ve got work to do this weekend, add another character option from blender to UE4

@Raziel, hey thanks! I didn’t saw the section the first time I visited the website.
I’m looking forward for this, and thanks again to you for the heads up.

main things to watch for

Pretty cool. MH is great and this looks promising as well. Thx for that hint.

nice project, i have never used makehuman, but i will try this ! thanks for the info.

This is tricky to get into UE4, some other tid bits are that you’ll have to retarget to humanoid and select spines and neck manually when targeting. Then you must recursively set skel targeting for the bones, which is common. One downside I saw is that the clavicles look improperly adjusted, by about 15 deg., as well the fingers are not right and so it appears like a flat hand.

Which issues did you get? You could workaround if you delete the real root bone (that is a bone) in edit mode and rename that (orange) armature icon in the outliner to “root”. If you export a default UE4 mannequin to FBX and import that into Blender (and ignore that messed up rotations but just look into the outliner regarding bone-hierarchy) then there is no real root bone as well (like a root bone with a bone icon). If you import the mannequin to Blender then the grey and the orange armature icons are both called root (but no common bone). It seems to be enough to rename the orange one.

That is pretty cool

This is tricky to get into UE4.

It’s not that tricky at all (tinkered just a few hours for fun):

- Deleted root bone. Imported UE4 mannequin to get a clue regarding scale via the UE4 tool from Lui - [ADDON BLENDER] UE Tools - Community Content, Tools and Tutorials - Unreal Engine Forums . Modified size and applied “scale and rotate” in object mode for everything (mesh and armature). Modified rest pose to look similar to UE4 mannequin pose in Blender. Applied armature modifier to the mesh (so it does not change if its skeleton is wiped), changed rest pose in “pose mode” to the armature and added the armature as modifier again to the mesh (so the rest pose finally looks similar to UE4 manneqin ones): 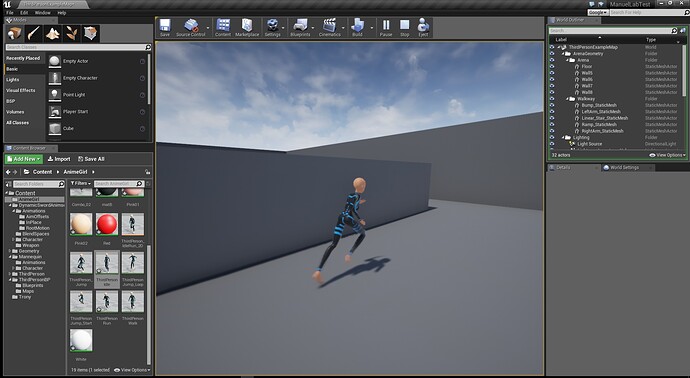 Retargeted “Dynamic sword anim” set from market place (4.11 pre) Dynamic Sword Animset in Animations - UE Marketplace (animset is awesome - but mesh is missing twist bones, which could be fixed in Blender via adding few bones and do some weightpainting): 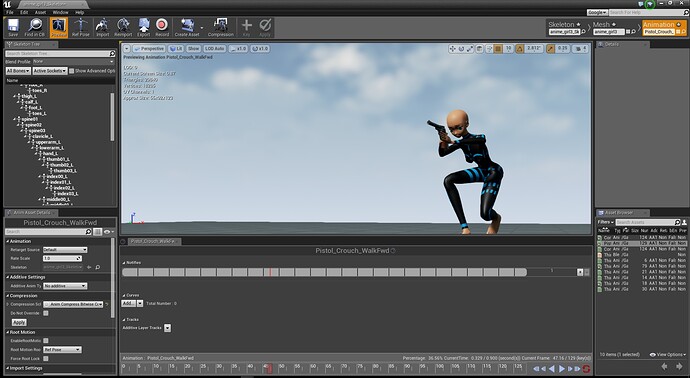 So far I have no plan to release any Anime-UE4 title… but it’s still pretty fun to tinker with the mesh as it’s fun to do the same with the meshes from Makehuman (Manuel Bastioni rocks!).

Hey, thanks for sharing this. When you did the export to DAE, did you use any special settings? Could you post a shot of your export parameters? That would be awesome. Thanks again!

When you did the export to DAE, did you use any special settings?

Just the default export and import settings of Blender 2.76b. Could be DAE or anything else (I remembered DAE was good for MH so I just picked this one). Maybe this step is not necessary at all if you don’t click on the Plugin button anymore. I would just “disconnect” the mesh from its wires to the ManualLab plugin with this export/import step - because the shape of the mesh was already fine and I would not confuse the plugin or armature if I start to remove the root bone and change the rest pose of the armature.