Yes, yes, it’s me again. I’ve learned a bit of patience and know that I have to wait a bit for any mod uploads/updates to show up. Okay, but that’s al been done and now I fear I might have done something silly, but, here, let me show you the screenshot. It only happens when I use my new mod. 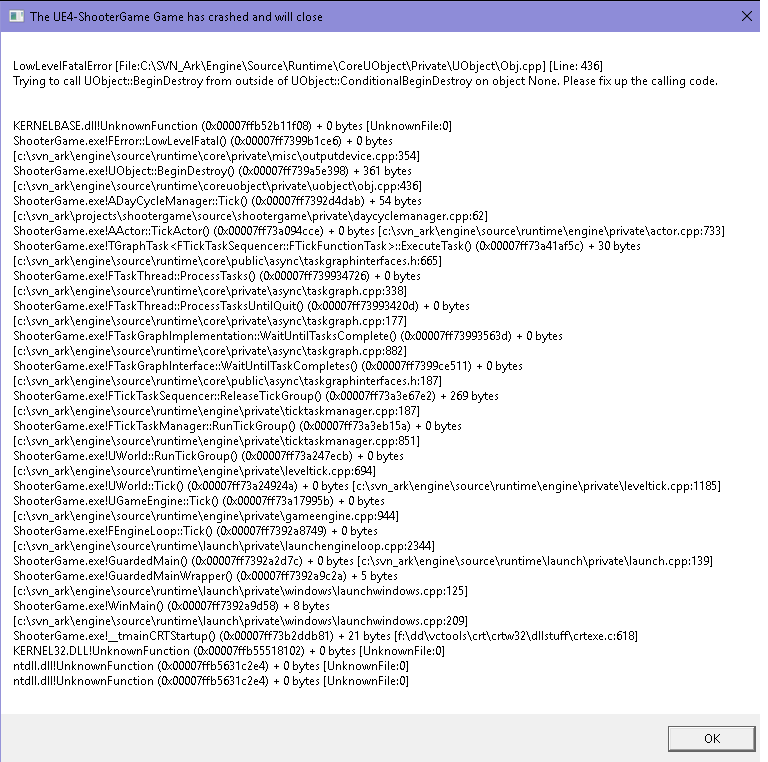 It looks like some of the other “crash” errors posted, but this one seems to be a bit more specific. Just not sure what I messed up on.

Well it’s mostly likely your BP script, or a main mod file that is not referenced when it should be. I had a simple mod crashing my server even though it ran OK locally, so I ‘reset publisher’ in the steam upload window to get a new steam ID and it worked after that.

Where is it crashing? While testing in editor, in local game or on server?

Works fine in editor. I was trying to run a local single-player game.

Most likely a file is being referenced outside of your mod directory and because the client/server can’t find it, it “lowlevel” crashes - as it’s not a critical error.

“Trying to call UObject::BeginDestroy from outside of UObject::ConditionalBeginDestroy on Object None. Please fix up the calling code.”

The most common file that does this is the GameMode, where it has not been reset to default(so it will use the default game mode) or replaced in the PGD with one you may have copied over to your mod folder. Easily missed, done it myself once or twice.

Otherwise it could be any other file that you’re referencing inside of your mod but is not in it.

You were 100% correct. I seem to have missed changing the “Default Game Mode” in my mods PrimalGameData to my mods ‘version’ of it (TestGameMode_[insert whatever mod name you are creating]).

Thank you!!! Works quite well now.