5 players are dropped in to a 3 level arena, with an array of hi-tech weaponry at their disposal - Guns, Grenades, Landmines, Drones, invisibility suits, jet packs, grappling hooks, teleporter and anything else I can code ! They have to choose wisely though as they must purchase their equipment before entering the arena.

RPG like stats systems govern things like strength / Hit points verses speed / agility so you can completely tailor the game to your play style.

No respawns once you are dead you are dead, but win an earn more credits to upgrade / buy better equipment.

Who will you be, the cool sniper, or a brute with a missile launcher.

Did I mention fully destructible arena too ?

Need people to come on board for pre-alpha testing soon, get in touch !

It seems that you can’t get any interest for a project without posting screenshots.

However I have taken the approach that I’ll get the core mechanics working with free off the shelf assets (like the UE4 manakin) FIRST then add my own graphics, objects etc etc.

So what we have so far is a crude inventory choosing screen:

Then the play area (just made of simple blocks), to give an idea of the arena 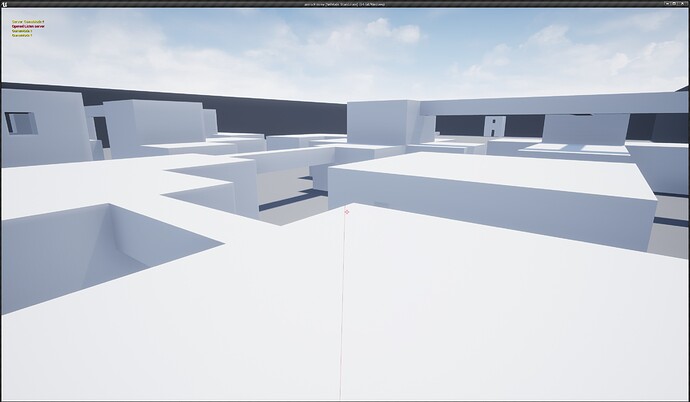 We have network play working for both LAN and internet.

An inventory system, that allows for containers and that shows equipped equipment in game,

In game inv screen that also allows you to still run, and fire while accessing the inv screen.

I know it all looks quite crude, but my focus is to get the core mechanics in place first. Then get some people to play it and work out if this game is FUN first. We can concentrate of the graphics and polish later.

Did you just say “fully destructible arena”??
I’m completely sold. Love the ideas you have and I hope you keep up the phenomenal work.

Much support! Goodluck with the parkour system as well.

Hope this helps and goodluck!

So I know it’s been a while, but I’d thought I’d post an update.

This project is still alive !!
Multiplayer inventory is now working, including recursive containers.
Parkour mechanics are now working, climbing up and also moving while hanging onto a ledge.
The Inventory screen now has a paper doll, showing what items you have equipped.
A targeting system, allowing you to target where a thrown grenade will land or where you will teleport to etc etc.
Cash system allowing you buy purchase items.
Player death and surviving player win states

Next steps:
Add more items, grappling hooks, jet packs, infrared vision, smoke grenades landmines and so much more.
Implement “universal hard points” in game tech that allows for items to be attached to armour and other items. So pistols will “attach” to UHP’s on your thighs armour (where a holster would be) or a rifle attach to your back or backpack. This mechanic allows for a completely flexible and unique load out.
Get game into pre-pre-alpha state so that interested people can start to play test.

Future plans:
Limb dismemberment ! arms / legs can get damaged or even blown off, leading to nail biting last ditch shootouts.
Salvage the weapons / armour of defeated combatants !
Customisable HUD, allowing you to see output from the devices you are wielding.
Add a locker of items owned but not equipped, look at storing these in a database via rest API
Upgradeable weapons and armour.