I made a prototype for my game and now the goal is to create simple multiplayer. I’ve watched provided tutorials and they were really great, but, anyway, I have some trouble. I quite understand how it works, but I’m still a newbie in practise :D.

Issues both for preview in editor and built games.

Any help to any of those would be much appreciated :).

i have multiplayer chat system here
with some other stuff, i think you can addopt it for 3d widget actors.

That’s for the box?

And for ‘1’, how do you know it is not working? And remember that whatever you do on the server, if is not marked to replicate, it will no replicate on the client. If you want the line to appear on the client, it should run on the client.

Ups, sorry, that was for character BT. But it doesn’t work for the object anyways: 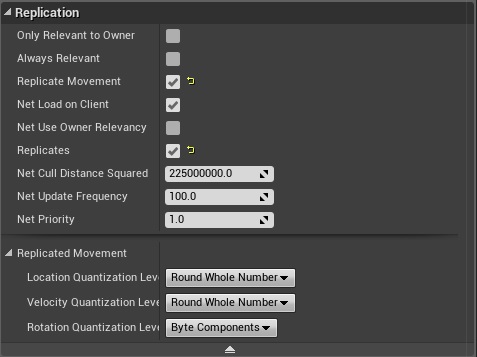 The box is spawned - the function is called by “Set Timer By Function Name”. The function is marked as Run on server. I think I’m still missing something…

I use debug tool and see the flow of execution - the tick flows to the event in blue color and then my custom event in red color doesn’t fire. Normally it does.

It will not appear, but both players can make use of a function marked as “run on server”, right? I saw in Muliplayer shootout mini game from Epic that they use run on server for shooting. So for my line trace (it’s for pushing objects) it should work as well.