Need testers for my demo

Before I release the demo for Overdosed - A Trip To Hell I need to see if it works on other windows computers, obviously.
I would greatly appreciate it if you could test it out just to see if everything loads correctly, ideally on a PC without UE4 installed 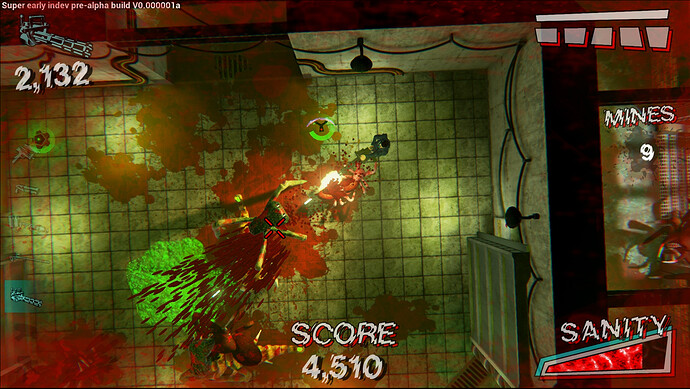 Note: This game has a fair bit of blood and is intended for 16+

Any feedback is a great help too.

A screenshot would be nice

Played a few rounds, only issue I found was that the mouse can escape the Fullscreen onto my 2nd Monitor. This can be very annoying when this happens.

First level running silky smooth on my Xeon MacPro 2008 with HD7750. Gonna test it properly tomorrow. It is 3.30 in the morning here

The game itself is fun. I hope you add more variance too it. At the moment it gets a bit boring while playing
a round. Played one time on Normal. Survived 16 Waves.

I guess you already know about the invisible enemies. Standing still always results in getting damage from them.

The mines, aren’t they supposed to explode if an enemy runs over them? Because they did
nothing at all. I planted the whole map with them and tried to kite the enemies over them, but nothing
happened.

The doors button seems to be a bit overpowered. Planting 2-3 Turrets in this room and closing the doors will
let you survive a wave easily (if there weren’t those invisible enemies).

The minigun is horrible and the sniper feels like a shotgun with a scope.
I also managed to break the minigun. Normaly it starts a bit slow and gets faster (till it reaches this
total annoying sound and feeling for me), but when i clicked multiple times instead of holding the mouse,
the minigun took ages to get back to fullspeed. It started way slower than before and felt like a
double variable needed to come back from 0 to the default value.

So, i hope this helps you getting some bugs out of the game. Looking forward to it.

I guess you already know about the invisible enemies. Standing still always results in getting damage from them.

You know what, here’s me thinking the enemy models arent loading in on some peoples systems… but if it’s when you linger around one area the screen darkens, a static noise comes in and you lose sanity. This is infact a mechanic designed top stop camping, theres no invisible enemies you just lose sanity until you move away. It is described in “WHAT AM I DOING” but I guess people skim over that lol

The mines, aren’t they supposed to explode if an enemy runs over them? Because they did
nothing at all. I planted the whole map with them and tried to kite the enemies over them, but nothing
happened.

They are remote mines, I have now renamed them in demo v1.2 as you kinda expect mines to be proximity based. Check the controls screen for detonation button (MMB on PC)

One thing you might not know about the sniper is that bullets go through enemies, so line them up for ammo efficiency.
I’ll look into improving the minigun as well as certain other weapons. The end game should have much more variety, this is one of 3 themes. To give you an idea another theme will be like a haunted house and you will be attacked by furnature that comes alive.

Ok, my bad with the “WHAT AM I DOING” section and the controlls. I saw the plant button (which was X instead of C on my keyboard) and though thats it.
The mechanic seems to be ok then, although moving a bit side ways (for example between the closed doors in the middle room) will result in not getting hurt.
And i would call that camping too x).

I had some fun with turrets + flamethrower + closed doors, however it makes everything easier, yet fun!
Teleports are nice for quick run to pickup everything and instant return to your little fortress

Also, I don’t like right analog stick behaviour - player rotation is instant and choppy, some SMOOTHNESS would not hurt!

fixed the plant button and yeah the middle room allows you to hole yourself in to deal with enemies better but you still cant just sit in one place holding the trigger down.