So for the last week I’ve been trying hard to master UV wrapping. But there is some weird issue arising with my model and I’m having a hard time getting to the bottom of it. The problem is that apparently I have phantom vertices/faces or edges but in all honest I have no idea what they are since I am unable to find them when selecting them in the UV image.

This is what happens when I select all my vertices in my model in edit mode and use smart UV project. As you see the image unwraps it self but I have phantom points which are related to my model but cant be found. ( shown in the picture bellow ). No UV overlapping issues in UE when importing. 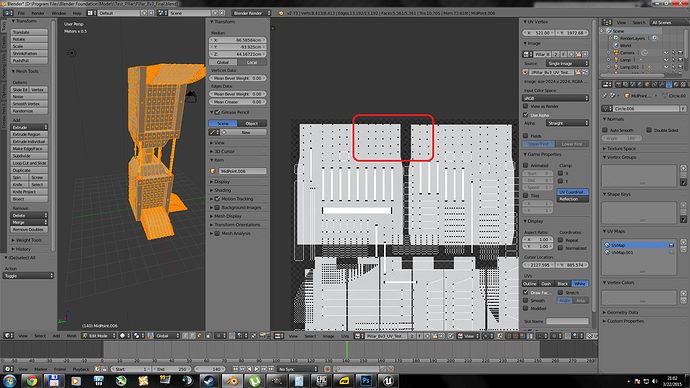 I of course tried another way. I selected faces individual and unwrapped them which worked fine but those phantom monstrosities are still present ( dragged them bellow the UV space ). With this second option I’m getting UV are overlapping by 11% when I build my lightning in UE. ( Yes I have second UV image for lightning ) 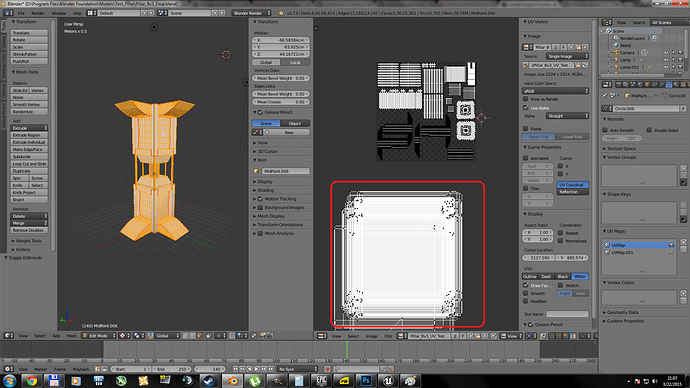 Now I am prepared to revert to my earlier version of the model but I still hope anyone can help me resolve this before I do that. It would also help me to prevent this in the future.

Its hard to tell what is causing your issue without seeing it first hand, would you be able to upload it somewhere and post a link for it?

I can tell you that your model could be optimized a lot more then it is right now, if you optimized it you could probably find the issue easier as well.

I’m not sure but I think there is other pieces of software that can make texturing and painting models a lot easier. i use 3d coat

Its hard to tell what is causing your issue without seeing it first hand, would you be able to upload it somewhere and post a link for it?

I can tell you that your model could be optimized a lot more then it is right now, if you optimized it you could probably find the issue easier as well.

I know that the model is not optimized as I would hope for but it is my first model and the main workflow here is/was to learn 3D modeling and see what kind of issues and obstacles can get in the way. But the main intent was to have a working pro in the end so I defiantly would not mind any tips and help on how and where I could optimize it better

I think my problem lies with having extra faces. That brings out the question. How or why did they appear an how do I remove them?

EDIT: You have to be in wire frame mode to select them

well the first thing to learn about modelling is how to get the right shape:)

now to your problem, I had a look at your model and your “phantom faces” are there, I made a quick gif showing some of them

you will need to get rid of them to properly fix it.

as for optimization tips, I can give you a few to help.

1: use as few faces/verts as possible to get the shape you want, deleting those phantom faces is a good place to start.

2: delete faces you cant see, for example at the bottom of your model you have the bits sticking out and where they touch the main mesh you have quite a few faces you would never see in game. deleting them also means you wont have unnecessary faces on your UV allowing you make better use of the texture space.

3: merge the verts of the subdivided faces that don’t add anything to the shape.

If you want in a little while I could optimize it better and post a link so you could take a look and compare the differences, someone did that for me a long time ago and it helped me a lot.

you posted while I was typing:p

Thanks smokey I appreciate it

I would gladly compare your model with mine and see where I can improve it, if you have the time of course because I don’t want to waste it more as I already have

Again thanks for looking into to this and helping me out. Much respect.

Yup learning as I go

we all started somewhere;)

I would gladly compare your model with mine and see where I can improve it, if you have the time of course because I don’t want to waste it more as I already have

sorry for the wait, just had to do something quick.

ok so it would have probably taken quite a while to optimize your entire mesh so I just remade the top and bottom parts so you will need to redo the seams and UV’s, anyway here is the file <LINK REMOVED>

I should say I just used the edge split modifier to do the smoothing for quickness, it could also be optimized even more but as its just an example for you to learn from I think it’ll do.

the difference between them is more then I was expecting

Again thanks for looking into to this and helping me out. Much respect.

If you want to find polygons that are shown in the UV/Image panel, but which aren’t visible in 3D view, you can enable UV/mesh sync mode in Blender’s UV/Image panel:

This will show all faces in the UV/Image panel (even when they’re not selected). Any faces you select in the UV/Image panel will then also be selected in the 3D view. So by simply right-clicking one of those strange polygons, it’ll appear in 3D view (if you still can’t see it, move your mouse over 3D view and press the decimal point on your Numpad. That will zoom to the location of that polygon).

“Remove Doubles” is a good idea. Be aware that it will destroy any hard edges you modeled by hand. The right way to do hard edges in Blender is to add a “Split Edges” modifier to an object, then (in edit mesh mode), select them, Ctrl+E, “Mark Sharp”

we all started somewhere;)
sorry for the wait, just had to do something quick.

No trouble at all

I’ve looked trough your model and I have to say that’s a big difference. I’ve been doing some searching for mesh optimization tutorials but found nothing extensive. Anyone has a good link to any good tutorials.

I’m off to optimizing.

I’ve looked trough your model and I have to say that’s a big difference.

well as I said I could have done more but I hope it at least helps you improve your modelling skills:), also models like that are easier to UV;)

I’ve been doing some searching for mesh optimization tutorials but found nothing extensive. Anyone has a good link to any good tutorials.

I don’t know of any tutorials(I learned the way you are, by doing) but some of it is in the way you model, the more modelling you do the more efficient your technique becomes so there is less to optimize. you could watch a few general modelling tutorials to see how others create the shapes for there meshes, you will probably pick up on some things that can help you model more efficiently.

I’m off to optimizing.

also I am going to delete the file from my account and remove the link, need the space:)

I think I will rather remodel the top and bottom part with using mostly primitives and join them together afterwards instead of extruding or subdividing. Now as far as I understand you have to build with the mesh being optimized from the start mentality otherwise you are going to get a disfunctional mesh or at least a pain in the *** optimization.

There, remade and optimized Mesh and its all thanks to you guys :). 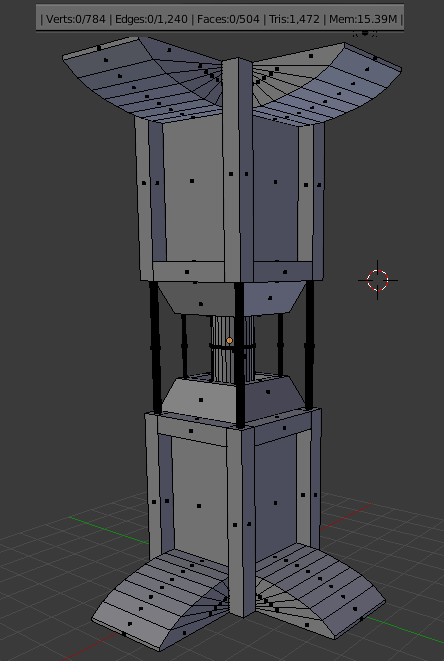 I just have a few question for the UV mapping part.

If I set the image size ( UV ) to 2048 does that mean that the model it self will be 2k resolution ( sorry if this is a dumb question ), I presume yes.
How to make UV image two side. I presume if its 1024 x 1024 it will import to UE4 as two sided since it has the same dimensions.

So after experimenting with UV unwrapping and texturing for a week I think I’ve hit a brick wall. I found that the best way ( correct me if I’m wrong please ) to unwrap a model is to select individual faces and unwrap them ( as shown in the picture bellow ) because it gives you more control over the uv layout than just selecting the whole model and do the unwrap or smart unwrap project. 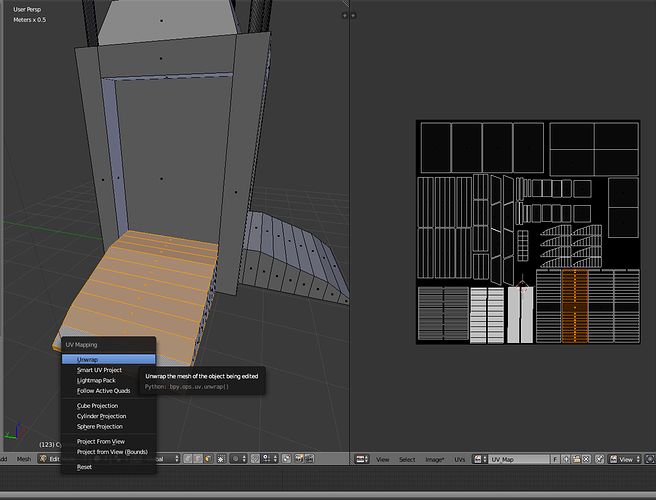 The problem I’m having is that the textures don’t look properly ( again shown bellow ) and am unable to fix them even if I unwrap the whole model together. I’m thinking that maybe it would be better to make the uv layout so that all of the objects fit together or maybe I’m not unwrapping correctly? 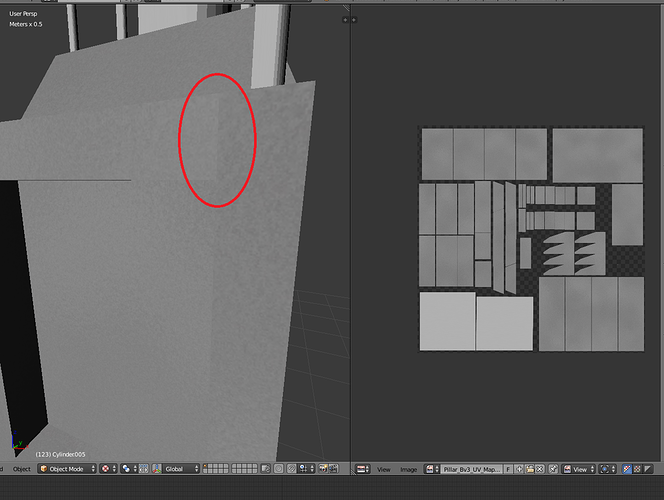 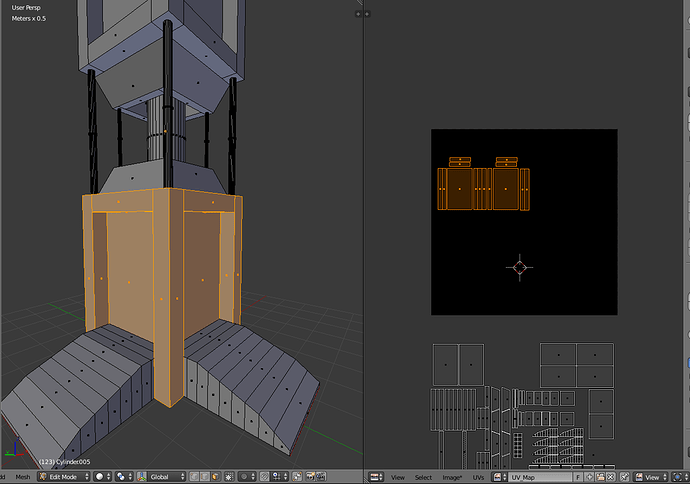 Maybe I’m going wrong with texturing. Should I create a texture for different piece it self? Right now I made a metal texture which I cut out ( considering most of the model will have the same texture ).

I delete the metal layer so that only the background layer is painted with the texture. 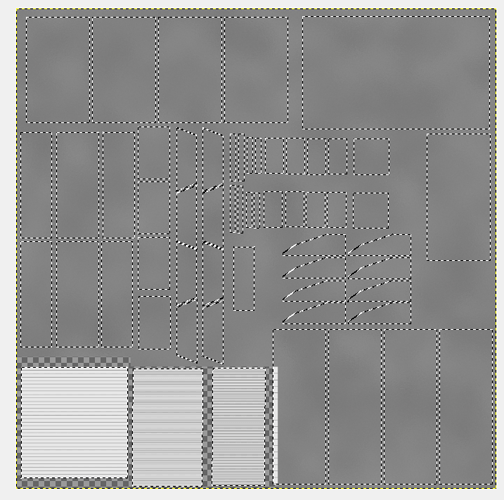 So much questions I know but I refuse to give up

I don’t know how UV mapping works in Blender but I am sure that the methods are pretty universal. The most important thing when UV unwrapping is to make sure you’re shells/islands are relative to you’re models faces, what I mean by that is the size of your UV shell has to mimic the same size as the face that shell corresponds to.

Majority of 3D applications have various ways to unwrap models, using projection methods on different axis or live unwrapping (which for me seems a little less tedious). Live unwrapping is where you use the edges of your model to ‘mark the seams’ where you are going to cut you’re model to make you’re UV shells.

The best tip’s I can give you though is to make sure the UV shells of your model make sense (it will be easier to work with). Try to sew up shells together to make as little seams as possible. Use as much texture space as you possibly can and make sure you’re UV shells mimic the exact shape of the corresponding face on the model you are unwrapping.

well it looks like your modelling level has increased quite a bit:), although there is still room for improvement, anyway onto UV’s.

ok so you’ve tried the “smart” unwrap and selecting groups of faces then unwrapping as you know they both work but the best way to unwrap is to mark edges select the whole model and use the “unwrap” option(smart unwrap ignores your seams) that way your basically doing the same as unwrapping groups of selected faces only much faster.

also for your diffuse UV you can overlap faces witch allows you to use more texture space or use smaller textures while keeping good resolution.