Hello there, I’d really appreciate if anyone could help me solve this issue I have, it’s for a school project and I’ve been stuck on it for too long.
What I need is being able to use the spacebar to activate a message box on each one of these numbered “squares”.
I’ve already made the widgets and by following this tutorial I was able to make the first one work fine, the player steps in, presses the spacebar and the widget activates.
My problem is that apparently you can’t have multiple trigger events like this all in the level blueprint,
so when I try to activate a second or third message on squares 2 and 3, only the widget from the first one pops up.

First widget “Casilla1” from trigger box 1 is showing up when I try to activate trigger box 2.

I’m a total noob, sorry if I’m missing something important.
There’s very few people who know about Unreal Engine where I live and I basically depend on online tutorials and these forums. Thanks!

Not a big fan of the level blueprint myself, I found it to be a pain in the butt in most cases. Blueprint classes is by far the best way to go, specially when you dive into deeper and more complex codes.

Anyways, a quick fix to your problem here would be to add a sequence after the disable input node and link one output to your remove from parent and another to close the gate. That way, your space bar command will only fire from the trigger you’re in. Like this : 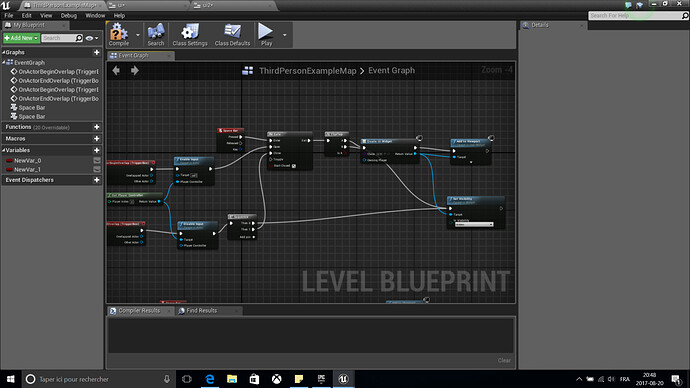 Thanks a lot for your help, I really appreciate it! Thing is, now after pressing the spacebar once I get this error message:

So, I step in the first trigger box, press the button and the first widget does activate as intended, but the second one doesn’t work at all even if I try to activate it first.
This is the only message I get, any ideas?

Here’s what I got after trying to replicate the blueprint in a new project. Same elements, two box triggers and two simple widgets. 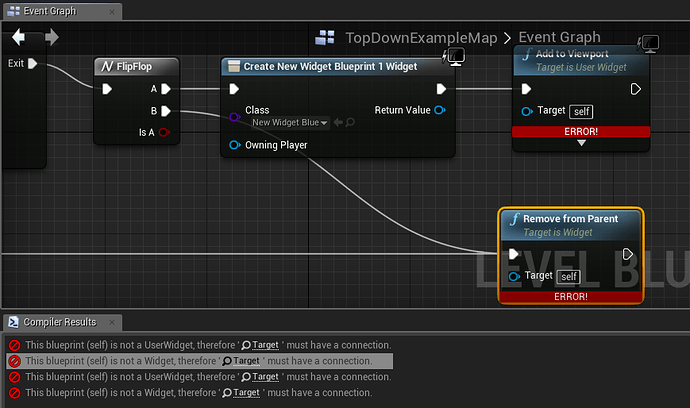 That’s weird. I literally just recreated your blueprint and it works just fine for me. Can’t really tell what went wrong in that first screen.

The second screen though is missing a few connexions from your “create widget” to “remove from parent” and “add to viewport”. Unless it was intentional ?

If it still doesn’t work, try restarting Unreal Engine. One of my BP once stopped working and when I restarted the engine it was working fine after it, for some reason.

You’re absolutely right, the blueprint works in a new project… probably was too tired to notice the missing connexions.
Guess I’ll just have to re-do the whole thing in a new project since I still have no idea what’s going on with these errors,
It’s probably me just messing with stuff and not realizing it until something like this happens. Thanks again!