Need help with automated camera movement at completion of level.

I decided I wanted my player’s view to rise up and rotate around my level (reminding the player of all the fun he/she just had) after reaching the end and viewing the level stats and stuff before the next level begins, but I’m having a hard time with this.

Initially I just tried to Finterp my character location to my desired locations, but, of course, all the gravity rules and things still apply to the character. I’ve tried to disable gravity, but was unsuccessful with that.

I was thinking about a timeline, but don’t see how I can do that when my starting locations and rotations are never known due to the ending portal never being in the same place. (My entire game is pretty much spawned at runtime.)

I was thinking of spawning a new camera at the location of the player camera and blending to that and animating it separately, but I’m not quite sure how I want to go about this, or if this is even a good solution. Before I waste too much time experimenting (which I’ll be doing anyway) I was hoping someone else has run into a similar problem and can point me in the direction of their solution. Already wasted a lot of time (well, not really wasted as failing is really succeeding at learning new ways NOT to do something…) and looking to get this into place as soon as possible so I can move on.

Any help (with examples, if possible) would be appreciated. I’m going to keep working on it on this side, too, and will share my own solution if I come up with it first.

Okay, Here’s my convoluted solution to my problem, but this has ONE problem that I’m still trying to work out: 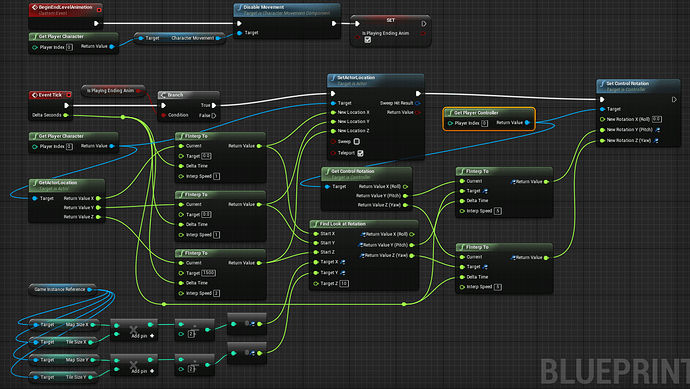 If I use it as is, the player’s view looks straight down instead of out towards the center of the map. HOWEVER, if I bypass the FInterp To and plug the pitch from the Find Look At Rotation directly to the Set Control Rotation (pitch) it looks exactly where it’s supposed to. I’m confused as to why the pitch doesn’t work with the FInterp To, but the Yaw works just fine with it. Thankfully, the Yaw is probably the most important one, but I really don’t like the sudden downward jerk of the camera when it gets to this point. (While it’s not as noticeable when you’re looking straight ahead or with a downward tilt already, it’s VERY noticeable if you’re looking up.) I’m scratching my brains trying to figure out what’s going wrong here since the target pitch should be the same regardless of if I’m using FInterp To or not.

I haven’t attempted to spiral around the map (and I may not need to as this actually looks pretty good) but I can’t do it without getting this working right. Maybe I should just go to bed and come back to it fresh in the morning, but knowing me, this’ll probably keep me up all night.

One more update incase anyone wants something like this:

I decided to change the two FInterp To nodes on the right into a RInterp To. Works better for my purposes, but keeps me from setting different speeds for each value. I could probably use two and split them up, but I’m okay with this for now. 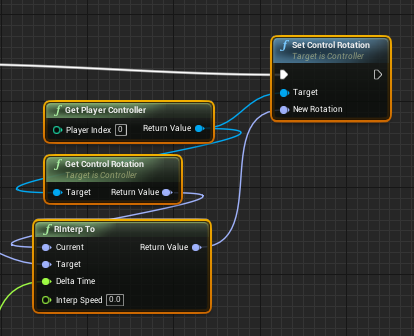 The RInterp To “target” pin is connected to the Return Value of my Find Look at Rotation.