Description:
MineTank is a procedurally created 2D twin-stick shooter with RPG elements. The game has an exponential progression in difficulty, forcing you to carefully use the resources you gather to build better and better equipment or end up facing enemies you have no hope of defeating.

Story: In this game, long ago a group of mining robots and their “Machine Operation & Maintenance” units, aka M.O.Ms, were abandon by their mining company. Lacking human interaction for eons, they eventually created their own society, hidden deep underground. Things went peacefully for thousands of years until one day, several of the larger robots went mad and started forming their own war-like nation, even talking destroying their old gods (aka Humans) and taking over the surface. Subjugated to the will the new “Sector Bosses”, the MOM units were only able to create a single robotic champion, with which to fight back and destroy the Sector Bosses with. That’s YOU. With the help of the simple bots, they also collapsed parts of each level to help slow the army of warbots, and aid in your assault.

Gameplay: Each and every level is breach-situation. You are surrounded by enemies, but all of the random blocks in the way stop most of them from swarming and killing you immediately. You use your sub-sonic mining way to knock down these random blocks in order to gain access to blocked sections and avoid masses of enemies well you pick them off and clear out each level. Once an area is liberated, the enemies do not return. New weapons require blueprints and parts, both of which are randomly dropped from destroyed enemies, as well as completing quests and unlocking treasure chests. Enemies can not be “Farmed” for parts, so carefully balancing Armor and Energy upgrades with new Blueprint creation is important. Even repairing your tank requires resources, so resource management is key to the game.

Check out this video of the current build: 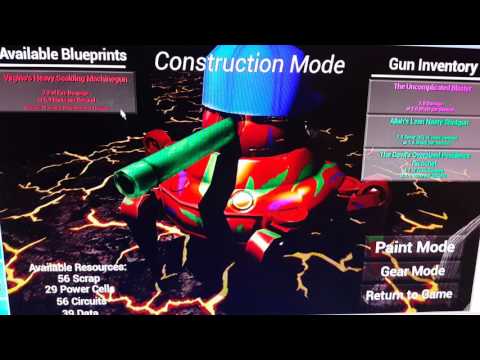 As you can see, much of the game has already been assembled. I need assistance to fill out what I have now and improve it further with even more gameplay elements.

(This project has many open ended elements that should allow people working on it to express themselves in a wide variety of ways, so everyone should get to participate in design as much as they want. If you can do more then one of these jobs, your percentage will reflect your time invested)

3D Artist
-Expected to make static meshes for various randomly generated weapons, robots, environment, pickups (everything is made from parts)
-needs to know how to make FBX assets that can be imported into UE4
-3D Studio Max knowledge will be essential as all templates will be in that format
-Producing easy to grasp 2D templates for Texture Artists and possible fans to use (simple and efficient)

Texture Artist:
-Expected to work with existing templates to create new designs, focused on B&W color channels (ie you make sections in shades of green, blue, and red, then we change the color in code)