Videos of some VFX and a water material I created as part of a project (still in progress) in UE4. 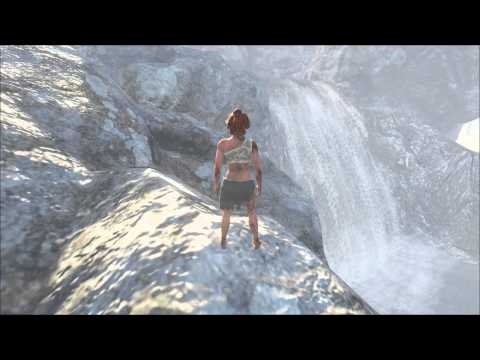 Waterfall and river I created in Unreal 4.The waterfall consists of a base mesh with an animated material as well as Cascade particles utilizing custom image... Still WIP, haven’t yet put these up on my site at www.patrickdoran.net

Overall keep working you are in a good path.

Thanks for the input. I’ll look for ways to improve the repetition.

Currently that fire has a lot of actual particles to make up overall shape. 3 emitters, one for smaller shapes on sides, one for a central tall fire to give it a pointy triangular shape (I believe this is the problem one you’re referring to), and a 3rd emitter that is wide/round and mostly there to keep fire from looking bad from overhead camera views.

There’s currently just one image sequence driving everything with 64 frames at 256x256. I’ll try utilizing a 2nd emitter for central emitter part with a different set of SubUV frames and see if that makes it feel less repetitious.

Explosions I want to redo the renders on to add some more “black” patches for a better transition to particle death.

Blood I’ll tinker with. I’ve gone back and forth on brightness of blood. Most realistic games tend to opt for darker blood, perhaps I’ve gone too dark - it’s real easy for it to look cartoony with just a hint more brightness though, so I’ll be going over that carefully. My goal with blood is to eventually involve 2 spawned decals to handle splats on both the ground on and on character. Currently at a bit of a technical impasse on getting that to work the way I want it though

Blood is tricky to get right. About fire you don’t really have to build sheets, As a rule of thumb usually I try to avoid making sheets for stuff that i can get away easily such as smoke and fire.

Nice start -I’ll be interested in seeing some of the “kinks” worked out.

Blood is tricky to get right. About fire you don’t really have to build sheets, As a rule of thumb usually I try to avoid making sheets for stuff that i can get away easily such as smoke and fire.

I know what you mean about how you can definitely do fire with other methods than image sequences.

Originally the fire utilized a more material-side solution involving a great deal of UV distortion - inspired by the ImbueFX tutorials. I tinkered around in both Maya and 3D Max trying to get a good “small fire” image sequence for use with the explosion spell and ended up trying it out on the camp fire just for fun. It improved the visuals vastly and improved overall performance costs by a ton as well since the image sequences allowed me to run it as a GPU system. There’s 64 frames to work with and quite a lot of movement over the course of the sequence.

So now I am varying a lot between which emitters use which portion of those 64 frames in order to increase variety to get rid of the repetition you’ve pointed out. There’s a certain point between frames 50-64 that is very iconic and spikey that I think is a very clear “tell” that you’re seeing same thing again. On one hand, it’s very interesting, on the other hand the timing of the repetition was not irregular enough. Based on some study of fires (fireplace videos on Youtube in particular) there is a tendency for certain “spikes” to re-occur quite a lot, so I don’t want to fight that too much, but there is a chaotic tempo to fire which I want to get too.

I’ll have another vid up soon.

learn to create sprites the old fashion way i suggest. “The dark side of texturing” is a nice book i used a lot of years when i made my first steps to learn some stuff, By tweaking on the methos and implementing your own you will get great results. 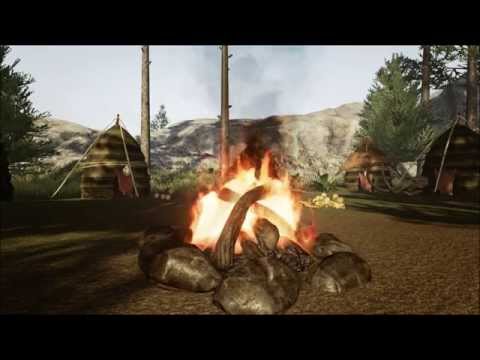 Correct. They’re WIP elements for the game I’m trying to improve upon and just generally gather opinions on for future ideas. There’s a lot more to come!

Reflections are heavily flawed due Unreal 4’s inability to properly handle reflections with translucency in material, but at the very least there’s some substantial darkening toward waterfall area near rocks now rather than super bright sky reflections, so it’s a substantial upgrade in general to the aesthetic. I’ve also included a general look at the material nodes I’ve used (sorry it’s not zoomed in more). 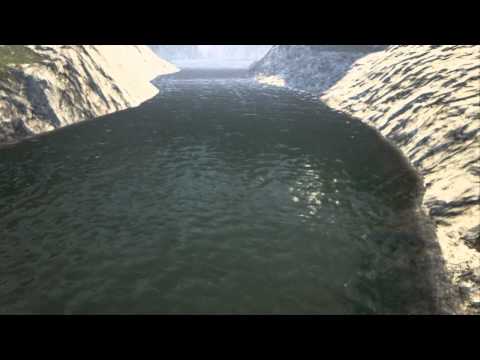 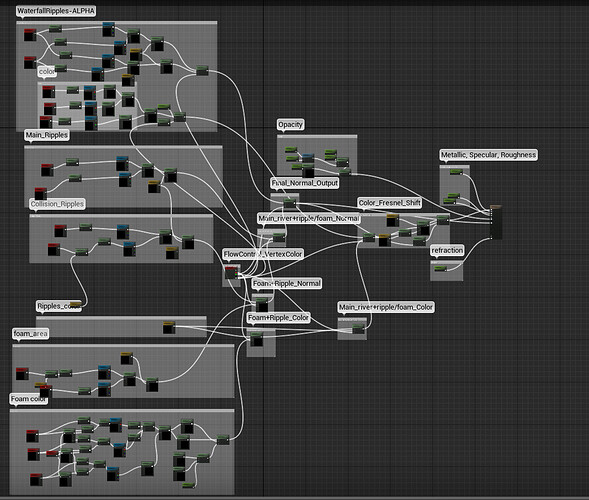 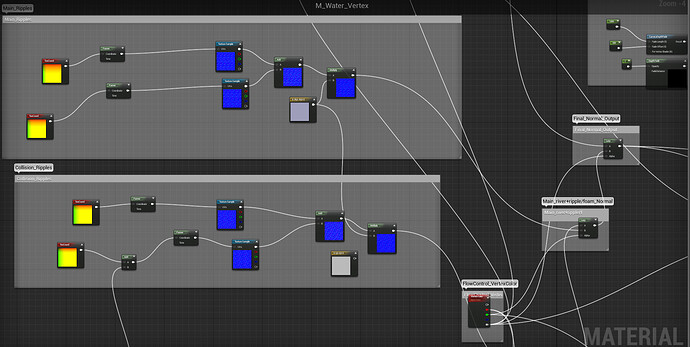 Just in case anyone is curious what I mean by flaws, I outlined some of them in the youtube video link but I’ll repost here:

On the subject of reflections with translucency - it does not remain accurate for the entire length of the river. Additional Sphere Reflection actors either do nothing or completely override the original rather than subtly adding capture detail in different areas (changing reflection actor scale/influence does nothing in this regard). This only applies with Translucency. Doing the exact same setup with an opaque material yields nearly flawless reflections - this is a translucent-specific issue, so if you don’t have to make your water partly clear (like ocean) then don’t do so until Epic updates the translucent reflection behavior.

I should also mention that the general engine behavior in regards to reflection captures is highly erratic with translucency. I suggest doing “Build” AND “update captures” AND saving your map then using Simulate or Play to actually see the results. The default preview editor window does not always update accurately to the translucent reflection behavior. Also, it appears that placing sphere capture BELOW the water CAN help - but again, it’s erratic. Sometimes update of reflection captures will be spot on, other times no. Sometimes it will work in Play, but NOT in Matinee Movie capture.

Personal opinion: the camp fire in your original post is better. It feels less generic, and I honestly only noticed the repetition once I was watching for it after reading DieByZero’s comment.

I’m sorry Frag thats what I do for a living, Sit down and watch for other people mistake

Nah it came natural to me the first time I watched it, It’s a bit broken i believe now though not so obvious but since it’s a tendril once you see it BOOM.

What are you sorry for? I was simply providing my opinion on his work, hoping he can use it somehow; you don’t have to walk in here and try and put my comment down.

What are you sorry for? I was simply providing my opinion on his work, hoping he can use it somehow; you don’t have to walk in here and try and put my comment down.

Re read my sentence it’s a joke lol

Personal opinion: the camp fire in your original post is better. It feels less generic, and I honestly only noticed the repetition once I was watching for it after reading DieByZero’s comment.

Yeah, I’m still a bigger fan of my own fire than the water -I feel like better reflections on translucency would allow me to push it a bit further, but that’s up to Epic to sort out.

To a certain degree I actually want some repetition on the fire honestly. I watched a lot of Youtube videos on fireplace fires and campfires for reference and learned a lot :). Sometimes our expectations of nature are more interesting than nature itself - sometimes more boring! See if you can spot the repeating flame elements in this “unrealistic” fire. 3 solid hours and the flame shapes really don’t vary much over the course of a minute. After about 5 minutes they add in a second log and that changes things. 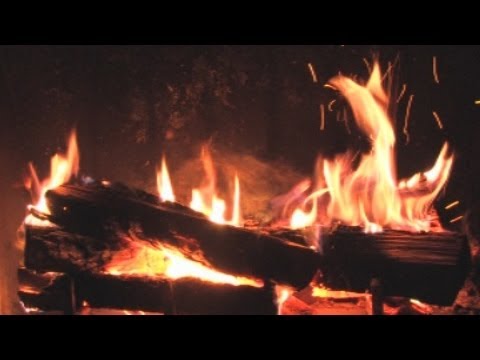 With a large bonfire repetition isn’t so common, but with smaller camp fires and fireplace fires there tends to be certain flame “spikes” that repeatedly flicker over and over due to the unchanging shape of the fuel source and low intensity of the burn.

as long as it looks nice and it’s not having huge “errors” it should be fine.

This water looks great to me! Will you possibly release the material soon? Thanks and keep up the good work!

This water looks great to me! Will you possibly release the material soon? Thanks and keep up the good work!

It’s not a tutorial, but here’s the material setup (warning it is big)

Here’s what the forum will allow me to show.

Some basic details to keep in mind.