Hiya! Since I’m probably going deeper then I should with this, are there any monster hunter lovers who want to bring some of those glorious creatures into ARK? Well, here’s your opportunity! I want to start with Nargacuga, but no monster is off limits for this project! This can include Frontier monsters too (as I am a frontier player I have access to all their sounds ;)). So, anyone in? Some of the things I can do is modelling and sound creation (Since I have the sounds on my computer). I sadly don’t have The Dev Kit because my internet is rather slow, so downloading it would take a week strait.

In case you aren’t getting any feedback, perhaps you should list the kind of help you will need and some WIP pictures you’ve got so far.

It would also help if you suggested the kind of details you’re thinking of, are you planning on making a new map to fit the MH Style Animal/Dinos/Dragons. Are you thinking of doing a Dino replacement, or are you just thinking of adding extra dinos to the vanilla map.

Me and a friend have procured an Alatreon model, I’m going to be rigging that and start animating it, some of the help that we need is like getting the model and animations working from Blender over to the ARK dev kit, uploading to steam ETC. I’ll get some pictures As soon as I can.

EDIT: I’ve recieved the model, and am working on rigging but the model appears to be in multiple pieces… Any help I can get with that, or does that not matter in the long run?

What we’re looking on doing is basically adding the monsters in as a addon, as to not ruin any spawns already present.

I just started playing on the Center map and one of the first things out of my mouth when my tribe said they wanted to base in the jungle was “Wow, this reminds me of the first time I played Monster Hunter, on the PSP. I’m expecting a Yain Kut-ku to come screaming out of the woods at any second.”

I’m deeply interested in this, and would love to throw some assistance your way with stuff and things. I would honestly love to see a huge overhaul mod, like Annunaki Genesis, that replaced all vanilla spawns with MH spawns. Looking at the herbivore list alone, I can already see how many of the creatures can replace the herbivores and their many jobs in Ark. Herbivore | Monster Hunter Wiki | Fandom

Where did you get this model you found? Was it a rip? What game was it ripped from? What’s the file type? Depending on how it was ripped and what file type it is, I’m sure you could merge the seams and unwrap it for retexturing super easy in blender. There are a few ways you can go about doing that relatively headache free if you’re a clever dog.

The model we recieved was just from a community model site, Model-Resource. But if you want I can The model is a OBJ file, if it’s just easier to put it strait into the DEV kit that would work. A total conversion would be amazing, I agree! The friend whom I am working with has also put up multiple Monster Hunter dossiers (My favorite of em is the Narga <3) Which you can see some of em here: 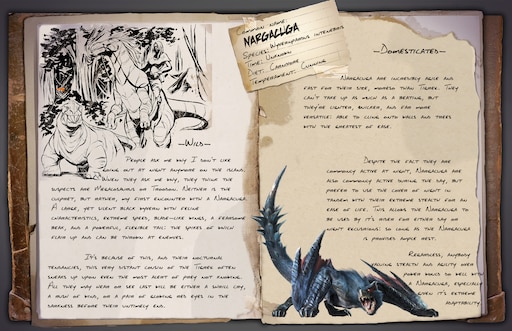 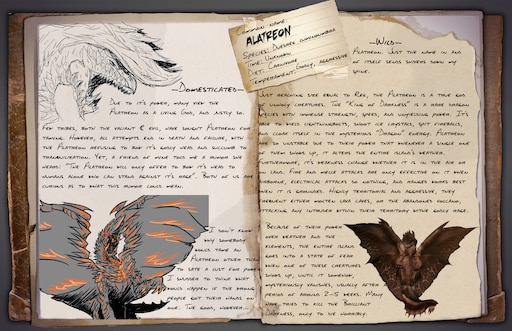 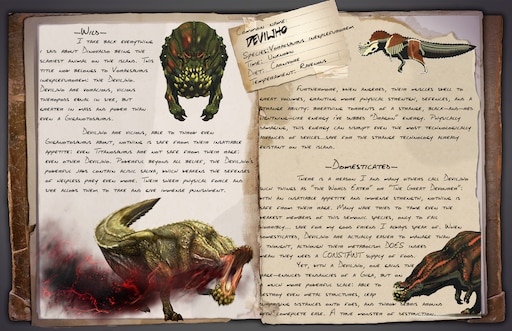 i will please tell me when and where

I’ll at least take a look at it! If it’s too much work for my currently busy schedual, I’ll have to regretfully decline, but I’m sure it won’t be too much of a fix. Either link me to where you found it or upload it to dropbox or something and shoot me a link.

Also, those dossiers are cute. I dig it. I would love to ride (what I lovingly refer to the deviljho as) a ‘dancing pickle’ around the island. <3
And if you can’t find animations, even though it would be a huge undertaking, I would deeply consider helping you out there.
I’ve played a lot of MH and as a person who uses long swords a lot, I’ve studied the moves of nearly every creature with artistic clarity. Many of them actually reuse the same attacks and animations, but with their somewhat different rigging, it’s hard to tell between some of them. You can see in closely articulated creatures like the narga and the tigrex, but it’s hard to see how the deviljho and duram have similar attacks since they move at different speeds and have two very different signature moves that are specific to their species. Pretty much all creatures of the same class share animations with others of their class.
What am I talking about? You probably already know this. XD

Just let me know how far you are and how much time you’ve already invested in this mod and I’ll figure out what I can do!

We’re actually still in the beginning process, we don’t have any animations and only the alatreon model. This project doesn’t need to be a quickly done project, just at convenience is fine. I can make the models and if we could get rigger and animator and someone to impliment into the Dev kit, we should be set!

Hey there,
First of all i’m a total beginner in programming but i love Monster Hunter as hell and it would be amazing if there’s a mod in ARK. I want to help but maybe your skills are even better than mine. I just wanted to say that i’m interessted and maybe later when I learned a bit more I could help with that. For now I’m working on my first mod project, that you can fly around with the Normandy from Mass Effect.

Hey, any and all help is appreciated! If indeed it needs programming (Which I am not sure it does) I’ll let you know!

So! I figured i should start working on this even though we don’t have everything we need. I’m going to begin work on a Mizutsune model today after homework. If i could get a skinner, rigger/animator, and someone who can organize it all in the dev kit we’d have everything we need to get the Monster Hunter mod rolling! It’ll begin as just a add on mod, having the monsters as spawn ins via admin command, but once we get enough working monsters we’ll make it total conversion!

EDIT: i might need another modeler too, seeing that Idk how good I truely am hahaha anyhow here is my progress on the Mizutsune! 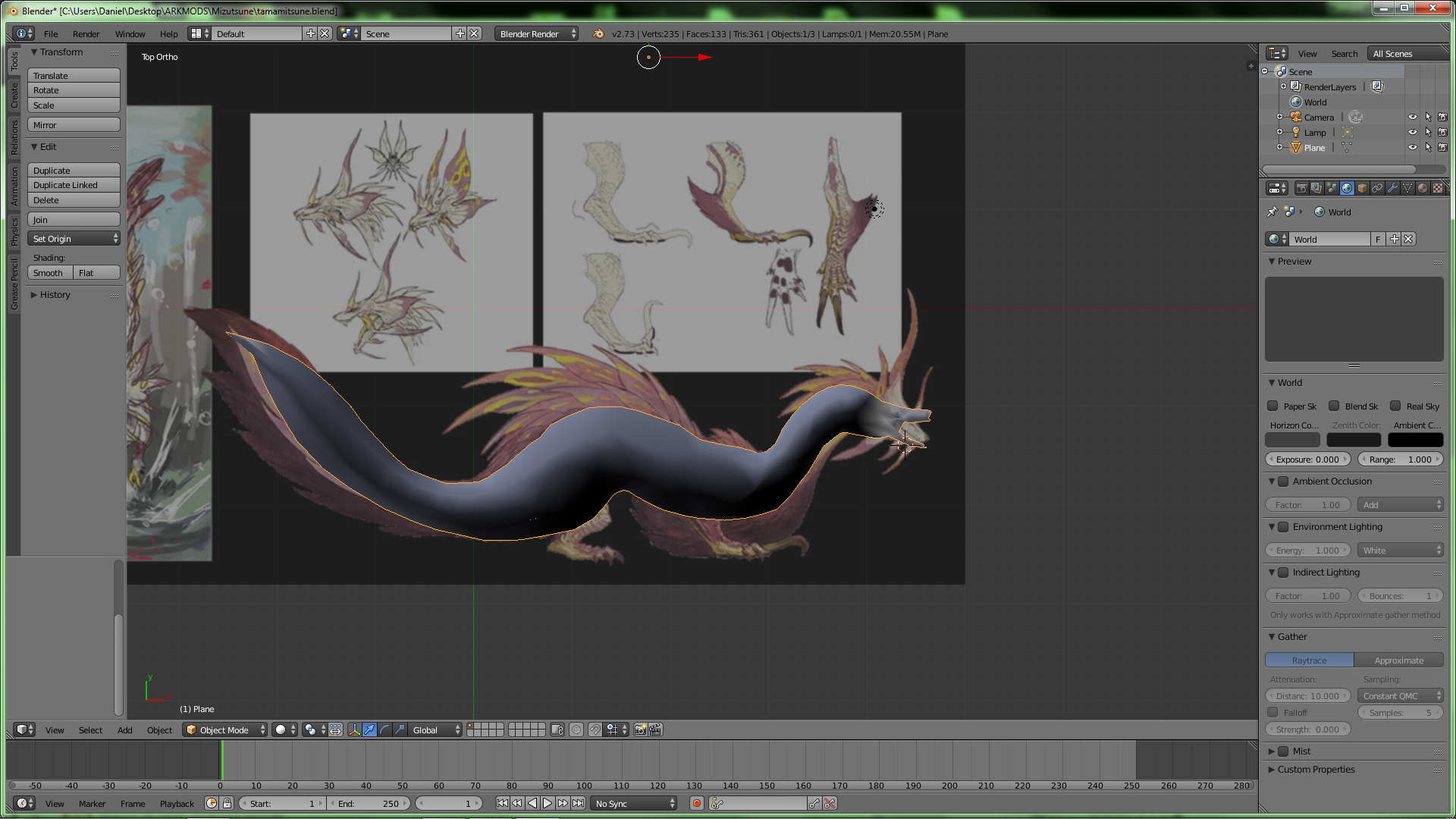 Ohhhh, I wanna help with this. I wish I had the skill to assist…