Hey everyone, I’d like to preface this by saying this is just my thoughts on the tool as a character artist who usually primarily works in zbrush/maya. The tool is fantastic and is a great asset to the gaming community. I feel as if there are some rooms for improvement however, for those who are used to really being able to refine face sculpts to their liking.

One of the things I noticed straight out of the gate was when manipulating the sculpt handles for each feature, you tend to move other areas you don’t want as well. This was very much evident with the nose and mouth especially.

For the nose, one of areas I like to tweak to give a face identity is the nostrils, tip, and sellion/rhinion.

In the case of nostrils, currently you can’t really adjust it without modifying the entire lower half of the nose, tip included. If I wanted to widen the nostrils, or raise them a bit - doing so would alter the entire nose tip as well. This made it difficult to get nose shapes I wanted to create. Another thing I noticed was a bit of a clamp on the height of the nostrils. Photo example: 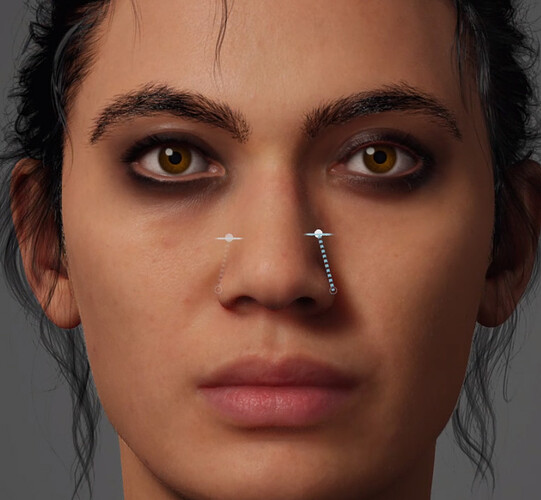 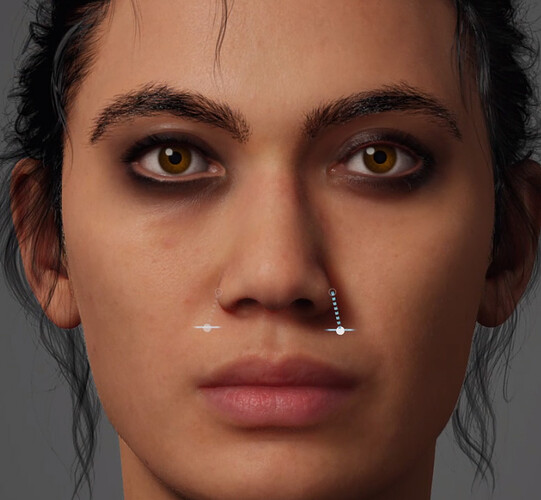 Tweaking the sellion and rhinion was another area that I found difficult, as it would also modify the shape and angle of the nose tip.

Another notable mention is the eye shape. It seemed like even though there were multiple handles, all I could do was determine whether the character was squinting, the thickness of the lids, and how far it sits into the face. Eyes are another very vital area when defining the look of a character, and being able to have finer control over the shape of the eye is definitely useful.

Another area I found myself very limited was the forehead angle.

As it stands the overarching shapes are more determined by the blends than actual user manipulation. And again, this isn’t a bad thing. You can create some pretty cool characters using this, not to mention rather unique. But when you have a particular look in mind it’s almost impossible to achieve it with the current limitations. Which brings me to the next point:

External manipulation. I believe I read somewhere on here that you cannot modify these assets and then re weight them to the skeleton without causing serious issues? Is this true?

If so then that’s very unfortunate. Zbrush (Or any other sculpting program) would have been a viable alternative to be able to put the final specific tweaks I’d like to be able to as a character artist. I’m sure we could still do so if we were planning on creating a custom rig rather than using the existing one, but then that would sort of defeat the purpose of using the setup from MetaHuman Creator as it allows you to have a face rigged and ready to go right out of the box.

I’m not sure if this is something that’s in the cards for the future, but more body types such as muscular and being able to manipulate them similarly would be incredible. Especially as a base body from which we could build clothing over in Marvelous, or armor in our favorite modeling/sculpting programs.

Which brings me to the next point, the bra. This severely limits the sorts of clothes and armors you can make for the female base body. It appears to be textured on rather than a mesh, so I’m curious if there might be a way for an alternative texture or option to be available for those who might want to remove that?

That about does it for now I think. If I can think of anything else I’ll be sure to add it to the thread or make a new one.

All in all this is a fantastic tool and I’m very grateful to have been given the early access for it. I’ve spent quite a lot of time already making different faces. I feel like with some additional features and control ability as mentioned this tool could remove the need for me to use zbrush altogether when it comes to creating base bodies or character faces.

Looking forward to seeing how this tool grows over the months and years to come. Thanks for taking the time to read. =)

I am fairly new to this, but I agree fully, my question to you is, as I am about to get into Maya, after finishing a prototype , seeing that you are a pro, with both Maya and Zbrush, do you have a complete from sculpting to animating - rendering workflow, so I can do it myself! All those little tutorials make me giddy! There’s always , something that’s not working in, version so and so , for Mocap I use iFacial mobcap, and maybe Facecap, but the support is lousy. Another option could be to buy 2 ARKit ready sculpts, male & female, for me to tweak, and sculpt , so that the topology is better then when I would do at this point in time , cheers … awaiting an answer svp!

I have a particular workflow but don’t really have any tutorials on it. I sort of just taught myself for the most part. But essentially when it comes to faces I begin in Zbrush with a base sculpt and then tweak the facial features in the first or second subdivsion to get the shape I want. I would then create different expression face morphs once I’ve settled on the look. I haven’t really delved too deeply into facial capture with LiveLink or anything like that yet. Just starting to get my feet wet in that area.

My advice would be to find a good base body sculpt if you’re a beginner, and just go from there. For the most part MetaHuman Creator seems to have a decent asset when it comes to the body too, though I’m not sure how dense the topology is for the body. Though I’d imagine it isn’t too much. You should be able to start there. =)

The only way I can find to get bare feet is to choose Flip Flops and remove Feet from the blueprint. I’m finding all the same limitations with face editing as you mentioned. Many of the handles seem to be redundant and tend to have too large an influence. There are many realistic face shapes that aren’t possible currently. The shape of the ears, especially size is a big limitation…they simply morph into different shapes as you move them up and down.

As far as Maya source files, you can set up your download settings in Bridge: select your metahuman, click the gear at the bottom right of bridge, select Download Settings, Models, change the Metahumans dropdown to include Source Asset. The Maya scene will appear under a folder called asset_ue_source/MetaHumans/Name/SourceAssets.

I’ve opened that maya scene but every time I do it just includes the headless body. I get a message about unknown nodes that have been removed and animation layers being merged. Not sure if that could be the cause of it not including the head, but I can’t get it for whatever reason. =/

Agreed with everything you said. Plus, I think the eyes area is absurdly hard to nail. I just want to drop it into Zbrush with GoZ, fix everything I need, and reimport haha

There’s a way to do it in Maya, but there are problems in the eyes and mouth area. They should stay aligned to eyelids and the opened mouth in order to keep the facial rig.

Well, at least, it still is the best tool around and it’s free.