All am trying to do is confirm that my gamemode is the first thing spawning for my game so that I can manage all other actor’s beginplay functions to specify an order of construction. I’m trying to print a string to the console once gamemode’s beginplay() function is executed: 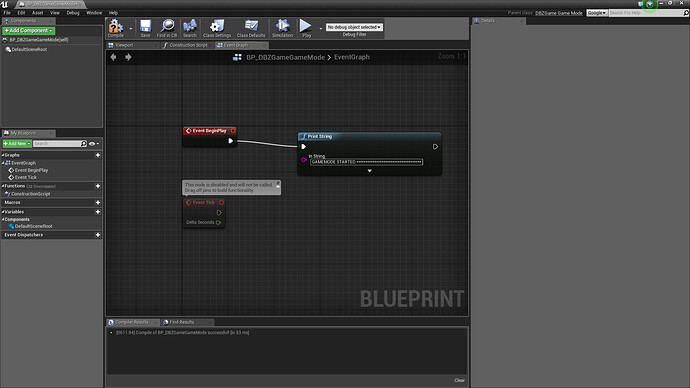 However no string is being printed to the console log. If I do this in the construction script of gamemode then it works once I hit the compile button.

Just so you know I have already set my gamemode to the default gamemode in project settings as well as in the world settings panel for the level. What am I missing? Thanks for any help.

You’ll want to make sure your default level is set right above that setting as well.

Yep, did all that. That’s why I’m so confused as to whats going on.

The only thing that might have some effect on it is I created my own levelScriptActor_BP and re-parented my level to that but not sure how that would effect the gamemode.

I wonder if the gamemode is loaded once in the editer when the level opens. If you run in standalone do you get the gamemode debug output?

If I run it in stand alone does the output log still apply to it? Also, if I try and print the same thing within the BeginPlay() function of my C++ Gamemode class, then it works. So it seems to be the Blueprint that is malfunctioning. Could this be because I had deleted an old gamemode blueprint of the same name previously? I deleted the old GameMode_BP, saved and closed the editor, then reopened everything and created a new GameMode_BP (which is the one that currently is not working).

It could very well be. I have had lots of trouble when I rename, reparent, or recreate blueprints. Creating a new blueprint with a new name and copying-pasting nodes is the best way to make something similar without subclassing that I have found.

I agree so much that I spent the time to reproduce one of the errors and report it.

If you have the time to do the same thing, it can really help! If it gets logged as a JIRA bug, you have a good chance of a developer actually fixing it.

Blah, ya that’s one thing that has REAAALLY been annoying me in UE4, given that software is suppose to be an agile process and renaming and deleting classes is extremely common. I would much rather seem them focus on this issue then add too many new features to the next version.

Wow thats great! Okay I’ll try and mimic what you did as I haven’t reported an error before.

It’s best if you can find your own way of creating an error condition and report it as a new “question” post.