I had been follow this tutorial 3 time now and still got it wrong…
https://docs.unrealengine.com/latest/INT/Engine/AI/BehaviorTrees/QuickStart/index.html

Do anyone know if there are a mistake in tutorial or I done it wrong?

How can anyone know if you have done something wrong if you don’t tell what you have tried and how your behaviour tree looks like at the moment?

Thank, and my bad… 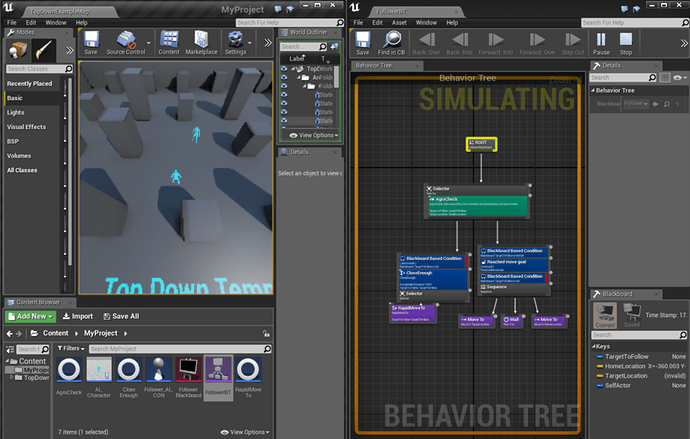 and there aweblink to answer hub, for my guess where i got missed… i have no idea.

Given what you are showing, neither section can work due to the Blackboard Decorators and TargetToFollow is never getting set, which is probably due to AgroCheck, and the one bit most often skipped is on:

The variable list has a DesiredObjectTypes Array, and you have to add an element to it and set it to Pawn (eg: create your variable, change it to type EObjectTypeQuery, make it an array, compile your blueprint, select that variable, in the details panel under default value, add an entry, set that entry to Pawn).

(TargetLocation being invalid is interesting as well…) 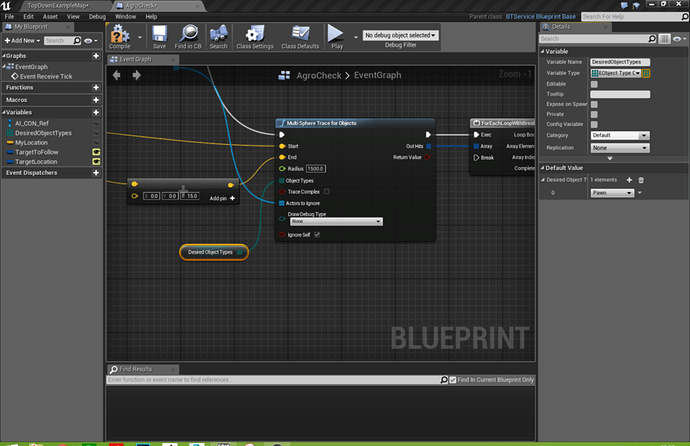 Actor to ignore ? delete him or show us what he is.

With a help from membership of this forum, they still can’t find my answer and why my AI don’t move at all…

I just go backward instead of moving forward…

Dan, there are some examples which work out of the box, and use a BT. Though, this might not be teh best answer but i for one had best results with not using BT. I literally spent days trying to make a BT modification, without success. The example you follow works, if it isn’t working you missed something - which is rather easy to accomplish, especially when you starting with Unreal.

I currently use basic Move to AI + PawnSensing event, then a Patrol AI with an array of Target Points. I’m satisfied with that, without using BT. Maybe try that approach, or if you want a working example check:

Both come with ready to use example projects…

Thank! I just download 4.7 version of that AI. I guess I’ll use that for prototype game while I find better AI. Maybe I’ll use this AI and improve the behaviour tree?

Will update soon as I got my AI work how I want.

After look at example from early post… I just fixed “invalid” and here what I got reach so far. 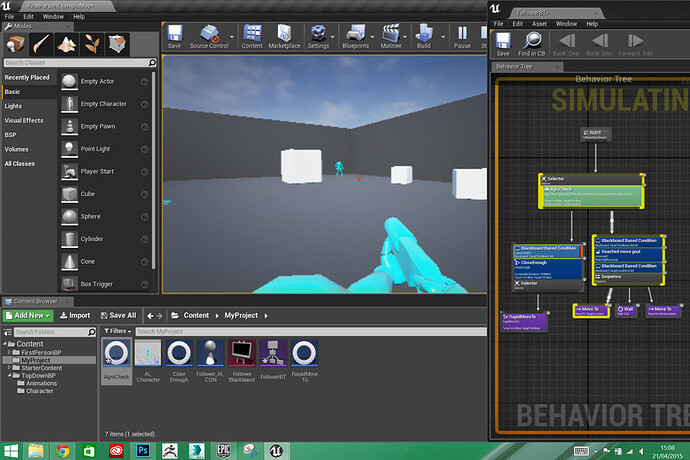 and I set this AI to be Blind and only chase by trigger. Similar to Garrador from resident evil.

it fail to chase down player…

this is what I need to finish my prototype game.

I think that there is a bug with decorators when placed on composite node. I have a similar problem see: https://answers.unrealengine.com/questions/218512/476-bug-with-behaviour-tree-decorator.html

Happy to see that I m not the only one

Maybe, I just got AI chase player fixed by Line trace mini bug - when you connect object to target slot, I spot there a “target” is blank and click on very small arrow for drop down scroll and click on target object and check in all other “object” connect because it do not automatically update for some reason.

And in line trace, switch to target camera in other small arrow drop down scroll.

I will updated soon as I got everything fixed what I want AI to do.

Hi - for anyone else having this exact same issue - I had it first time and it was because I’d forgotten to set the radius to 1500 in the Multi Sphere trace for objects (had left it at 0.0 and got exact same symptoms as OP)