Currently I am creating an editing tool with which you can manipulate multiple objects using an actor which serves as a cursor or pivot point. At the moment it is possible to move, scale and rotate objects with this cursor actor.

Below is the code as well as a short GIF to demonstrate how it is setup at the moment:

Question: How to rotate the objects around the cursor instead of themselves?

I hope I was clear enough. I’ve already searched for a few solutions but I must be doing something wrong since I get strange glitches and I didn’t manage to make the objects revolve around the cursor.

I’m happy for any kind of advice,

Thanks for your suggestion. Note that I need to implement this inside the code you can see above. Im’ not really sure what your are suggestion so let me explain a bit and maybe you can help a little better:

a) Just to be clear the ‘pivot point’ or ‘cursor’ is a Blueprint Actor inside the scene and while you move or rotate this actor, the objects need to adjust accordingly (which they do like shown in the gif above).

c) When you say ‘when you rotate your pivot point, rotate the delta vector too’ then this is exactly what I’m asking: How do I do this? A small code example that fits into my code example would be very helpful

Thanks a lot for your advice, you are very much appreciated!

Since you already have the delta vectors, this small extension should work:

Solution with no code at all. 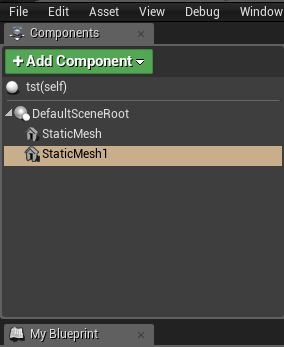 this is not helpful at all!

This is perfect! I was really overthinking this stuff and making it much more complicated than it would have been. This works like a charm, thanks a lot!

Now we know that you’re not

happy for any kind of advice

Maybe you can help me a little further, there was a small problem. I’ve tried to apply additional relative rotations to my objects, however the rotation is locked to one axis when I rotate.

Here’s a small gif that shows what I mean:

Obviously this is not working quite as intended. Instead of rotating the objects relative to the rotation around the cursor the rotation of the objects is locked towards one direction… this the code I use:

As you can see I have simply plugged in the rotation of the respective object into the final result of the Transform… The effect shown in the gif above seems to be logical but it’s not what I need.

I have tried to use ‘CombineRotators’ and other methods but this gave me at best some unwanted ‘spinning’ results… This is really a little beyond me so I’d appreciate your help very much.

I hope you can spare the time otherwise I’ll just try a little bit myself and if I still have no luck, I’ll probably need to make this a separate question…

I’m glad I can help. Normally I would have tried using CombineRotators, too, like this:

But since you said it doesn’t work, this version is more awkward but should be more stable:

Hi there, so I was testing it a little bit out and ‘CombineRotators’ seems to be the correct solution. The problem with the spinning thing has probably to do with my setup and how this works in the construction script…

Apparently, when I grab the rotation and start moving it, instead of combining the Rotators only once it seems to continuously add the respective value as long as I hold onto the rotation, which results in a spinning effect… Here’s a gif that shows this problem:

Maybe you know a solution to this problem as well?

Thanks again, you are really helpful!

I guess that you pass the current object rotations as ObjectRotation, but because the construction script is executed each frame you hold down the mouse button, the cursor actor rotation is constantly added (as you said). But why doesn’t the same thing happen to the offset vectors? Are they gathered in a different way? Perhaps you can apply the same way for setting the object rotations.

))) I know what is going on, but unfortunately you don’t want my advice)

Is this you are looking for?

@ Two-faced, If you have any valuable input, then I’ll gladly take your advice… I’m sorry you took it so personally, it wasn’t my intention to hurt your feelings. Your previous ‘solution’ wasn’t helpful because it didn’t seem to relate to my question and there wasn’t any explanation to it. If you know the answer to my problem then, by all means go ahead, everyone will thank your for it, including me!

@ Benergy, The data is gathered from the same source, I think the same doesn’t apply to the offset vectors because we are dealing with a Quaternion for the rotation, which is a little more complicated. However it must be possible somehow right? @ Two-faced, care to share your knowledge with us?

Oh god how do I love procedural generation!

So is there a way to do this inside my code? Because I believe your are doing this with Static Mesh Components inside a blueprint and move the actor itself right? Maybe I’m wrong but in any case just to be specific:

If you have a solution for my specific case, I would be very happy to hear how I need to modify my code above in order to make this work. Keep in mind that I need to have this for all the rotation axes not just one or two.

A blueprint rotator object is not a quaternion, but a struct of roll, pitch and yaw.

What I meant with the offset vector was this: When I assume that the offset vector is gathered with every call of the construction script, it would change every frame when you rotate the cursor actor (like the rotation currently does). But then you would rotate a vector that was already rotated last frame, so you would have the same spinning result for the location of the actors. But this was not the case in your last gif, so I assumed that you gather the offset vectors differently than the “offset” rotation.

UPDATE: After a bit of time I think I could pin point the problem and found a workaround as well.

In due time I will file a full report of this behavior and issue a Feature Request, would be immensely practical if this detail could be fixed or if there’s a way to device some better workaround than the one stated above.

@ Benergy, Thanks again for your help!