I struggle with an issue about replicating an anim montage in a multiplayer setup, in a task of the AI’s Behavior Tree.
Everything else works perfectly, the behavior tree, every tasks, the anim montage itself is correctly played on the server side because the Anim Notify State is correctly trigger and executed, but I can’t achieved to correctly replicate the anim montage on the client side.

Its weird because I do the same thing with the Player Character, a replicated anim montage when I attack, and it works without any issue, its correctly replicated.

I’m asking if playing an Anim Montage inside of a Behavior Tree Task is a good thing ? Maybe the issue come from here, dunno. 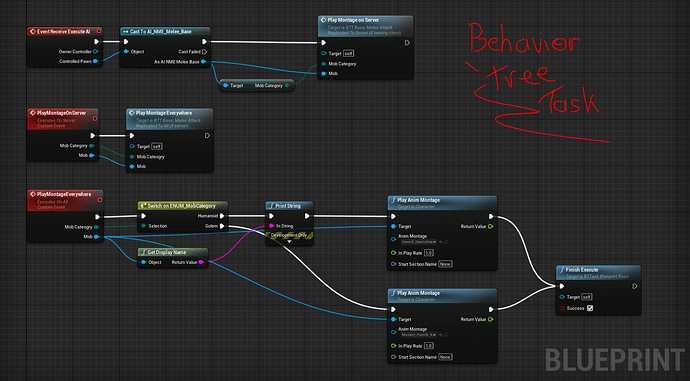 After many try of other things, it seems that Unreal doesn’t like that we put anim or montage directly in a Behavior Tree Task. When I launch it by the Task but through an event in the AI Character, it works well. Solved !