Hi everyone,
I’m trying to move my project from Unity to Unreal and having a dog of a time figuring it all out. Two of my FBX files crashed Unreal on import, but reexporting them from Blender fixed that. I still get messages about no smoothing groups exported for all of them, but I can worry about that later and reimport if need be. I just want to get a simple scene setup to see if I want to stay in Unreal or go back to Unity.

The problem I’m facing is that Unity is much nicer with regards to importing multi-mesh FBX files and working with the individual meshes. In Unity, if I import, say my door model which has the door and some things attached to it as well as the hinges and things that are unique to that door, everything is imported as a single prefab. In Unreal, I have to import them all as separate meshes. This is fine, albeit annoying. I just create a separate folder to hold those meshes, dragged them all into the scene and create a blueprint from them so I can use them as one object. Because the official docs for moving from Unity say that Blueprint classes are the equivalent of Unity prefabs. This is fine for some simple objects. But for something like my door, where there are a mixture of moveable meshes (the door and its window) and static meshes (the hinges and latch) I’m not sure I’m doing things correctly. When I set the door to moveable and the accessories to static and create a blueprint, everything is switched over to moveable. If I change the accessories to static, the blueprint itself becomes static, but the door remains moveable. If the blueprint is static, will the door still behave as though it is moveable? Trying to change the blueprint back to moveable crashed Unreal. It seems to do a lot of crashing.

This isn’t necessarily a problem for my door. If the hinges don’t get lightmapping data or whatever, it isn’t the end of the world. But for larger blueprints, it would be very nice to know that I can mix moveable and static objects in the same blueprint. If blueprints aren’t the best way to create one object out of several meshes like Unity does automatically, then what would be the best way to do that?

Actually you don’t have to do that in UE4. There’s an entire tutorial on youtube for creating a door in UE4. As far as importing several meshes goes, that’s just the way UE4 works. It’s been that way since UDK and UE3 (way before Unity). I guess the reasoning would be that Epic actually uses it’s products to create games like Gears of War so they have teams. UE4 is sort of like the ‘in-house’ tool that has been released to the public whereas I think Unity was created just for the public (I cannot for the life of me name a single AAA game made with Unity). But take a look at Gears of War and the best Unity game out there. There’s a huge difference in quality, and I mean HUGE. Using UE4 will make you a force to be reckoned with. You will eventually understand how games like Mass Effect are made (yep that’s UDK too). So with that in mind, your door can just be a block that rotates. The only reason you have to import your hinges as separate objects is because you made it that way. Not because you HAD to make it that way. It makes sense to have separate objects because of things like guns. Why attach a gun to an actor before you import it? What if you need a pickup and an inventory item as well? My game has 4 versions of each gun - one the character carries on his back, one he uses to shoot, one physics item he can drop and one pickup. But there’s only one object. If you did that as a pre-attached item you would need several iterations of that gun. It’s like the old saying ‘six of one. half-a-dozen of the other’.

I wish it would import the meshes like unity also, but it’s not too bad. Try unchecking “combine meshes” next time you have a mesh that has multiple objects within it. Then just add the child meshes in as components. 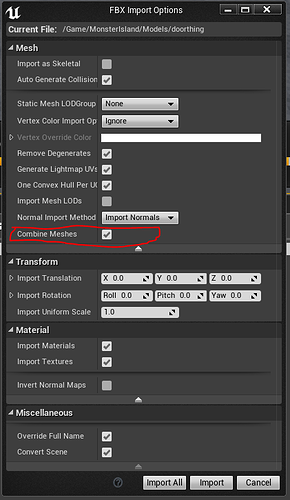