Moving FPS char to a specific position not working

Hello, guys. I’m working on a FPS char with no WASD moving control. Instead, I want to click somewhere and then the pawn will walk by itself to that location.

The problem is that I can’t figure out how to move the character. I’ve tried “Simple Move to Location” node with goal input defined by “Get Hit Result Under Cursor by Chanel” (Location output of Broken Hit Result), but the char won’t move. Then I’ve just used a “Set Actor Location” and it won’t work as well. I’ve also tried a preset location var on Goal and New Location just in case the Cursor wasn’t working, but no deal.

It looks like something is preventing me to change the character location in any way but “Add Movement Input” nodes… Any ideas? 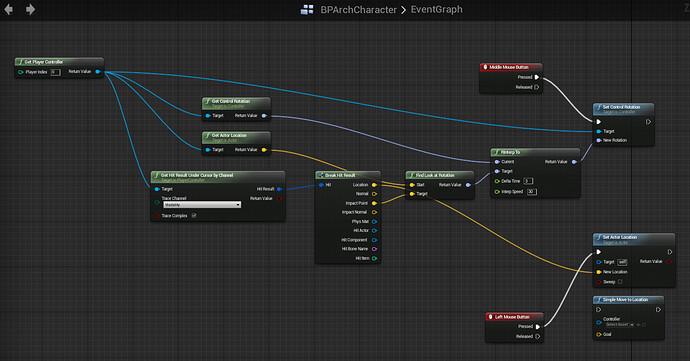 Do you have a navmesh in your level already? This is necessary for mouse click movement.

Yes, I have a navmesh, but it stil doesn’t work… Is the navmesh also necessary for “Set Actor Location” to work?

Can I see a screenshot of your blueprints? I may be able to see what is going on.

Sure. I’ve just attached it to the question.

try using an add movement input node, with the same vector information. Also, make sure that you are clicking areas that are affected by the navmesh, which you can see by pressing p while in a perspective viewport.

Yes, it moves a little in a strange way with “Add Movement Input” receiving this vector information. Well, at least it’s moving. But I need the “Simple Move to Location” effect, like if an AI assumed the player controller for a while to move it until it arrives the destination. Do I need to configure any kind of AI for it to work properly?

If an AI takes control of the player, you do need to set up some type of AI behavior. I would highly recommend looking at the tutorials on setting up AI behavior trees, which can be found here: