Moving folders and files rarely works and usually breaks a bunch of things.

if youre like me, sometimes you have a bunch of sandbox folders where you might create, modify change and add a million different materials and textures and meshes until you endup with the 10 finalized pieces you wanted from the start but now have 500 variations that you want to get rid of.

So I’ll have a “good” folder. I’ll move the contents to its final resting place in the main project folder and it moves ok, I’ll move it’s related textures and such as well.
Then I go to delete the seemingly empty folder and yet it seems to delete the ones I’d moved even though the folder im actually deleting is empty. On top of this, it sometimes says its deleting everything and I force delete and only some stuff is deleted. Sometimes the meshes lose their materials even though they were moved properly. Sometimes the folder wont delete after all the files did and every time you load the editor up theres like ghost files in there since it needs to load and unload them whenever you modify the “empty” old folder. I can delete it in an explorer window of the OS but that doesn’t resolve the missing texture links and the fact that the files DO physically move but the editor doesnt seem to know they have …some times, most times.

Then you cant undo these actions and you end up with corrputed assets and its generally more time efficient to start over from scratch than to try and fix each one.

You guys should fix this. It’s kind of a nightmare. I’ve tried the fix up redirectors option and that just makes things worse.
If you’re not sure about this since I explained it in a kind of “all over the place” way, it’s because thats how it feels. Grab a bunch of completed assets in a folder, say 50 or so and add them to your project. Then try moving like 15 of the assets to a different folder and deleting the original folder that housed them.

for me its working just fine, there are an issue with deleting assets, it load them and start compile while delete, so that might take a lot of time and after deleting it still compiling “unexisting shaders”

Yep- I’ve noticed this too- if you move something, the original folder stays with redirectors and deleting that empty folder feels like you are messing up the original assets- the only way I know things will be in the right place is to start over and correctly import things to the right folders. Also I find that when importing large amounts of textures or folders at once, it often imports some but not all of them, and you have to manually go through and replace the ones that it didn’t import correctly the first time. In short- if you have final assets that are game ready, and a solid directory for textures made out in the explorer- importing and organising works great. But if you are making multiple placeholder folders or you want to reorganise assets, it becomes a little bit harder to cleanly organise things. Best approach is to have a solid organisation structure worked out before you start working on things, and keep moving to a minimum.

if you move something, the original folder stays with redirectors and deleting that empty folder feels like you are messing up the original assets

Thats why you should use the “Fixup redirectors” command from the CB context menu.
Use it on the “Content” folder and you are good to go…

Even doing that doesn’t seem to change much- the folder with the redirectors still usually exists after a long wait- think hundreds of textures. It doesn’t seem to be a “clean”/fast way of moving assets. I haven’t tried with 4.8/4.9 so mabye it has been improved since then

I hit the same issue recently with adding assets to a project from the store and moving the folders and assets around in the UE4 content browser. I routinely cleanup the redirectors when moving content around in UE4 but was hitting issues with textures not connecting up after moving content, fixing up redirectors and then restarting.

I may have figured out what was causing the issue ( I’m still not sure if this is the 100% solution because it requires P4 or possibly any source control ) the solution is be sure to have project setup in P4 and submit newly added assets to the depot then rearranging things, fixup redirectors and delete old.

I normally always use P4 when using UE4 but in this case I was trying to shift content around without submitting the newly added content first and hit the issue.

same bugged behaviour after 2 years … moving assets will prolly bug out something … and no fixing redirectors doesnt solve things cos sometimes not only redirectors are problem … last time moving directory (in content browser not outside UE) duplicated asset and “fix redirectors” didnt even worked and gave error … its rly hell … how can one work with this ??? its rly pain to do anything with this bug … i dont undestand its still not fixed … rather than making new features someone should fix worst old bugs!!! 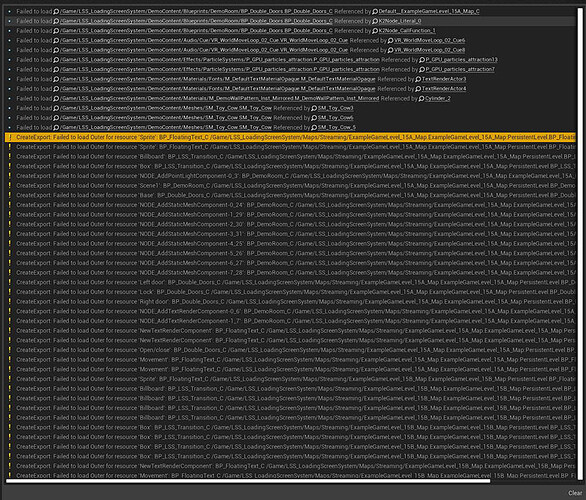