I would like to share with you with some footages from our movie projects, that we created at Illusion Ray Studio.
We focus on making short movies (around 10 minutes) for VR and traditional 3D (SBS). The movies are intended to be played in 3D cinemas (moving seats, blowing wind, splashing water etc.) and together it feels and looks amazing

Everything is rendered in Unreal Engine and the VR is working in Full HD constant 75 FPS. Of course with the 3D movie we need to use external software to stitch it together, add sound etc. and some really small tweaks.
Every project took us many months of hard work and most of it was 12-14h of work per day.The movies are intended for VR/SBS but we have a pipeline so we can easily convert them between VR, 3D and 360 so we create 3 different variations.
Anyway, here are some trailers, footages and descriptions. Note that every screenshot and poster were made in Unreal Engine.We added some texts in Photoshop but all the shots, colors, postprocess etc. were made in the engine.

This is a project for the VR. We made this last year and it took us few months of hard work. This is a ride through something like a Jurassic Park in a jeep. First it was created in UDK but after UE4 came out, we decided to switch it to the new engine and we made almost everything from scratch, except the dinos and animations. The movie is 7 minutes long. 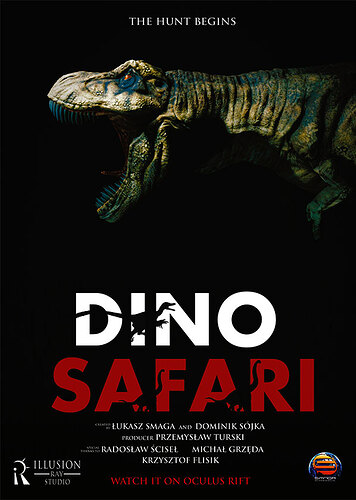 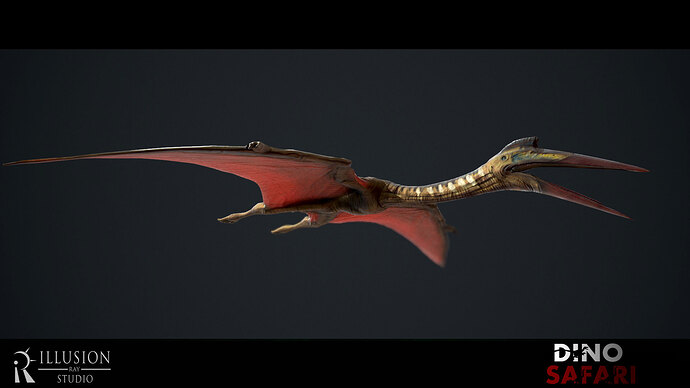 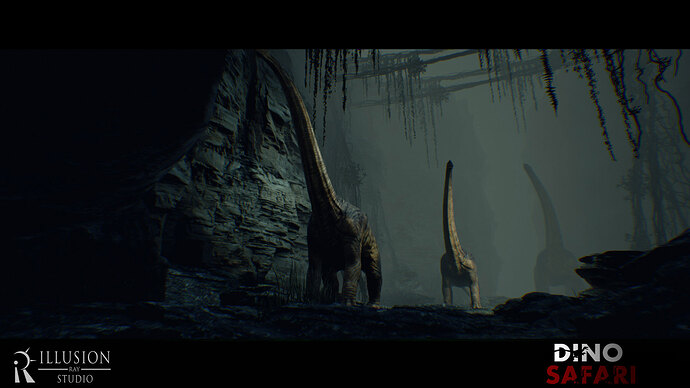 Another movie for the VR. As an police officer we need to investigate an abandoned mental hospital in the search for a fugitive hiding there.
This was a fun project but don’t be tricked that it was easy. It wasn`t

As in other our productions, we wanted to make some hollywood stylish movie but to maintain the real immersion with VR. We decided to let go the carts or other vehicles and most of the movie we are walking on foot. And no, we don’t have any issue (or other people) with the motion, so you don’t get sick.
But one thing I noticed that the immersion is better when you stand up rather than sitting. This should be pretty obvious, but the scale looks a little bit weird if you are sitting and your character is walking tall.
This is a 9 minutes long horror movie. 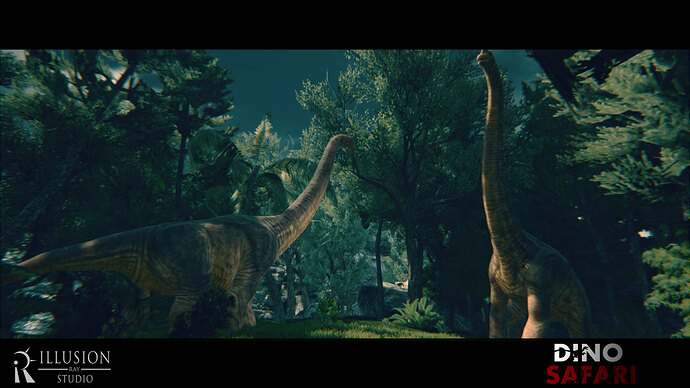 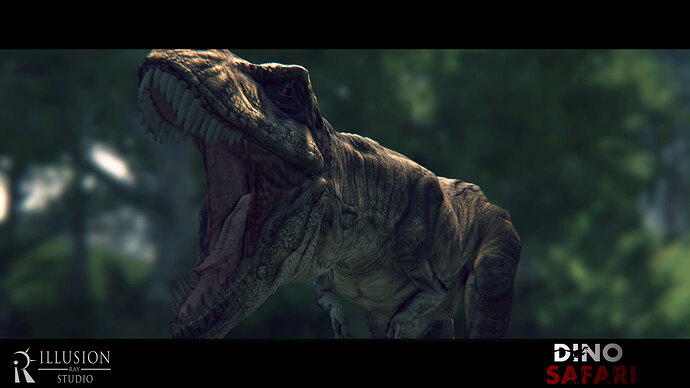 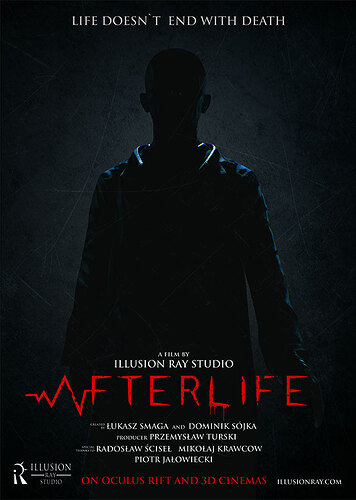 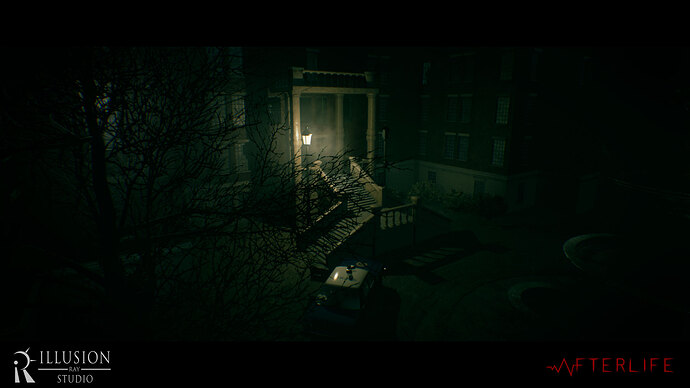 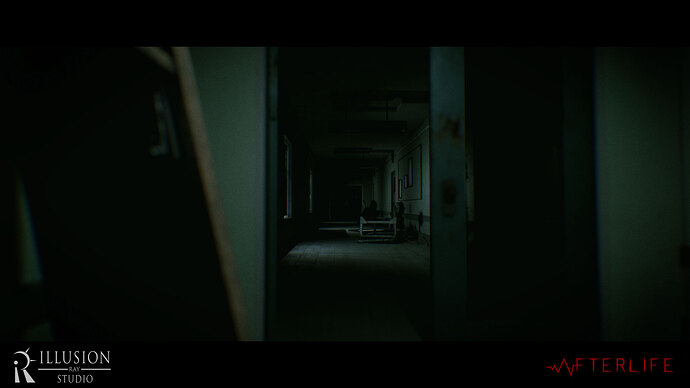 Motoride is a smaller project, designed mostly to use more of the effects in 3D cinemas. We are riding on a motocross bike over mountains, ruins and some other scenes. This is a rollercoaster-like ride. We ride fast, jump high and try not to get sick 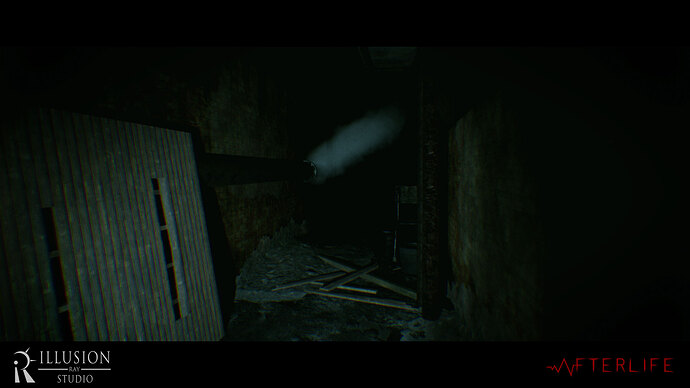 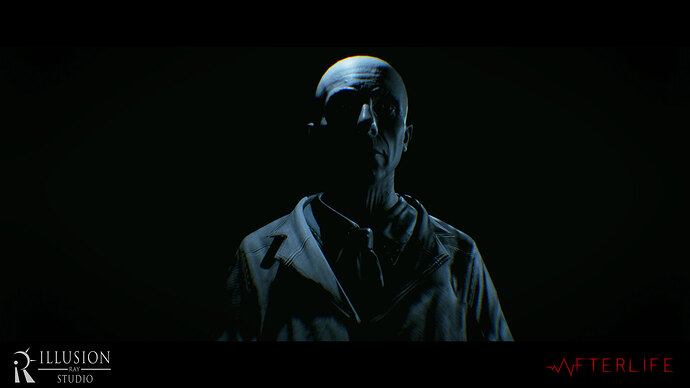 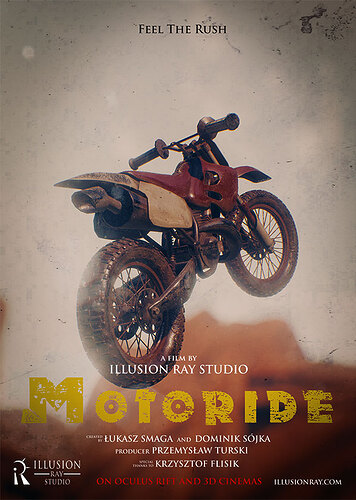 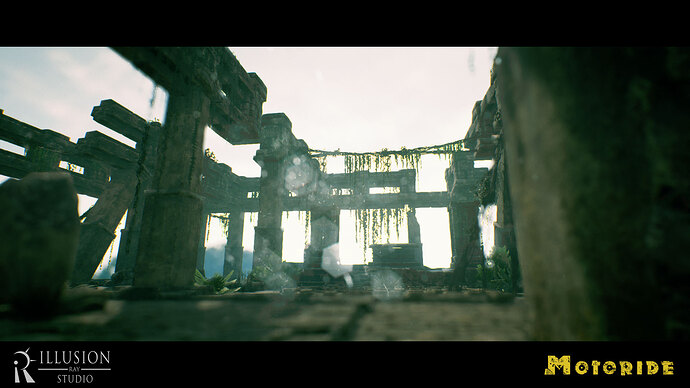 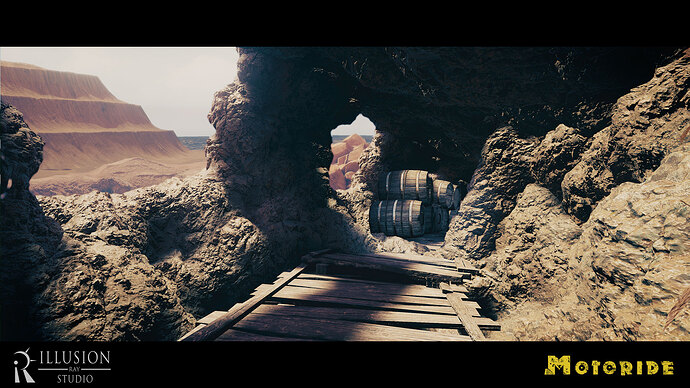 The most advanced project we made. This is a 12 minutes long movie made in 3D (side-by-side). We are riding in a cart through few cool caribbean environments. We have jungle, caves, underwater and pirates` ship.
It took us more than half a year of work. Some scene are so dense with animations, postprocess, models that on my machine with 16GB ram, GTX 970, i7 I had 2 FPS but we didn’t care much about it because it was rendered.
We wanted to have as beautiful graphic as we can get. 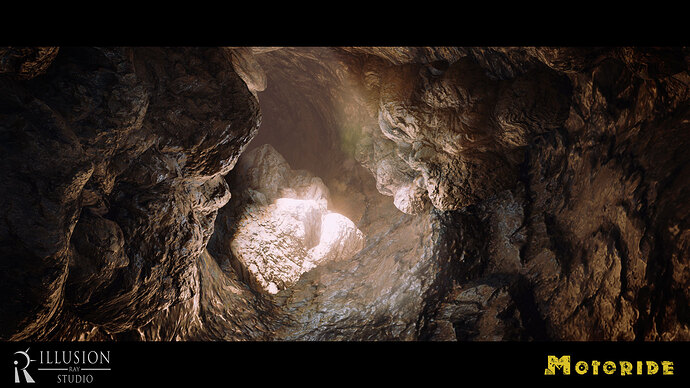 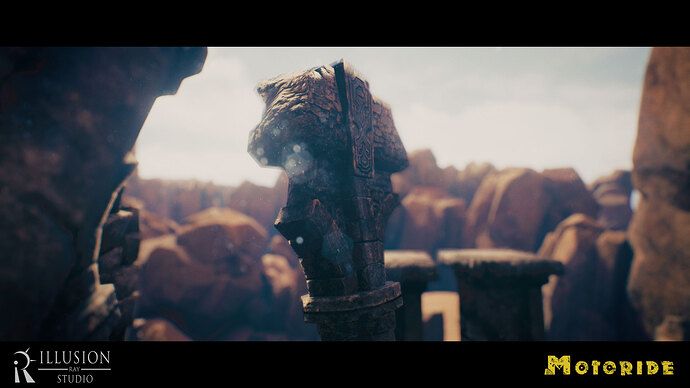 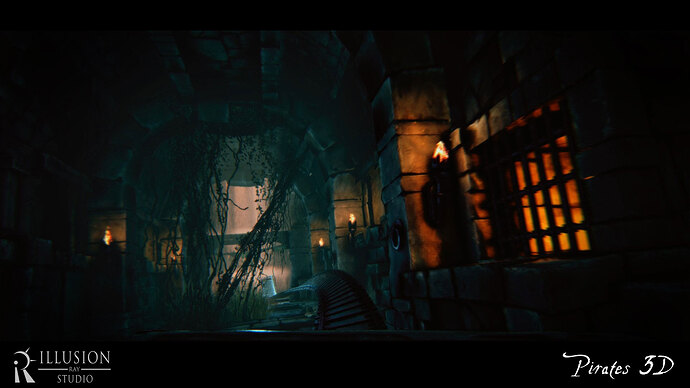 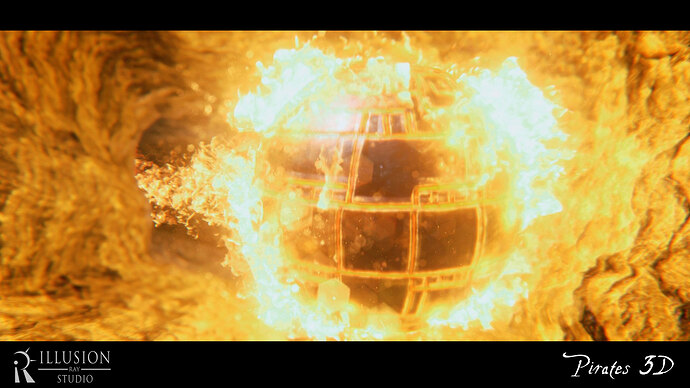 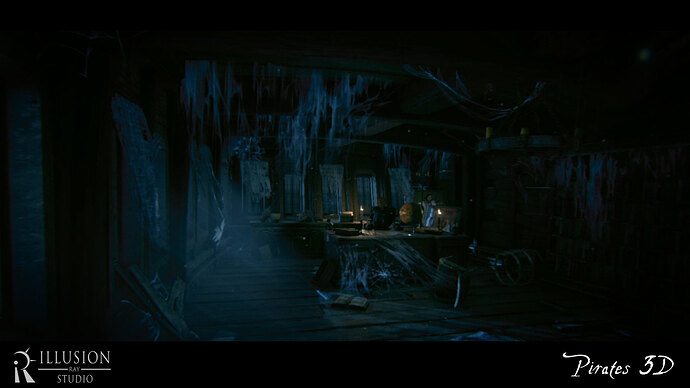 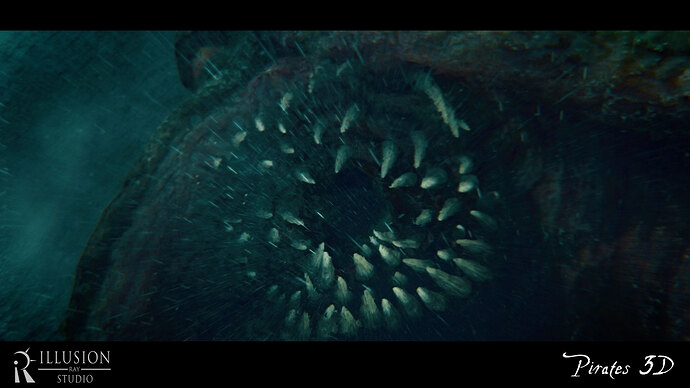 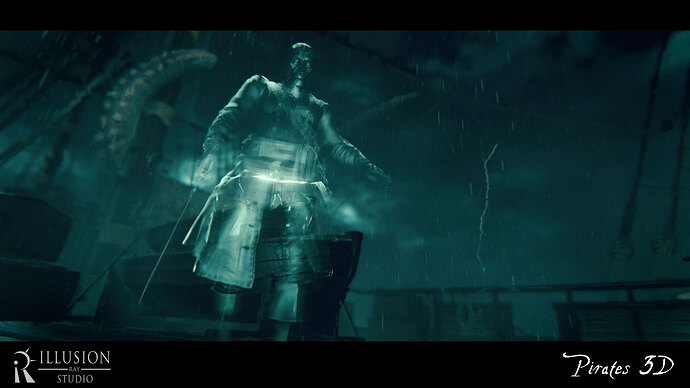 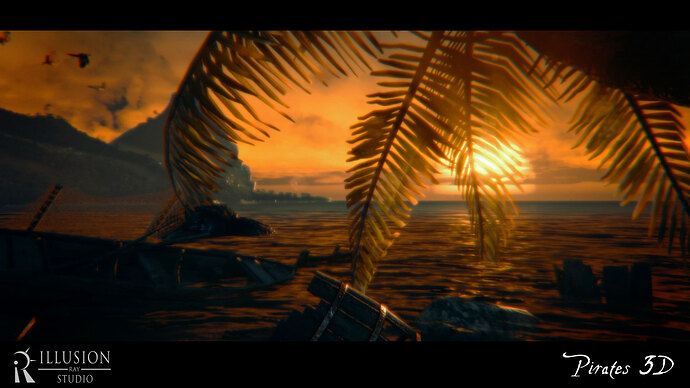 In every project, as we made progress we need to figure out many things to trick the engine or to make the Oculus work as we wanted. It is tricky to use Unreal Engine as a rendered, but we know that is has some great potential and is much faster than using Mental Ray or Vray. Of course they are more powerful, but while none of a big Hollywood company called us to make FX in their movies, we don’t need to use them and UE is getting better and better

The community is making really great job and we had a tons of help from them. Also the Marketplace helped us to reduce the time of making assets that would take us few more extra weeks to make them from scratch.
Unfortunately, we can’t show the whole movies, but maybe if there will be a lot of interest to see it, we can think about it. We didn’t make it for our own so we don’t decide about it.

Anyway, hope you like it and I am happy to read some comments or questions about it.

Here are some links where to find us. We also started a new FB page where you will find more informations about upcoming projects. Stay tuned! Illusion Ray has been founded in 2009, as an independent developer under the leadership of Lucas Smaga, a former creative mind of Platige Image. The studio, focused on creating immersive experience has constantly evolved and grew bigger.

It’s looks amazing. Where I can see these movies?

It’s looks amazing. Where I can see these movies?

anyway, if we will have a positive response from the community we can talk with our producers to showcase one of our project or maybe we can release a small portion of it.

We would like to thank Alexander and Chance for mentioning us at the community spotlight on Twitch! 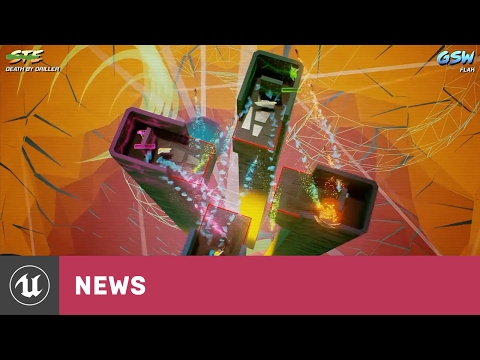 These look great, would love to see them.

Any tutorial submitted by the community, so we can try and work or stuff close to these awesome games/movies?