Hello. I’ve been trying to fix a problem with my custom movement component for my pawn.

My problem is that when the player slides off a 90 degree ledge, the slide adjustment from ComputeSlideVector and TwoWallAdjust seems to freeze and jitter before launching the pawn up in the air.

Here’s a gif I made to demonstrate: (Let it play once to play smoothly)

Keep in mind I’m not pressing jump here. I only pressed the key to move left once to start to slide off the edge.

The blue arrow/line on top of the player is set to point the direction of the impact normal every time the capsule collision calls the hit event. I will talk more about this later in the post.

My movement component right now is currently only setup to move the player based on it’s velocity. Calculating the velocity such as gravity, running, jumping, friction is done in Blueprints temporarily by setting the velocity every tick.
I have checked my blueprint code thoroughly, but nothing in the code would make my player jump suddenly. You can see the variables on the top right says CurrentWalkRun and CurrentJumpVelocity is 0 and the only thing moving the player is the gravity velocity which is at -1500 (multiplied by DeltaTime of course). The same thing also happens with no friction applied, so that’s not the problem either,

My current C++ code for sliding the player looks like this:

PreformMove is called every tick.

ComputeMoveDelta is currently a modified function I ripped from ProjectileMovementComponent.cpp, which returns the Pawn’s current velocity (which I set in Blueprints) and adds acceleration, which right now is a function returning an empty FVector.

I tried enabling “Trace Complex On Move” in the Capsule Collision, which at first strangely seemed to fix it: 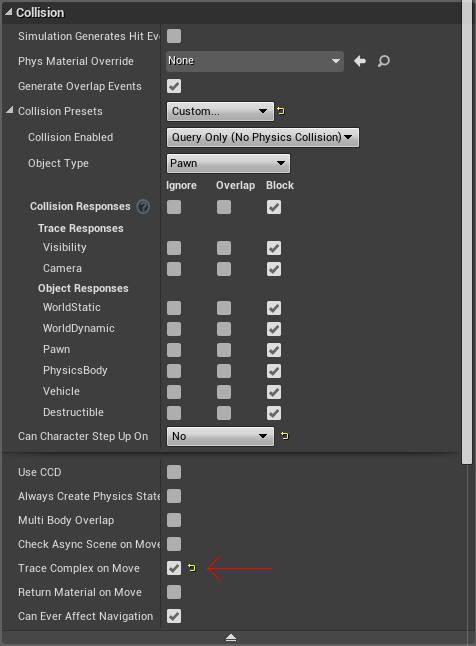 But after testing on other cases, it seems to freeze and unfreeze the player rapidly, slowing down the slide, but does not launch the player in the air.

The blue arrow now moves smoothly from one surface to the other instead of instantly snapping 90 degrees like it would sometimes do without complex collision, which I find odd since the triangular mesh and the collision models are 1:1 on the walls.

I also don’t want to use complex collision due to the way I set up stairs which is by having them act like a ramp collision wise, but look like stairs visually:

Now, do you guys have any idea what the problem here could be? Could it be the fact that I set the velocity in Blueprints instead of in C++? Personally I think the main cause for these issues is ComputeSlideVector and TwoWallAdjust. The movement works perfectly fine in all cases except 90 degree ledges. I do not know if it’s because I’m using these functions wrong or of there is something wrong with the way they calculate the sliding angle to adjust the velocity. I looked inside them and saw that they use the crossproduct for 90 degree collisions and bellow, and use dot product for any cases above that. I do not know enough about trigonometry to be able to create my own functions to handle this. But I think Epic’s functions should work correctly here since I guess they would have fixed something like this if they had the same issues and that I’m just using the functions incorrectly or something.

Any help would be much appreciated!

Okay so I ended up removing both my “answers” since they still do not work. I will post an update if I manage to fix it. For now, the problem is still the same:/

Okay I managed to fix it. The problem was this line of code:

The cause for the problem was that NewLocation could be moved by ResolvePenetrationImpl which could cause the velocity to drastically change direction, which it did for me in form of the sudden jump when sliding against the ledge.

Reading through the FloatingPawnMovement.cpp I saw that they had implemented a way to remove this problem by not updating velocity if the collision was position corrected by ResolvePenetrationImpl.

bPositionCorrected is decided by calling this function:

So by not updating the velocity when penetration fixups are happening, the random bounce is removed and the player slides normally down the ledge.

Thanks so much for this! Was running into the exact same issue and this helped.