Hi all, so I’m a noob…I’ve created a new tranq arrow, finally managed to figure out my mistakes along the way, but I want to add a movement speed de-buff for the targeted dino.

For the life of me, I cannot find any modifier that actually slows down a dino, once they have been hit by the arrow.

Any help would be gratefully received…CHEERS!

On the buff find this:

I don’t know if he’s even at the point of having applied a/the buff yet.

This appears to be a first - or early - foray into modding. Keep it simple. This can be done in the Damage Type for the projectile.

Then just find the already used damage type(click the magnifying glass icon to jump to a file in the content browser - if it exists), copy it into your mod folder, change the values you need then replace the one being pointed to in your arrow blueprint: 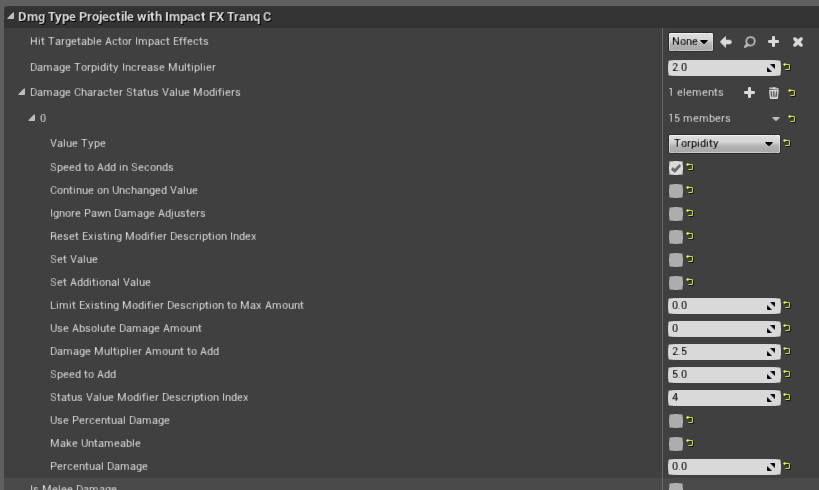 hey thanks for the replies, yeah it is my first mod, I managed to apply the speed de-buff doing woeful’s solution, just a one more question.

I created this mod because there was a real lack of balanced modified arrows, all the ones I have seen either have insane amounts of torpor, or have 100% hunger buff…so on and so on. I set my projectile to do 700 torpor per hit, all works lovely in the test map, as soon as I use it on my server or single player, I get variances from 600-1800 torpor per hit…is this a server issue? as I do use my dedicated server .ini files during single player to replicate what will happen once I commit it to the server, or as I believe more likely, as this is my first foray into modding, I have done or not done something I should’ve…sorry for the wall of text, just keen to get a working mod that behaves the way I would like.

ok I have managed to replicate the variances in the test map and get rid of them, it was caused by my continued efforts to set a variable torpor amount in the gameusersettings.ini, using the event graph, but on the test map all is 700 torpor at all effective distances, on single and server play is 1200??? I cannot fathom where a 500 increase in torpor has come from when in the test map it is 700…I have used a graph layout from the tutorials here, but the “set” variables, I don’t understand how and what I should set them to, could anyone point me towards a video?? as seeing is easier to understand

With a “Set” variable it will “set” whatever value is in the box or connected to the pin.

This video explains it quite well