I decided to edit this post to make it smaller

When I assign W key input to be used in a level blueprint (3rd person template), it stops working as the default movement key for forward direction.

Is there a way to have the W key do both? (continue to work as the forward key AND follow my BP below?_

Thanks for replying. Not sure what you mean though. W works correctly according to my BP but when it does, the movement no longer works. When I remove the W key from the BP, movement returns. Does that make sense?
Btw, I have E assigned to another action.
I’m puzzled. 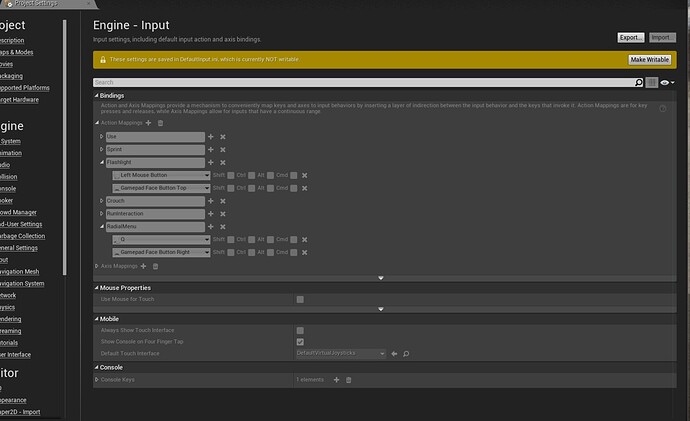 You can assign input actions to the same key as well.

IE in that screencap “RunInteraction” and “Use” both use the E key one for testing purposes.

As I said assign the key as an input action in your project settings - inputs (check the screencap above!)

Thanks, I’ll try that.

Ahh! That makes sense, using input actions instead of the actual W event. I’ll try it and let you know tomorrow how it goes. Thanks again.

Ok - so I changed the W key for 2 input actions and assigned W to them in Project Settings->Input. Unchecked consume input and all is dandy! Thanks for your help. This is resolved.