So I think before we can help we need to see your blueprints for Input and switching between view types. I would recommend that when you want to switch view types you should change the camera boom length and offset to adjust to where you want it. There is a thread very similar to this [here][1]. I’ll also attach an image from Everynone. 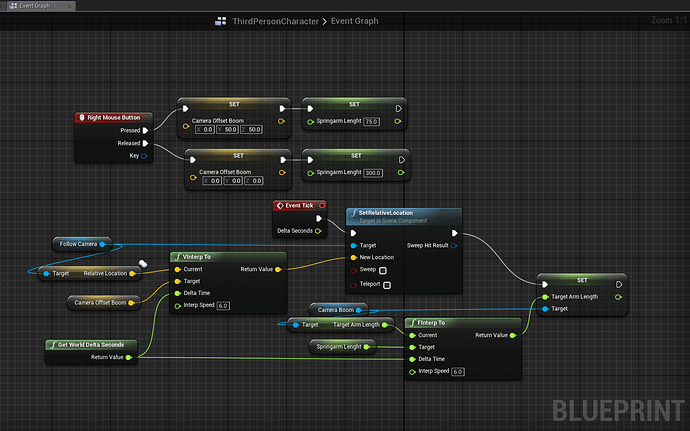 Hi,
I’m currently trying to create a system to switch between a classic third person camera mode and an over-the-shoulder camera mode (some kind of splinter cell style in which moving the camera moves the actor so you can aim wherever you want) but when I test it and move right, the skeletal mesh shifts right, same thing when I move left, and it switches between right and left when I move backward. I kept the “Movement input” stuff of the thirdPersonCharacter and I suspect it to cause the problem but I don’t know how to keep it and removing the shifting glitch. 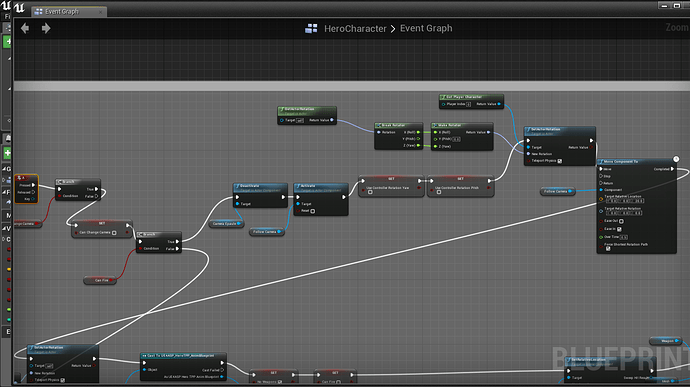 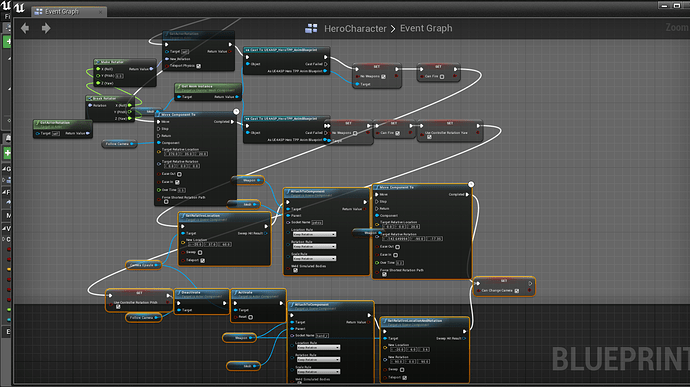 Yes, sorry for the wait, the blueprints are here (probably a giant mess though, I’m new to all of this).

The issue might actually be in the animations, so no need to get into my crappy blueprints for now I guess…

Also watch out for the optical illusion where If your camera is swinging left it can make your character look like he is sliding right, if there is rotational camera lag

Good idea but I checked and it seems that it really is the mesh which is swinging, and strange thing, I attached the camera to the mesh (with no camera boom) and it still does it, so I don’t know where to search. Plus, I tried to put an animation asset to see if the blendspace or the animation blueprint was going crazy but it didn’t fix it.

is the mesh’s root bone or pivot point centered where it should be when you open it in the asset editor?

By swinging do you mean it is moving to the side or rotating? Check whether it is simulating physics or not that can cause some problems as well.

It’s some kind of teleportation of the entire mesh right and left of the camera, and it probably covers one or two meters. It happens when I use the movement input to go right, left and backward so it might be the physics of the skeletal mesh which causes it to teleport in the direction where the character is moving. I don’t know if I’m right but it could be the camera ordering to the mesh to face it’s direction while the entire character is moving in another one, so some kind of overlapping orders ? I guess I should check this.

Well in the end I just made a new skeletal mesh so I could attach it to the over-the-shoulder camera (yeah, just like the firstPersonCharacter class), and the glitch is gone. Anyway, thanks a lot for your help, it was really useful.