Move To Node with Time Limit causing AI to twitch

I have this BT, and the node Move To is causing some problems. 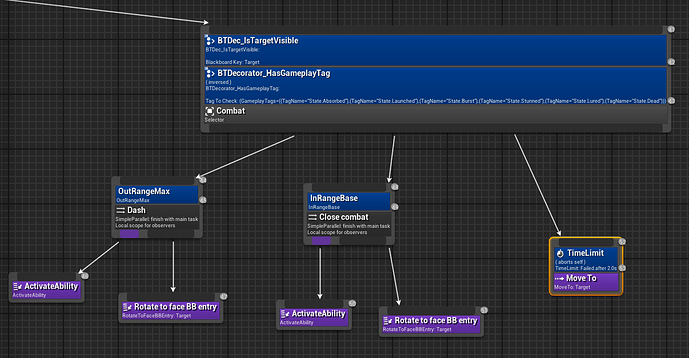 When the node aborts and the tree is recalculating what it will do next, if it is going to continue moving, the AI for a brief moment returns to the idle animation, and makes the character look like its twiching.
I tried saving the last velocity so the Animation Blueprint doesn’t return to idle animation, but it keeps twiching, just a little less obvious.
I also tried making the nodes that precede abort the ones with lower priority but they don’t abort the move to.

I’m just trying to not get the AI be stuck in the Move To node until it succes, anyone knows a workaround?

I think what you probably want to do is use a service to update the target location regularly, rather than relying on an abort and re-move. You want to stay in the moving state (or issue a new moveto without first aborting the previous one).

I already use a service for the Target location.

How I can recalculate the tree without exiting the current node?

You don’t – you want to set decorators to the left of your MoveTo to Abort Lower Priority, then whenever something else more interesting than moving happens, the Move will be aborted. Otherwise, stay in the move until complete.

I already tried that, but for some reason the default Move To node in Unreal doesn’t abort.

I managed to fix it creating a custom node for the move to, with the events for the abort.

not sure why that would be the case. I also use some custom MoveTo nodes, so I’m not sure what the difference might be (it might be possible that the default MoveTo actually doesn’t allow the abort to succeed… I have used a little trick like ignoring an abort request in a task, so that i can be 100% sure that my task actually completes …)