yet the “move to folder” bug is still there… why is it not fixed yet ?

I constantly have to go to windows explorer, move the leftovers (unreal copy the files,does not move them)

then after a while, unreal still keeps old references and I have to retarget some assets to their new location

any chance UE4 devs will fix that one day ?

I’ve never experienced this. UE moves files, but may well leave a redirector behind. You can enable redirector listing in the content browser, and fix them if you want.

I even cannot remove folders
so I moved all my folders to a todelete folder outside of unreal
and then I retarget things when it points to the old folder
but 4.27 still duplicates folders instead of removing it

maybe I should recreate my project from scratch

It sounds a bit like you’re fighting the reference viewer there. If anything is connected in any way, the engine won’t let it be removed.

they appear empty, but as I look their content in win explorer, all the files are still there

I also noticed that as I remove a file in another folder(unrelated) suddenly unreal complain an asset is missing (a ghost link to a previously moved asset, still pointing to it’s original position)

I noticed this problem likely only happen to older ue version project file, like ue template or starter content.

However, this also happen on new ue version project, but likely only on blueprint.
I noticed, when I moved a file referenced by a blueprint, the blueprint file will require compile but not marked as changed.

What you need to do is:

To resave and recompile, you need to make a small changes to the file, which could take a while and difficulty to do on large project.

An alternative way to do it is call Modify() function and set blueprint Status to BS_Dirty.
I think, this can be only done by C++, but you can create it as blueprint function and use Blutility to call the function.
Here is my code.

After the blueprint is marked as dirty, you can play the game to force them to compile then save.
I have been doing this for a while, so far so good, no more broken reference.

Btw, you need to recompile and resave the file you moved and files referenced to it.
For example: 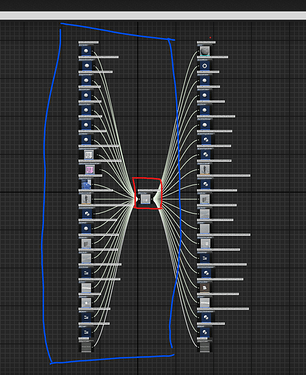 I noticed another thing once I deleted/moved an asset
unreal creates a 2k file with the same name, keeping me from recreating the same asset

is it related to that bug ?

I don’t get what do you mean by 2k file, do you mean redirector?
If yes, right click on the root folder (root Content folder), and choose Fix up redirectors.

I don’t know, why would the engine need redirtectors instead of just fixing refrerences

why should I have to click “fix redirectors” at all

Because there can be a lot of assets pointing at each other. Leaving a redirector is instant, fixing up can take several minutes, depending on complexity.

UE5.1 when moving files their references not updated Bug:

When moving materials to different folders they don’t update their reference to textures, after reopening the project they become grey checkers, even the redirectors are not created.

However if they’re not yet saved / with * symbol to their names, they can be moved with their file references updated only once. After they’re moved or renamed once, they’ll be automatically saved and won’t be able to update their references if moved again later.

Have to avoid moving assets to different folders in the project after they’re saved, move them to final locations before saving new assets.

Suggestion: It seems that if make changes to each moved file, then save them again they’ll update some of the references, but this is tedious for lots of files. Can we add an option to force update the file references after they’re moved or renamed?