Hello, I have my character moving with WASD keys, and also LineTracing beneath cursor to face character towards mouse. Now I’d like my character to ALWAYS face cursor, but also move independently, so if I’m facing forward and hit ‘A’ key I want it to go left, no matter which world direction the character is currently facing. There is something to do with Vectors I just can’t figure out what. Can you please help?

So with the new Enhanced Input I have seperately W, A, S, D (left, right, up, backwards) and instead of plugging ‘Action’, I plug in ForwardVector, which works for forward and backwards, (since backwards is just ForwardVector negated) but doesn’t work for sideways movement. Basically I want my char to strafe left and right whilst facing the cursor. Just please show me a blueprint of either left or right movement.

I have this in place for LineTracing mouse :

And this to move forward (backwards is the same just negated) : 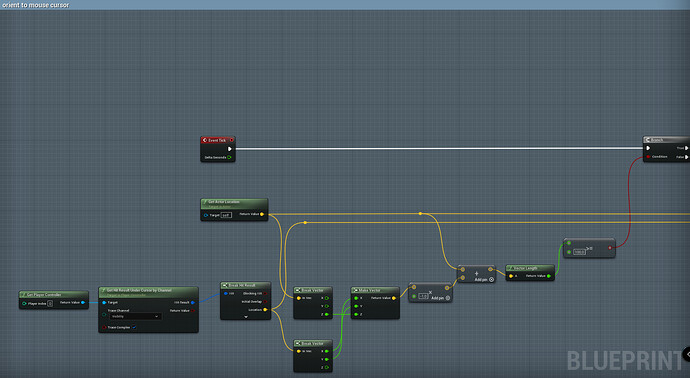 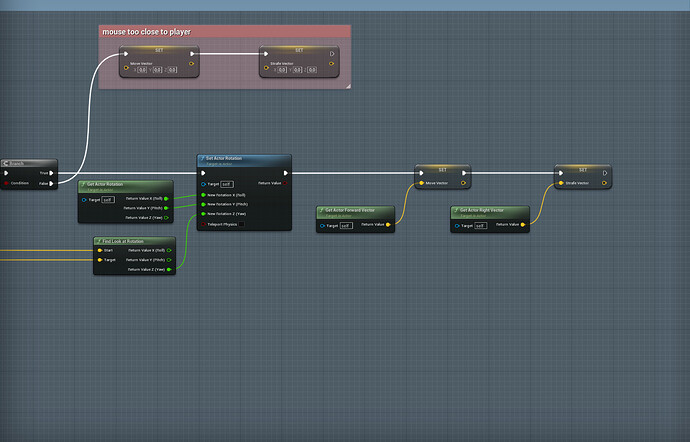 and here the input

hope this helps you

p.s. had no strafing animation

This is exactly what I need.

Could you just post a picture of your enhanced input? I mean the context?

The character moves ok forward and backward, but goes into circle when strafing.

Also here where you have vector multiplied by -1, I just have negate vector, thats the same right? Because I can’t get to multiply by float.

And it also appears that in one direction he strafes correct, the other he goes circular towards cursor.

hi,
sure i will make you the screenshots in an hour or so then i should be back at my seat

the input is straight from the third person template

p.s. the character will strafe around the cursor position in a circle, if you dont want that there are some changes needed, because as soon as you strafe and the player should always face the mouse cursor it has to go in circles

i think you can leave that -1 multiplier for the vector

i will revisit it very soon, later

The idea is like those isometric shooters you know, that spawn millions of mobs.
Then you can aim any way you like but you still strafe in a straight manner, not around the cursor. Though as your video shows, doesn’t it run straight up and down? I need the same action sideways.

one second i have something for you

Did you forget to post or are you having trouble too?

will be up in a few minutes

That is what i want 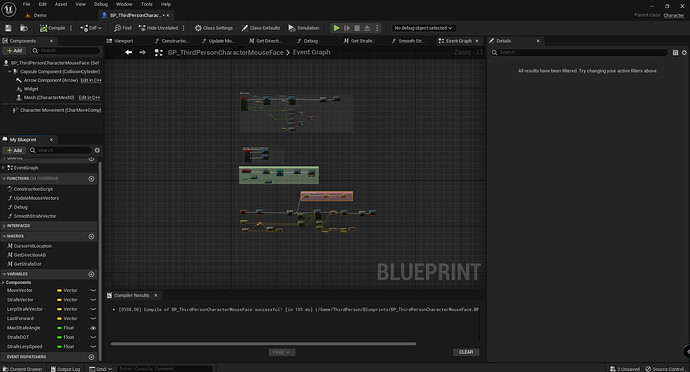 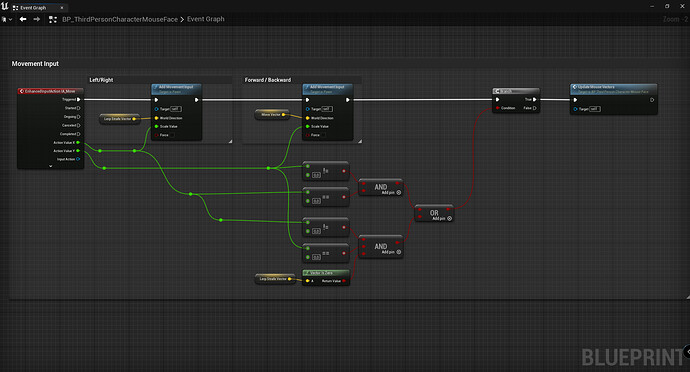 this will be the for the initialization 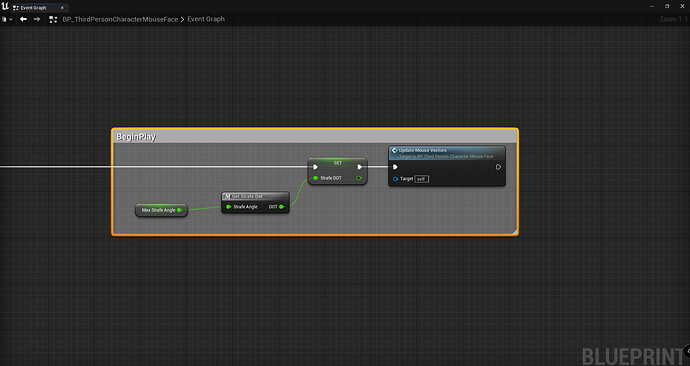 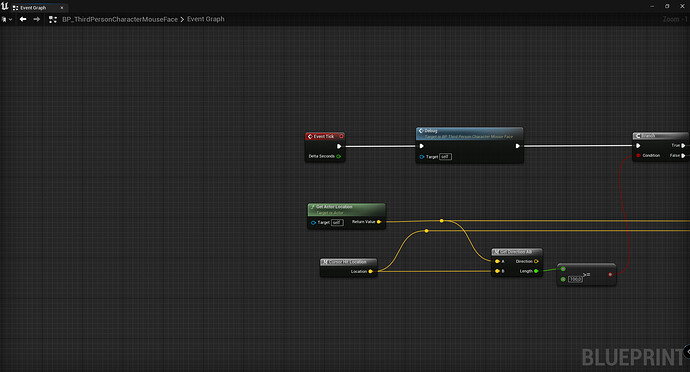 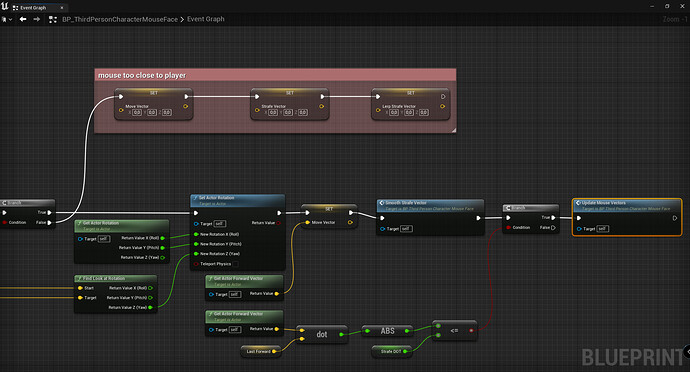 StrafeLerpSpeed → defines how fast it will snap (5 in demo video; forgot to make it public)

here are all functions 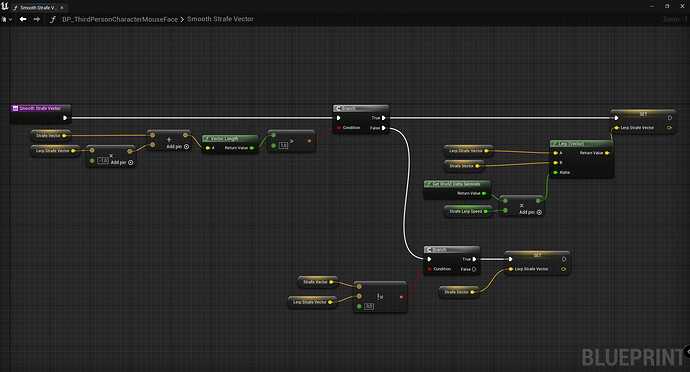 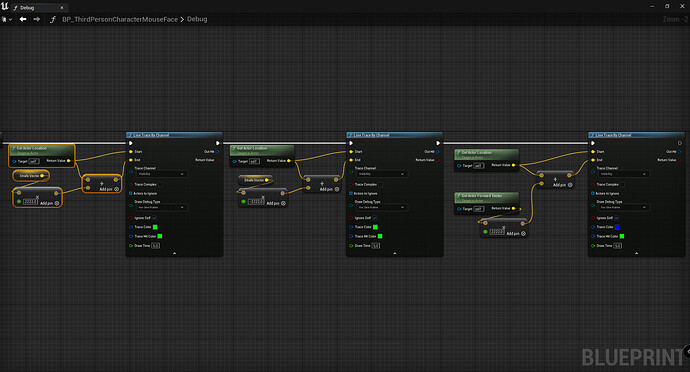 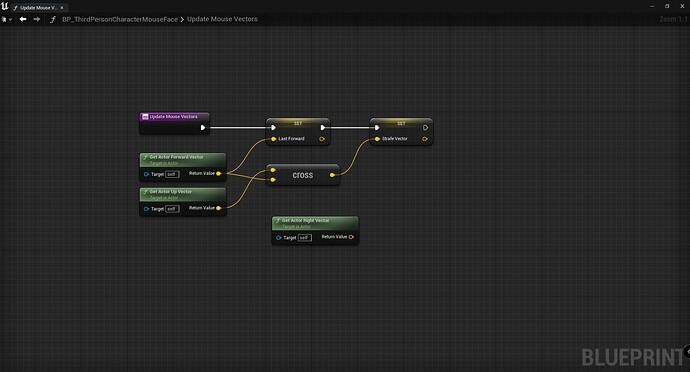 and here are all macros 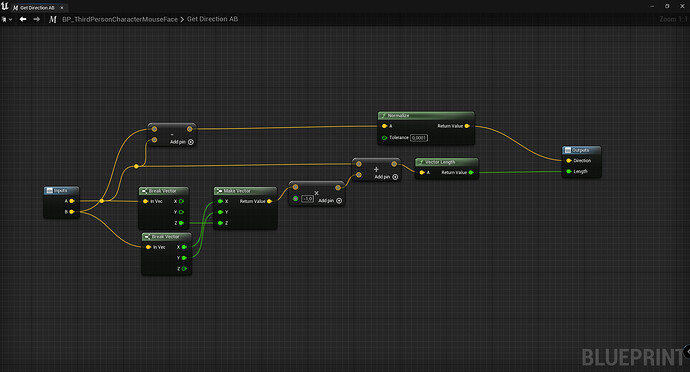 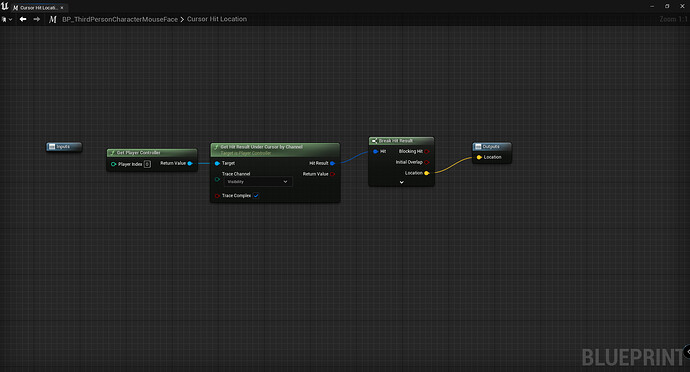 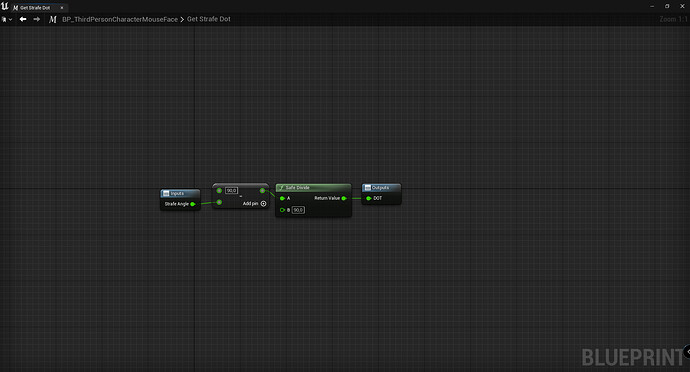 and this should be the result

if something is missing please let me know

i hope this helps you

here is the uasset file of the bp… input needs to be setup or changed
BP_ThirdPersonCharacterMouseFace.rar (54.0 KB)

For now, W and D keys work the same as S and A…
Also debug lines are not drawing. I guess I missed something trying to find out what.

did you plug in the beginplay part, i missed that one in first post

maybe these need to be set
disable yaw rotation

i will make a new bp later with only that code in it… atm it depends on input my widget, interface for other usage

Hey that would be cool

Yes I Tried the BeginPlay…

Not even Debug is being drawn. Zip file would be great

Though, SmoothStrafeVector isn’t being called anywhere. As far as I can see.

its in the smooth strafe vector function

Thanks for the effort man. Much appreciated