I think you are looking for the SetViewTargetWithBlend node: 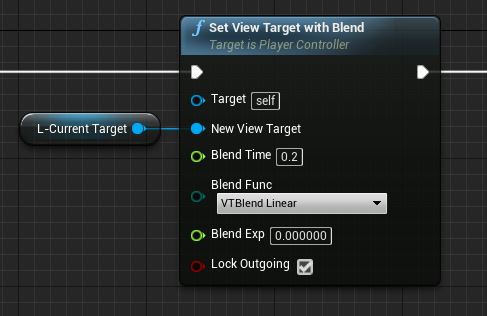 You just have to pass an actor to this node, and the camera will smoothly switch to your new actor. You can specify a blend time, and even a blend function if you want to.
If the result isn’t what you want, I suggest you to add a camera to your level, and to set this camera as target. You can even animate the new camera.
You’ll have to call this node again, so that your camera will come back to your character (by passing your character as argument, of course).
Hope it helped!

If this is a feature in your level and not in your actor, yes, putting it in the level blueprint is a good idea

Personally, I almost never use the blueprint level, but if you have a trigger in your map, you have 2 choices: put it in the level blueprint, or create a specific class for your trigger and manage its behaviour in its blueprint.
About the black bars, I’m not sure but it could be due to your post process (the default post process has this kind of behaviour, if this is what I think)

Not sure if I understood your question, but I’ll try my best.
You want multiple targets for your SetViewTargetWithBlend? Does that mean you have several triggers on your level?
Anyway, if you have multiple targets, you have to choose manually I guess. You can set a “tag” to each object to differentiate them, or simply drag&drop them in your level blueprint to have a specific reference to each.

I’m trying to use Move Component To to move the camera(that’s attached to the player) to an object. I’ve tried getting the location and rotation of the object, but it moves depending on where the camera is facing.
The way it works is when I enter a collision and press E the camera will look at the object.

Do you want the Camera to move, or just look at the object?

Sorry for the really late reply. The camera would need to move and rotate. The character will be directly in front of the object, however, he can be facing any direction and activate the command which means the camera would move incorrectly.

Also I’m doing this in the Level Blueprint is that the correct way of doing it?

Thanks again for the help. One last question if you don’t mind.

If I want multiple objects (which means multiple cameras attached to each). Can I just duplicate it. Currently I want the player to be in the trigger and need to press a button. Does the OnActorBeginOverlap automatically figure out what object to use? The camera that’s attached to the setviewtargetblend is a variable.

Sorry let me explain further. I have an object with a camera and trigger attached. I want to duplicate that object so when I enter its trigger the camera switches to that objects camera.

You can duplicate it and see, but I don’t know if it’ll work, it depends on how you made it.
If it doesn’t work, you’ll have to assign the right camera. Remember: you can drag&drop an object from your level into your level blueprint, to have a reference to it.

The problem is that when I add a camera as a child(in the blueprint) it’s not an actor so I can’t use the events I want to, but when I make it an actor it won’t automatically select the camera. I tried duplicating but it doesn’t work.

NEVERMIND it works. I made a stupid mistake my apologies. Thank you so much!. All I did was move the code from level blueprint to the object.