I’m having an issue trying to make a “Guard” style AI. Now when I begin play I “Get Actor Location” to set my “Location Vector Variable”, I thought this was supposed to save the location where you initially place the AI. But when I try to move ai to the location saved in the variable, it does nothing. The print string shows the coordinates fine, but the AI doesn’t want to move. I’ve been testing a basic “Seek Player” function which works fine, but when i go out of range and it should go back to its original position it doesn’t. I’ve attached a screen shot of my BP. 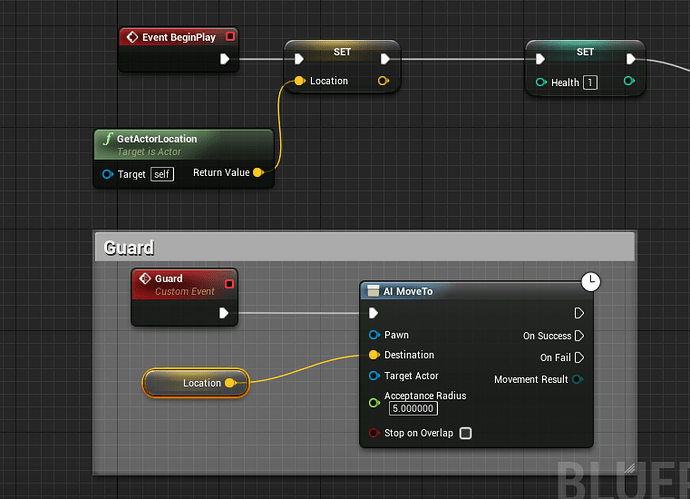 Put a 'self ’ node into your Pawn input

they are also trying to move to the location that they are already in, they dont show when the event is called, and theres no indication of this out of range that they mention.

also this is a really old post so i dont expect there will be any answer.

Do you have a nav mesh in you level that covers the whole level?
If not, you can find it in the “Modes” section

i found a workaround for this, mine wasn’t working but when i added the bottom left section it worked.

when the actor spawns it might be above the nav, so when you try to go back it cant because the position is out of reach.
by taking the current height and giving it a radius big enough it will find a point it can move to, then split vector and splice it into the original location in the z axis.