I have been trying to get 8 players local multiplayer working using xbox one wireless/wired controllers and so far, not succeeding.

Maximum number of local players on one PC, can you have more than 4?

I am wanting to create a local play game for the PC and want more than 4 players. Is 4 the maximum number for local play or can I create more. I am not using split screen.

I have also tried a solution below on that same answerhub page, suggested by eXi and shadowriver, which was to create a C++ class that derived from GameViewportClient and within the constructor, set the MaxSplitscreenPlayers to whatever I want (8 in my case).
This solution did not work.
I went to this forum thread below to go more in depth, but this did nothing either, and nobody provided any proof of it working, which means i’m unsure if it’s something wrong on my end, or something wrong with the engine.
https://forums.unrealengine.com/community/community-content-tools-and-tutorials/104661-split-screen-with-over-4-players

Has anybody gotten more than 4 players to work on the same screen, with shared camera or split screen? If so, what steps did you take?

I think that having 8 players, or even 6 players in a local multiplayer game is a big feature that people definitely appreciate in party games. So I am determined to get it working.

Thank you in advance, any help or suggestions will be greatly appreciated

So I found that all controllers are being created as expected, so I create a custom PlayerController blueprint that overrides the A button to output a message to see if any of the controllers work.
As expected, only the 4 that are controlling pawns actually work.

Another discovery was that when I turn on “Skip assigning gamepad to player 1”, I can control 5 pawns, the first can only be controlled via keyboard as expected…but no more than 5 can be controlled. Also if I turn split screen on, the keyboard player doesn’t get his own section of the screen.

I am trying to figure out what c++ class handles physical gamepad controllers…I figure it’s the PlayerController class, but I’m probably wrong.

In Engine\Source\Runtime\ApplicationCore\Private\Windows\XInputInterface.h is this line:

Try changing that to 8.

Hi GBX_botman, I tried to change this earlier today to no avail. Have you had success in changing that line?

There was also a XInput.h found in the engine’s external dependencies, which has the following line:

The Xinput.h file cannot be altered, at least not without saving a copy of the header somewhere else, then finding all references to it in the source code, and replacing the references with the new copy somehow.

Just to make sure - any changes to engine source requires you to rebuild the engine.

XInput supports a maximum of 4 controllers at a time (Xbox’s could only support four, and it’s carried over to the Windows version).

Microsoft has not made any major changes to DirectInput since DirectX 8, and introduced XInput later in DirectX 9: there remains some confusion about the current status and future of the two APIs. The XInput API also as of 2010[update] has limits that DirectInput does not: 1.XInput supports only "next generation" controllers. This limits it basically to controllers for the Xbox 360 that also have Windows drivers. Legacy Windows controllers, joysticks and generalized haptic feedback devices ar...

Thankyou so much for your answer TheJamsh, that gives me a lot more clarity on the situation, and saves me from wasting even more time trying to get more than 4 players with just the default engine.
I remember reading about it briefly, and seeing plugins, and remembered that Gang Beasts needed Xinput to be disabled or something in it’s options in order for it to support 8 players. (I know it’s a unity engine game, but the same principle applies).

Does UE4 have any directInput support? Or must I use plugins such as: 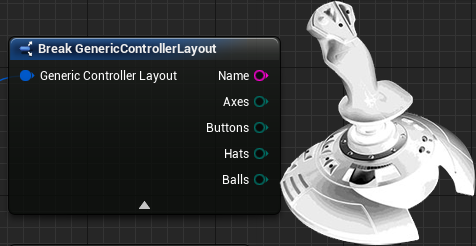 Perhaps I’ll have to look into implementing directInput at a later date, as I don’t think my skill level in programming would be suitable to writing my own DirectInput implementation unless there is some thorough documentation somewhere to make the implementation easier.

Once again, thank you TheJamsh

You’ve saved me a lot of time, and it is greatly appreciated.

No worries. I’m not sure on the solution to be honest, I did have a very hacky wrapper for controllers sometime ago but I’ve since lost it.

Controlysis might be overkill for what you want but in all honesty I’m not sure as I haven’t used it. You can write custom input wrappers though to pass input to UE4. Have a look at IInputDevice, there are a few classes that use that as a starting point!

Could not imagine 8 players on 1 screen. Players view would be so tiny. <Almost makes it not worth trying it.