I have a blueprint that spawn actors based on MIDI input and also has a Modular Synth component that plays the corresponding notes.
However, every time I open the project, all of the MIDI and the Modular Synth nodes have broken and are invalid until I Reload the assets from the browser. 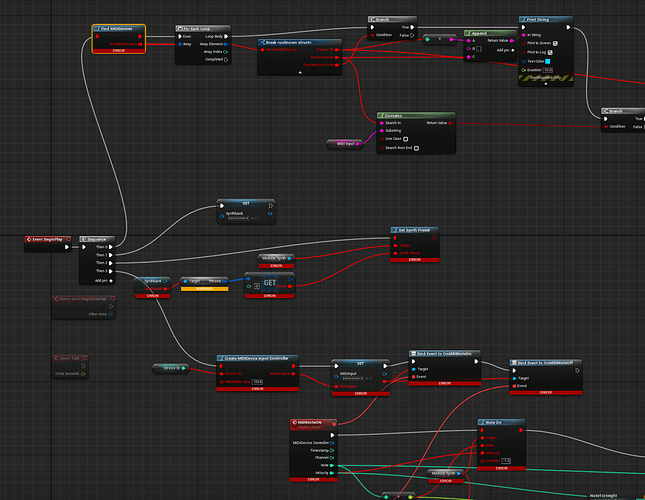 Hi, I have a similar problem with an engine blueprint (BP_SunPosition). Could you solve the problem? How?

I think I found the issue. Going to leave it here for future reference or comment by the Epic team in case I’m doing something terribly dangerous. In the plugin script in C++, there is a setting for the Synthesis Plugin that determines the “LoadingPhase” of the plugin. I believe this determines when in the order of events the plugin code is loaded. It was originally set to “Default” but I think the problem with this is that my game actor code had been loaded before the plugin gets a chance to l…

The Synthesis and MIDIDevice plugins happen to load too late in the engine loading process on startup, which makes them unavailable when loaded after initially being used. Changing the .uplugin file on both plugins to have the "LoadingPhase": "PreDefault" makes these plugins load in before your project files, fixing the issue. .uplugin files are interpreted at load-time, so you don’t need to recompile the engine. The .uplugin file on these plugins is in their respective folders in (Engine Dir)/Engine/Plugins/Runtime.