Hey everyone! I’m excited to announce my return to the UE4 Marketplace and my release of the 4th entry in the Engineer Collection, Hallways Vol. 2!

You can get it now HERE!

If you’re new to the series, the first 3 products in the Engineer Collection are available free of charge. Check it out HERE!

Check out the trailer below 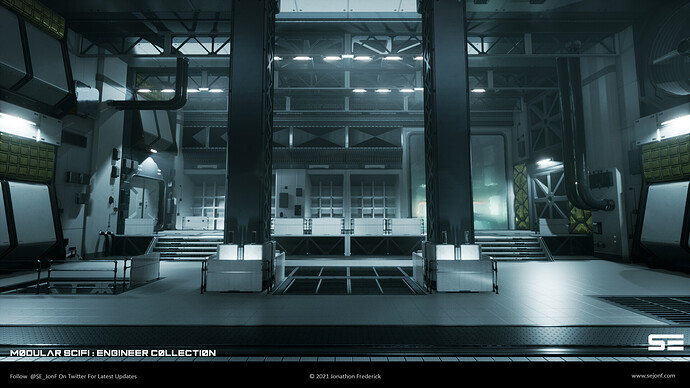 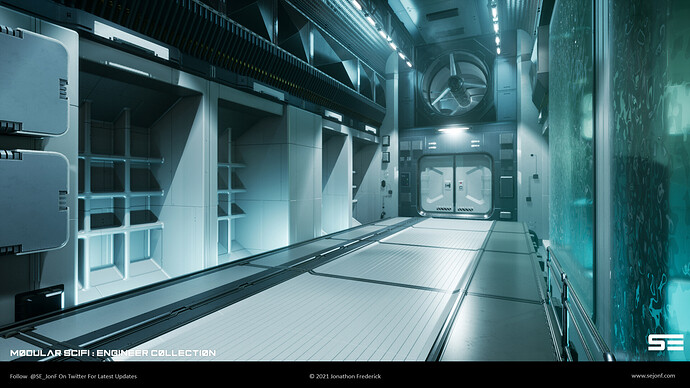 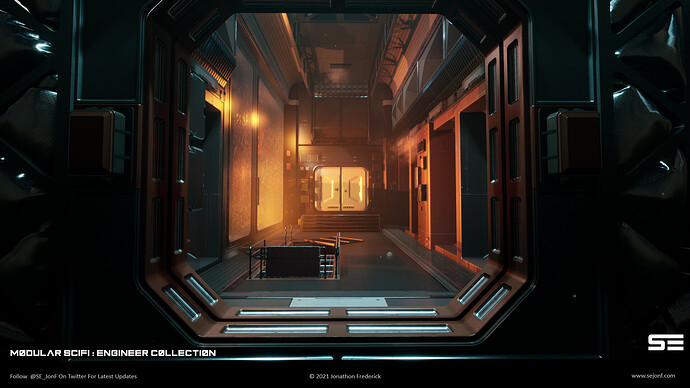 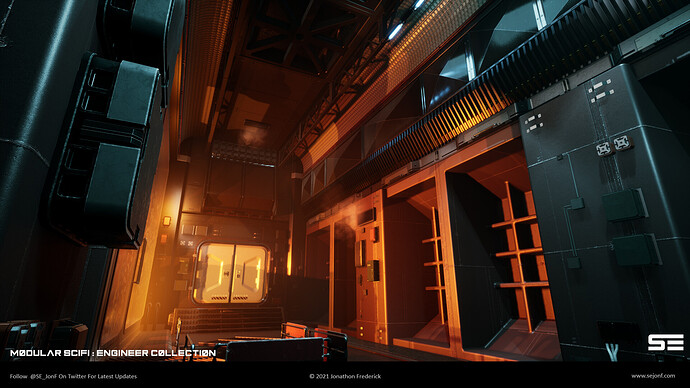 Check out more screenshots on ArtStation

From your previous packs, I’ve made few UT4 maps which you can see how I’ve use the assets in DM-Chroma, DM-Coda and DM-Cruel

I see that many assets are reused one? But your scene look fantastics anyway!

Long time no see. Thanks for sharing, those look amazing! I always love seeing how people use the packs in so many imaginative ways. =)

Not too many actually, but given the nature of the collection styles there are a few reused assets here and there for the sake of cohesion. With this style in particular, certain props are used to provide a busy look to the walls as opposed to the architecture alone. Basically pieces that were in the original Hallways pack for that same purpose, nothing from the Props specific one. And then depending on the product doors/doorways may also need to be shared but in this case since I made new ones that wasn’t necessary. =)

THX. I love your assets but honestly, for making playable levels, they’re really hard to use. You can see the issues I’ve gone trough by reading DM-Cruel details. Therefore, the assets themselves are really great!

Hope you got lots of sells with this new pack

Genuinely surprised to hear that actually. The packs are designed to snap together rather simply and most users I’ve corresponded with have always made note of how easy they found the assets to both use and customize.

I see you mentioned you had to so some things by scratch to get them to work in the UT4 editor, which I’m assuming is due to the difference in engine versions of whatever unique aspects Epic may have included in that version of the engine. Unfortunately these were designed to work within the UE4 ecosystem, so using it outside whether it be to mod another game or Unity will no doubt require extra work.

As you mentioned in your post, the pieces are designed to work in certain manners. For example it isn’t intended for you to use the ceiling as a wall mesh, or the floor as a wall mesh. Doing things like that would force the pack to be too homogeneous in design which can take away from the distinct nature of the physical structures. While pieces like floors, walls, ceilings, and the different meshes that make them up, fall under certain categories - I always aim to provide several variants to help break up repetitiveness. This is generally demonstrated in the example environments provided.

The thing about making modular environments is you’re faced with 2 choices. You can either make something entirely homogeneous which, as you described in your blog, would allow you to use any architectural mesh for any purpose. Or you can make them with distinct purposeful pieces that stay within certain confines. I.e. a set amount of walls, ceilings, floors, etc. My assets choose the latter, mostly because when you opt for a homogeneous approach you can lose distinct characteristics in the architecture because everything is forced to fit within certain confines. It’s too restrictive on design. Pieces will ultimately lose any overarching identity. Doing things like that would make subsequent packs almost entirely unnecessary as they would adhere to those same strict forms.

The Modular SciFi Series has always been about providing distinct and thematic assets of a similar style in an ever expanding catalogue. So assets used for hallways will have a physically distinct look from assets used in an elevator, or hangar for example. That was definitely a deliberate choice I made early on.

At the end of the day, the way I approach these assets is from the standpoint of someone who would use them with level design. Maybe not necessarily level design for an arena FPS which has different architectural design forms, but certainly for someone looking to create complex scifi environments within a set style. I put the same thought and quality into my marketplace products as I do my own personal project assets.

As an example, this pack was designed no differently than the first Hallways pack in that I designed this as a single hallway in Maya. However as you can see in the first screenshot, those exact same assets that were specifically intended to be hallway assets can be used to create massive rooms. Not just hallways with an intersection, but much more if you wanted to. And that’s the beauty of successive packs in a series, the more assets that are released with a certain style the more possibilities explode when it comes to what you can create. That’s one of the main reasons I chose to showcase that in the example environment this time around as opposed to just telling people about it.

Like I said above, the majority of customers I’ve interacted with have always praised the ease of use and customizability of the assets. And they’ve often times shown me ways to use them that I’ve never even considered. But I do appreciate your feedback on the matter coming from a different point of view, having used them in an AFPS setting.

Hope that clears things up. =)

I understand your point, no worries

The thing with FPS like Unreal Tournament, Quake, Doom, etc vs others is that crafting a pleasing architecture without being repetitive is way more difficult than a demo scene.

In many, many demo scene (not only yours), almost everything is on the same height without weird angles to connect the rooms. In FPS in general, in the same room, you’ll find various floors height and wall angle that aren’t in 45 or 90 degrees. For example, most of the time, mappers will put the wall meshes at the lowest floor to cover from the floor to the ceiling.

So indeed, making a demo scene is relatively easy and cut the repeating aspect by using various mats is a common way to work. Making a complete FPS level with interconnected rooms with various height and shape is not the same at all. It’s like comparing apple vs tomatoes.

Like I’ve said, it’s not negative. It’s only harder to work with this kind of assets for making FPS like UT.

No worries I didn’t take it as such, I actually think we are in agreement on that. Arena FPS map design is far more complex if we’re being honest, precisely because of the verticality and unusual angles that are often incorporated in their map design.

It’s something I haven’t tackled myself personally, but I definitely admire how level designers in AFPS can craft such a fluid layout with unconventional architecture. Maybe in the future I’ll craft a collection specifically dedicated to those architectural styles. It would definitely be a welcome learning experience. =)