I am having serious problems when trying to launch my project on iOS platform. I don´t know why my mobile provision is not found, however I located it in [MyProjectDirectory > Build > iOS] as tutorial indicates. I have generated this mobile provision severals time in case that were the matter, but it didn´t work anyway.

I have followed the “iOS Quick Starter” tutorial as it commanded, but when I package the map in iOS appear the second image error.

Anyone could help me please?? I am an architect, not a developer. 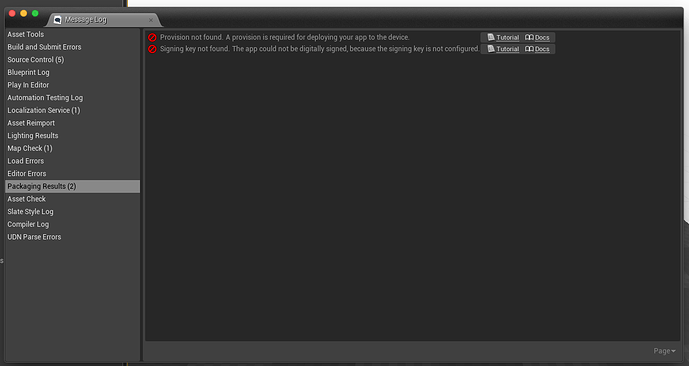 Have you created a developer account with Apple. This will cost a one time fee of $99 but it is required in order to acquire the certificates and provisions needed to deploy to an iOS device.

I did. I also have downloaded developer certification and mobile provisioning. The last one is located in build folder inside the project. I have followed the tutorials. I don’t understand why it´s not working.

In the first image above, you will have to press the button that says “Import Certificate” and when prompted, navigate to the folder where certificates and provisions are located and select the certification file. Then, above that, do the same for the “Import Provision” button, only import a provision file this time. In both cases they should be the only ones you can select.

Once imported, you should be able to launch on or package for an iOS device. Let me know if you’re still having a problem after that.

That´s the matter actually. I have tried to import the provisions I have downloaded from apple.developer website several times and it didn´t work. It says “no provisions found” every time I try to import it. As regard the certificate I think it´s ok, I asume it´s correctly loaded as I can see.

Mobile provision file is located in project directory > Build > iOS and I have downloaded it 3 times from the apple.developer website in case it was corrupted but didn´t work either.

I hope hearing from you again because I´m truly stuck at this point.

Have you changed the bundle identifier to match the one defined in the provisioning profile?

The editor won’t show any profiles that don’t match that Identifier.

I ask because it’s still com.CompanyName.[Project_Name] in the picture you posted.

Hello FacePalm, thanks for your answer.

I don´t know what I have to change in Bundle Information dialogue. I´ve just followed the tutorial “iOS quick Starter”. Is there any tutorial that indicates how to set this infomation up?

You set your Bundle ID as shown in Step 5 of Step [5. iOS Provisioning - Create App ID][1]

Since we have not heard back from you in a while, we are marking this post “resolved” for tracking purposes. However, if you are still having a problem with “no provisions” found then respond and let us know what you have set as your Bundle ID in your provisions (log into your Apple Developer account to see this) and we will continue to troubleshoot.

I have the same problem. provision and bundle id are correct and equal. but I still have this error

I have the same problem. provision and bundle id are correct and equal. but I still have this error