Alright guys! So I have this problem. I’m still trying to get familiarized with BluePrints, and it’s been hard. I understand the logic behind everything, but still cannot apply that to BluePrints.

Alright so I have 3 bananas classes which need to randomly spawn from A and die in B (and then when death, spawn another one but not instantly. In random time). Banana dies also if touches the player(monkey), but even after that It should respawn after random number.

It should spawn on A, and move animatedly(I guess it’s called as projectile), and move to B.

How can I do that?

I’ve tried using projectile components and stuff like that, But still no luck. Same with the respawn system. 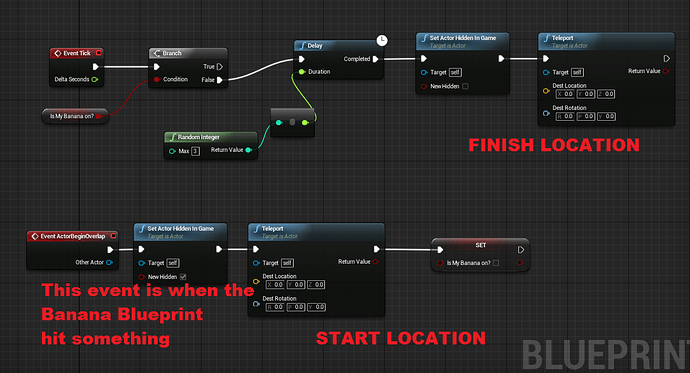 The movement for the banana should be placed as Flipbook.

The movement for the banana should be placed as Flipbook.

There’s no animation so why Use a Flipbook? Can’t I program with BluePrints for it to move like a projectile to B?