I am trying to import the ‘Mannequin’ folder from the vanilla 3D set-up to another project. It tells me that it was all copied successfully but it never appears in the content browser of the project. The files have been copied over because I can see them in my browser.

I have noticed that it saves SK_Mannequin as a .uasset, but if I export SK_Mannequin manually it appears as .FBX

I annotated a screenshot just to clarify things. 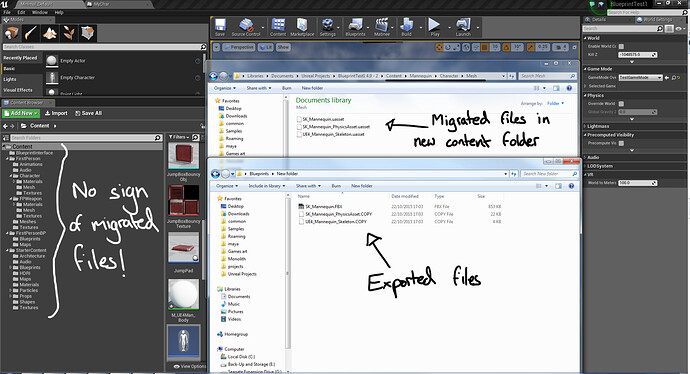 This happens sometimes. Usually if you don’t have the editor of the final destination; It won’t happen. If you do, There’s like a 20% chance of it happening.

What you can do is either restart the editor and it should be there and if all else fails just migrate again.

Also remember, If it’s in a sub-folder pre-migration, It will be in the same folder post-migration.

Thanks, I restarted once after and it didn’t appear but I have just restarted my computer because of an unrelated crash and it’s there now.