I am receiving the following error on when trying to build a fresh game with UE5 using Rider. I was receiving the same error when using VS2019 with UE4.26. I have done some research online regarding the error and what others that used to troubleshoot, but I am still at a loss to determine how to fix the error.

Any help provided would be tremendously helpful and I know would help others in the community. 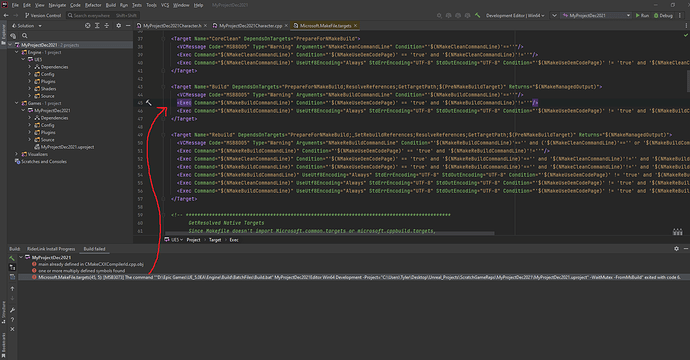 I was having issues with UE5.0 source build so I deleted and re-downloaded UE5 Early Access. Getting this same error now when trying to build my Project I started with 5.0

Did you find a solution?

I had the same error. Resolved with checking in the project the last changes i’ve made and actually i wrongly used “UFUNCTION(Server, Reliable)”. hope this helps

Had a similar error and the issue was a file that Rider was trying to write to that was not checked out in Perforce and thus read-only on disk.

Rider somewhat unhelpfully collapses the error log into just that message, but you can expand it with a button on the left.

I believe that found the problem, if the Live Coding configuration of integration is enable in your Unreal Engine 5, can be this that are creating the conflict of Mutex

Try disable the Live Coding or press Ctrl+Alt+F11 in the editor(VS2022) or game, and try compile again.

This information are in a log file from Unreal Engine 5 in:

See below the complete message:

have many more informations, but are personal information from my project and path from ssd