Hi does anyone have this problem when you move your meshes and they suddenly either, snap to another mesh, change direction when your moving the mesh into 1 direction or their height changes while moving them in UE4 editor.

I did what you said but the problem is still there, I tried changing a few snapping options but the results are still the same, maby it’s a bug in the engine?

@Crash: Do you have this with BSP brushes or static meshes?

@Crash: Do you have this with BSP brushes or static meshes?

or their height changes while moving them in UE4 editor.

The only way how I could explain that is, that you accidentally move it with the little point in the middle ;):

Yep, it might really be a pivot issue just as fighter said…I had some strange issues with BSP brushes (pivot all over the place), but static meshes work fine for me. 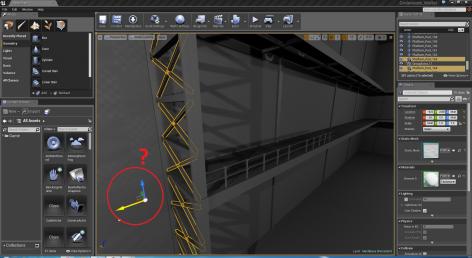 See this is what I mean, I am busy making a copy of the mesh as you can see in the picture I am moving the pivot to the left side while groug mesh is selected and it doesn’t move until I move a lit bit more then the mesh suddenly snaps back to the pivot again.

Hmm, so the mesh is offset from the pivot when you drag, and snaps back when you’re finished moving it? Strange…

Is the mesh grouped or a single entity?

Is that just happening with special meshes (e.g your own ones) or with all? -> when it’s just a special one, could you probably upload it somewhere so that we can take a look at it?

It’s my own personal meshes, in the picture I have grouped the meshes together, but even when they are single meshes the same problem occurs, but I will upload a video of the problem so you guys can see what I am actually talking about.