I have been having memory leak issues with UE4 since Ive been using it. Which was around Nov. of 2015, version 4.10 I believe. I always thought it was my computer, which it still might be. /shrug

When opening my player character BP along with one of my AI characters BP the initial use of memory goes up. Should I close both of those the memory doesn’t drop. But should I reopen them, the memory does go up but not nearly as much.

So, on first use of PIE, memory use goes to 3gs, play for a few mins, close it, memory might be near 4gs. Stays at 4gs or so. Go into PIE a second time, memory jumps to 5gs, play a few mins memory use might be around 7gs at closing and stays there till I open a third PIE and so on…

After doing this several times, eventually my RAM is at its max (16gs). At this point my computer is pretty much at a stand still. I close UE4, if I can, and eventually the process for UE4 will turn off. This can take several minutes. Usually I’m to impatient to wait so I go into task manager and stop the process manually. Which still can take a few moments to clear out of memory.

Now after my long text of explanation, I hope you get the idea.

Is this issue something I can rectify on my computer, could it be something in my games BP logic that stays in memory, or could this be an editor bug?

NOTE:
When playing my level using either mobile preview or the standalone game modes memory use of UE4 editor does not rise (well it does creep ever so slow, but I think that’s due to having BPs open, or maybe even just clicking on and off the edit window.). Either of these modes use about 1.3gs worth of memory. The memory goes up to that point, stays there during playing of the level, then on closing of these modes, the memory use for these processes goes away. Since they are closed.

The memory use for UE4 editor window stays pretty much where it is during these modes. But opening and closing of BPs still effect UE4 editor process memory use which is seperate from these other 2 mode processes. 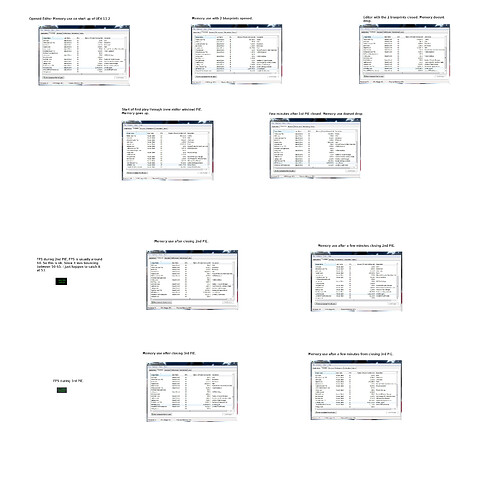 Oh, the process memory of UE4 editor when using a new edit window, PIE, does increase on a fresh project like a third person project. Just at a slower rate.
Which I’m guessing is because there just isn’t as much going on in a fresh project vs my game level with all kinds of actors, materials and such.

One note, UObjects can be explictly deleted, they will be garbage collected when they not refrenced anywhere where reflection system can see. So don’t expect memory won’t drop right away when you close things.

UObjects can be deleted in blueprint? Heh I’m not sure what that even is.

Ill look into that. Thanks.

The memory buildup seems a bit less for each use of the new editor window (PIE), but it is still there.