I made a punching system in my project and I have a few problems, first thing is, when I punch and I hit the AI char the hand goes right thru him , is there any way to make it so it doesn’t? I played around with the collision settings of the meshes in the Character blueprint and the AI character blueprint ,like setting to block all but it didn’t do the trick, could i apply force to the punches so it could also do a knockback which I was planing on implementing anyway that would be awesome , another problem is, I based my damage system on the on hit events fired from the collision spheres connected to the hands , and its just AWFUL, Half of the time they don’t even fire the event , if I’m facing the AI from the back it never fires and it also takes it a while before it applies the damage, is there some other way to set this up? I want to set it up so it does damage when it hits a character mesh and not when it hits a collision sphere I would attach to a character mesh.

This is how I got it set up now it disables the collision because punching enables it like in the tut I linked , and it also applied damage the whole time it was overlapped so it was a must. 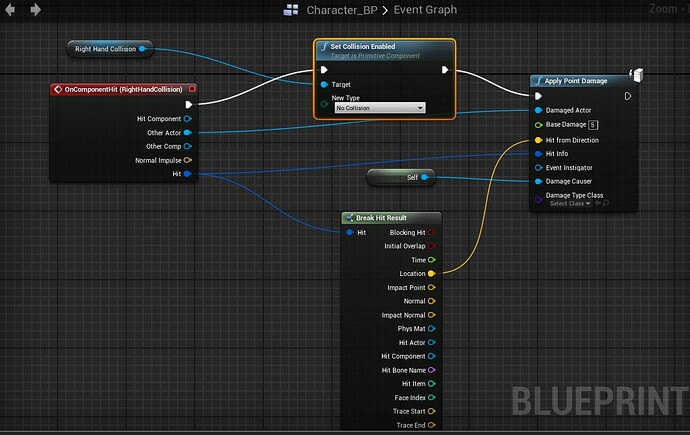 Also my engine has a MASSIVE memory leak , after about an hour or two it takes up 7 GB of ram and UE4Editor.exe stays on even after I close the program and it keeps eating up all my memory and the only way to get rid of it is by restarting my PC, and I tried ending the process and the process tree it doesn’t work it still stays on. If I don’t restart the PC it just crashes eventually. Anybody else got this?

for the hand you either need to enable IK for hands (look in content examples) or make collision on the charecter mesh using phat.

Thank you very much I got everything set up now . the IK wasn’t what i was looking for but learning about phat and playing around with it got me to setup everything how I wanted