The whole project is now available in Gumroad: (UE4) Old Scandinavia - Medieval Village I will update this project as I go because I have a huge list of things I want to add the in the future.

You can now read more about this project and techniques I used here: Realistic Environment Look with UE4 & Speedtree

Project that I started long time ago. I live in Finland and saw this kind of historical village during my summer trip in Jyväskylä few years back. After starting to play Witcher 3 I decided to start working with this project again. Really loving how that game looks and feels and the nature really looks like in Finland. I also been wanting to test some photogrammetry stuff so this project will be awesome place to test that too.

It´s relaxing to make this kind of stuff.

So far my tools are 3DS Max for modeling, ZBrush for detail stuff, Substance Designer for baking and 99% texturing, SpeedTree for tree generating and photogrammetry for some tree textures (No Megascans!). Engine is UE4 4.17.2 with everything on

This is lovely! So many little details bringing it to life, like the reflections on that puddle or the material details.

If you’re going to do grass, go all the way. Those sparsely placed chunks look awful next to everything else in the scene.

Also something feels off with the lighting here, like your scene doesn’t have a skylight placed in it. You have an extremely bright day, and while sure, you have some trees around, your shadowed areas are EXTREMELY dark. I thought at first that maybe my laptop’s screen was just garbage, but looking at it on a proper monitor now I still barely can make out what’s going on in those shaded building areas.

Additionally, all the wooden objects in your scene are almost exactly the same shade as each other, and while this may make realistic sense, it is absolutely atrocious for visual clarity. It’s **** near impossible to pick out those barrels, tub, and poles holding up the roof, and what I’m guessing is a door, from the mid left house in the second picture at a glance.

Alright start, do something to sort out your grass and lighting, and differentiate your objects materials somewhat.

The grass is indeed a bit strange. More evenly spread out gras chunks would work better I think. But other than that I really like it. Good overall consistency in graphics quality and style. Great work!

Grass could be worn down maybe???
Looks great, show us some video!

Thanks all for the feedback!

Grass has been very hard to get right in editor. I´m afraid that if I increase the grass density it will eat a lot of performance. I also don´t like the automatic landscape grass thing because I would like to have more control. Going to increase the density and see how it looks.

I´m also going to tweak the lighting. I have skylight intensity 1 but I´m going to increase that a bit. There are so many different values to play with

I will take some video footage when I have things fixed.

Tweaks to grass, lighting and so on. I also put this to 4.16 prev2 to see how new toys works. I also made a night/evening sublevel just for fun

My thoughts about UE4 4.16 prev2. Volumetric fog really makes a HUGE difference. When making nature environments its really helps to create interesting moods. Helps to make a feel that the weather is hot or cold. Distance field stuff also works faster now. I got around 10fps more with this update when I checked the compressed distance fields setting. All in all I think it´s a nice update and can´t wait for the final release. 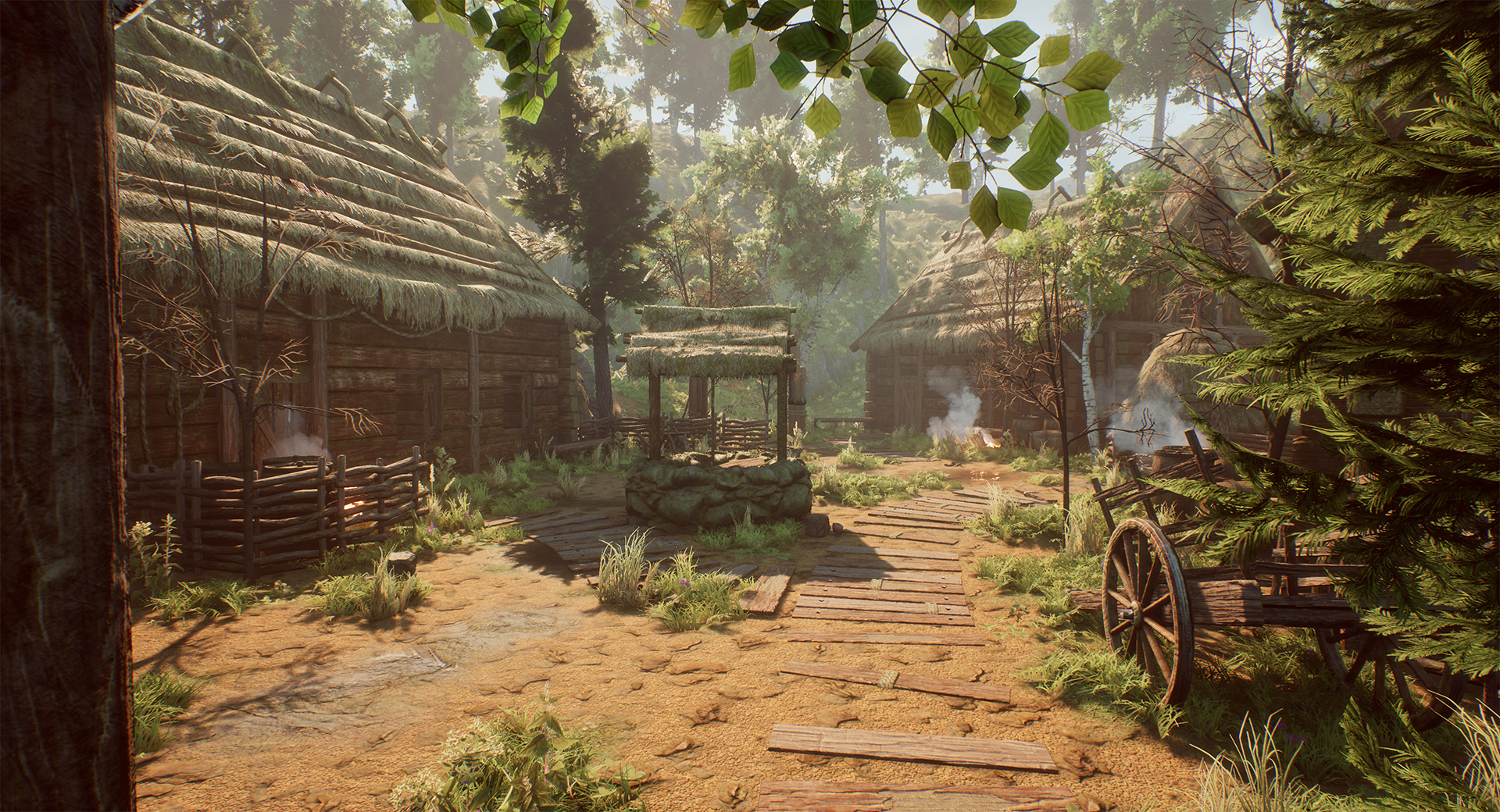 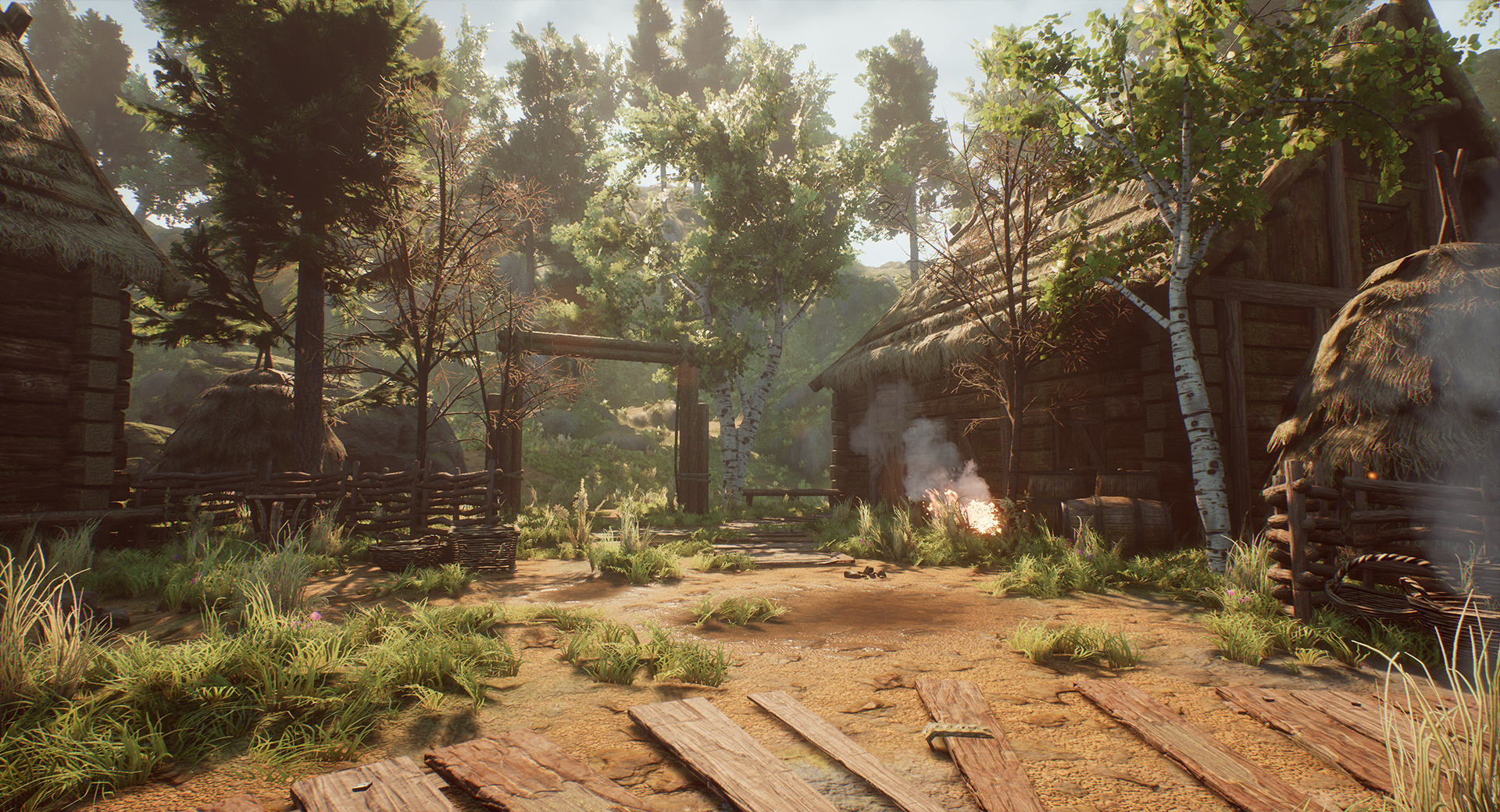 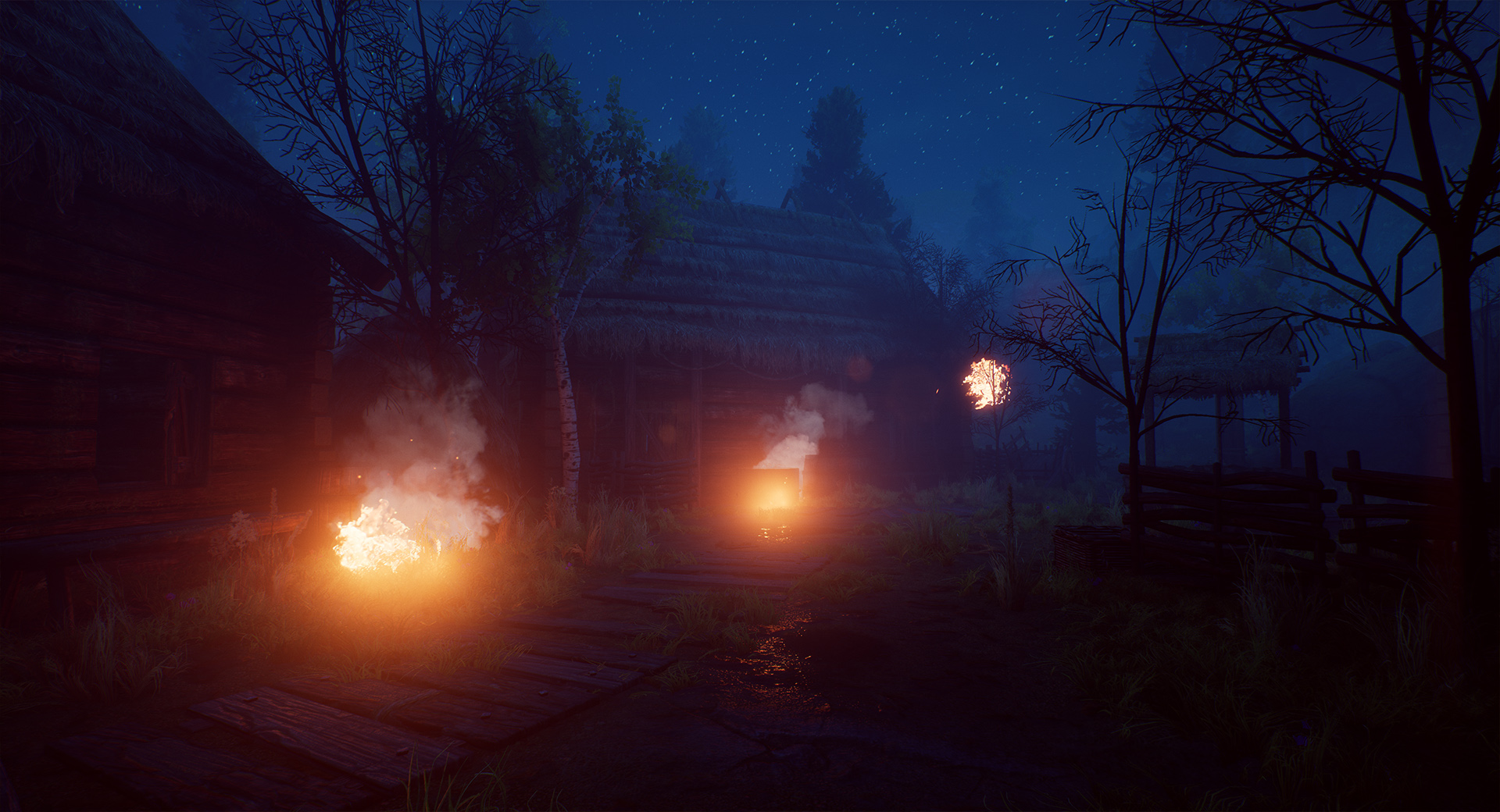 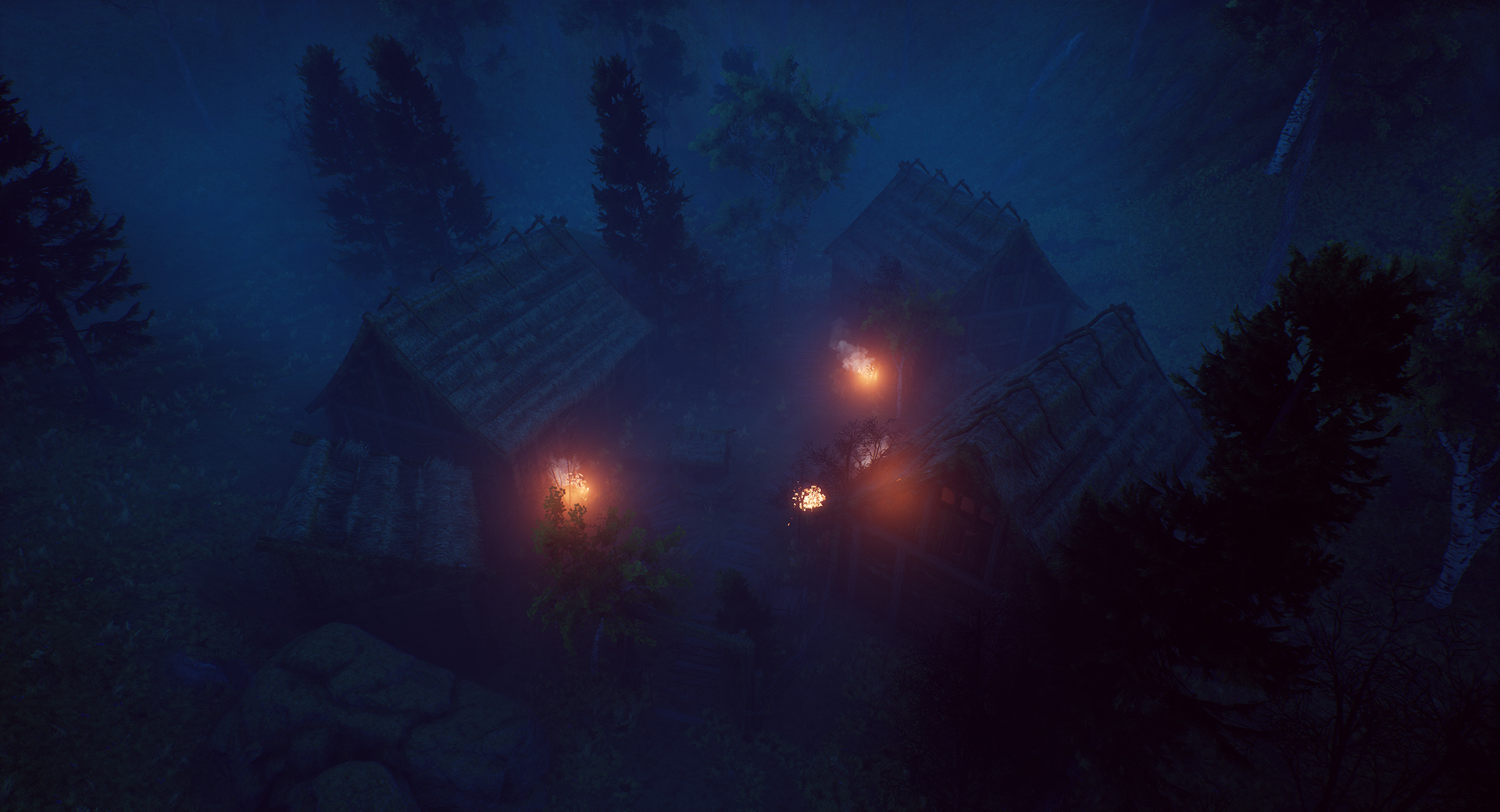 Awesome stuff like allways. The new fog really does make everything just a tiny bit more tweakable to get things just the way you like.

Awesome reminds me of witcher 3 . Which is never a bad thing

Interesting to see nature that I never saw before even thought I (computer) made it. 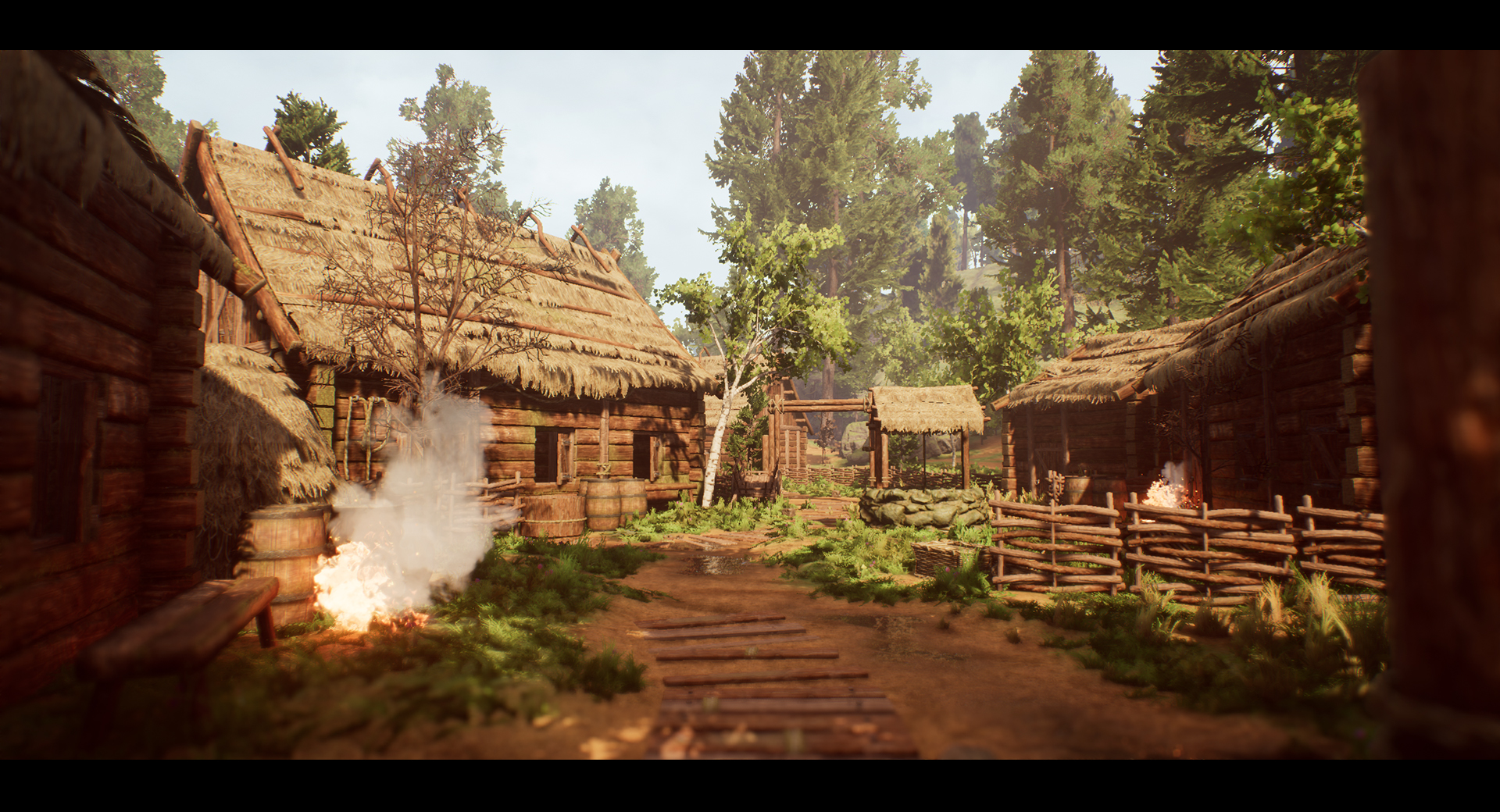 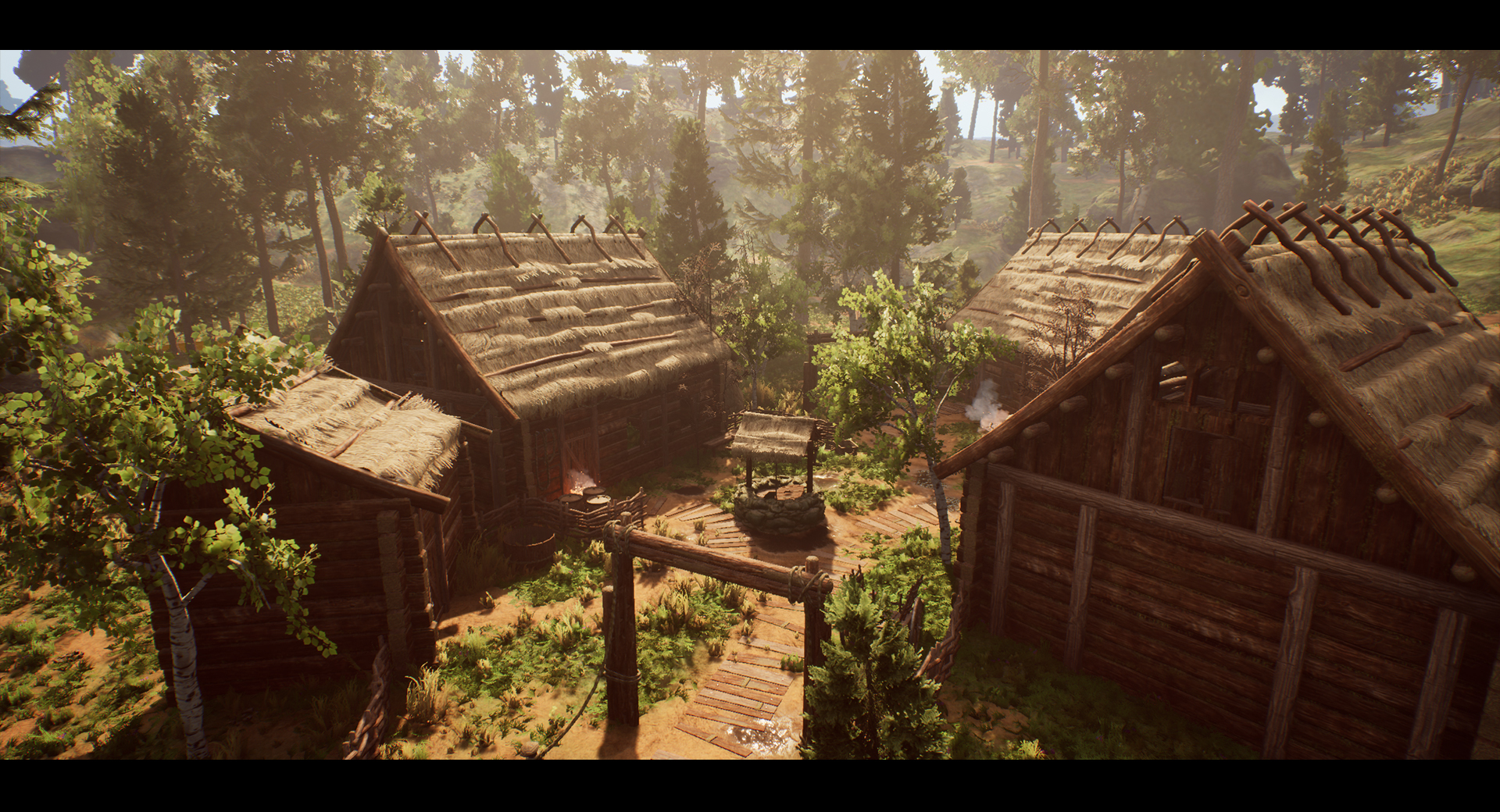 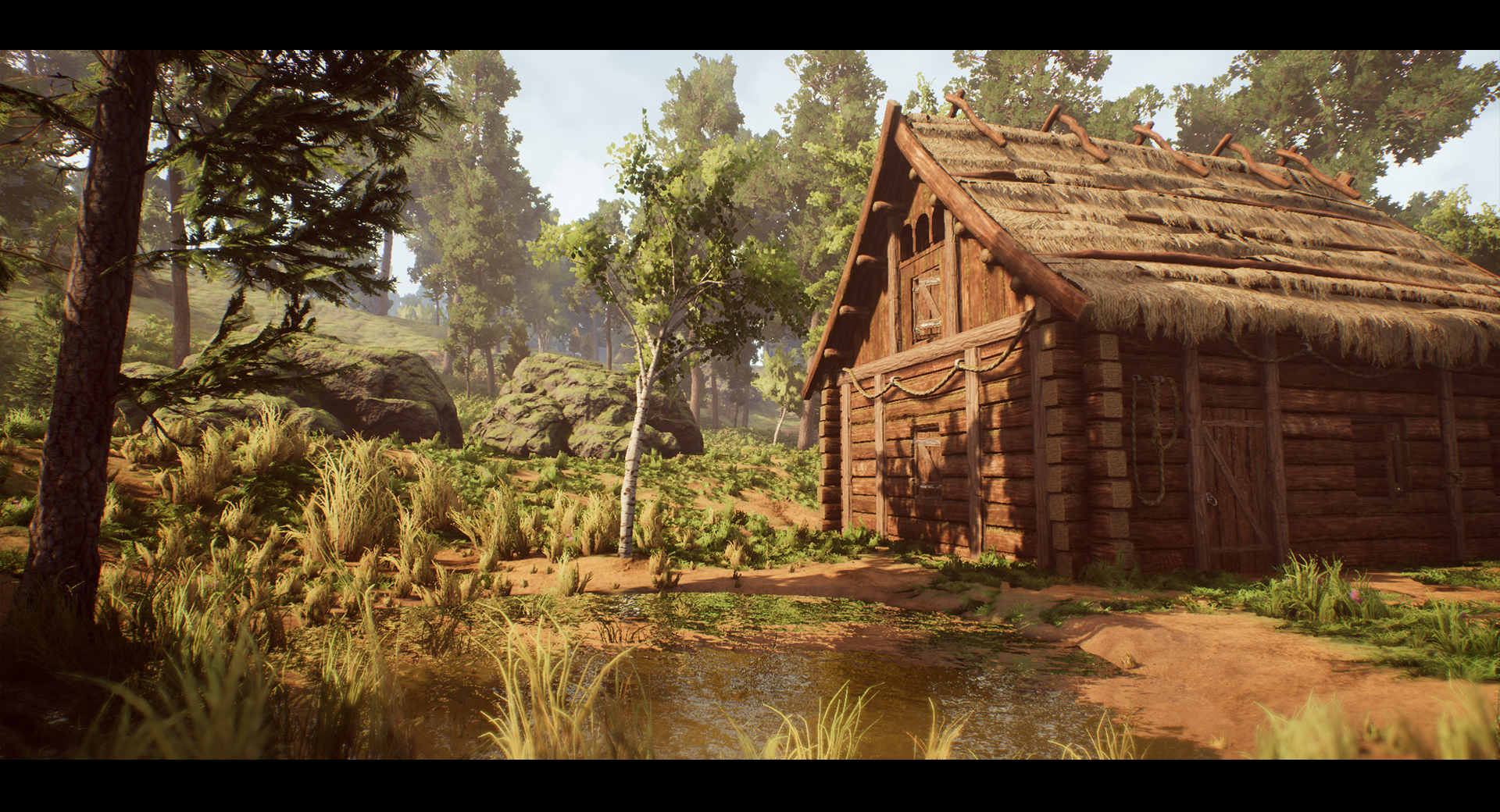 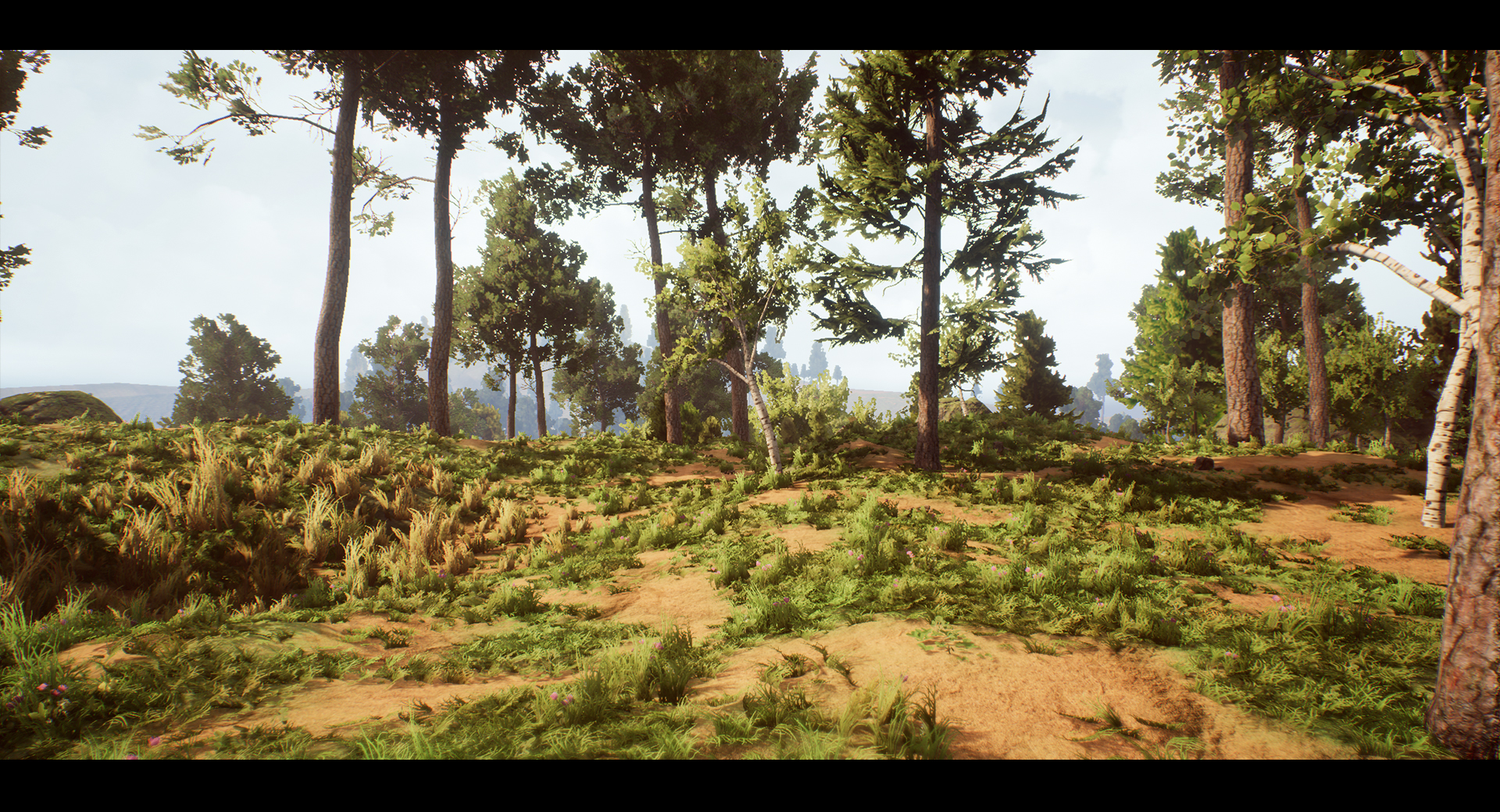 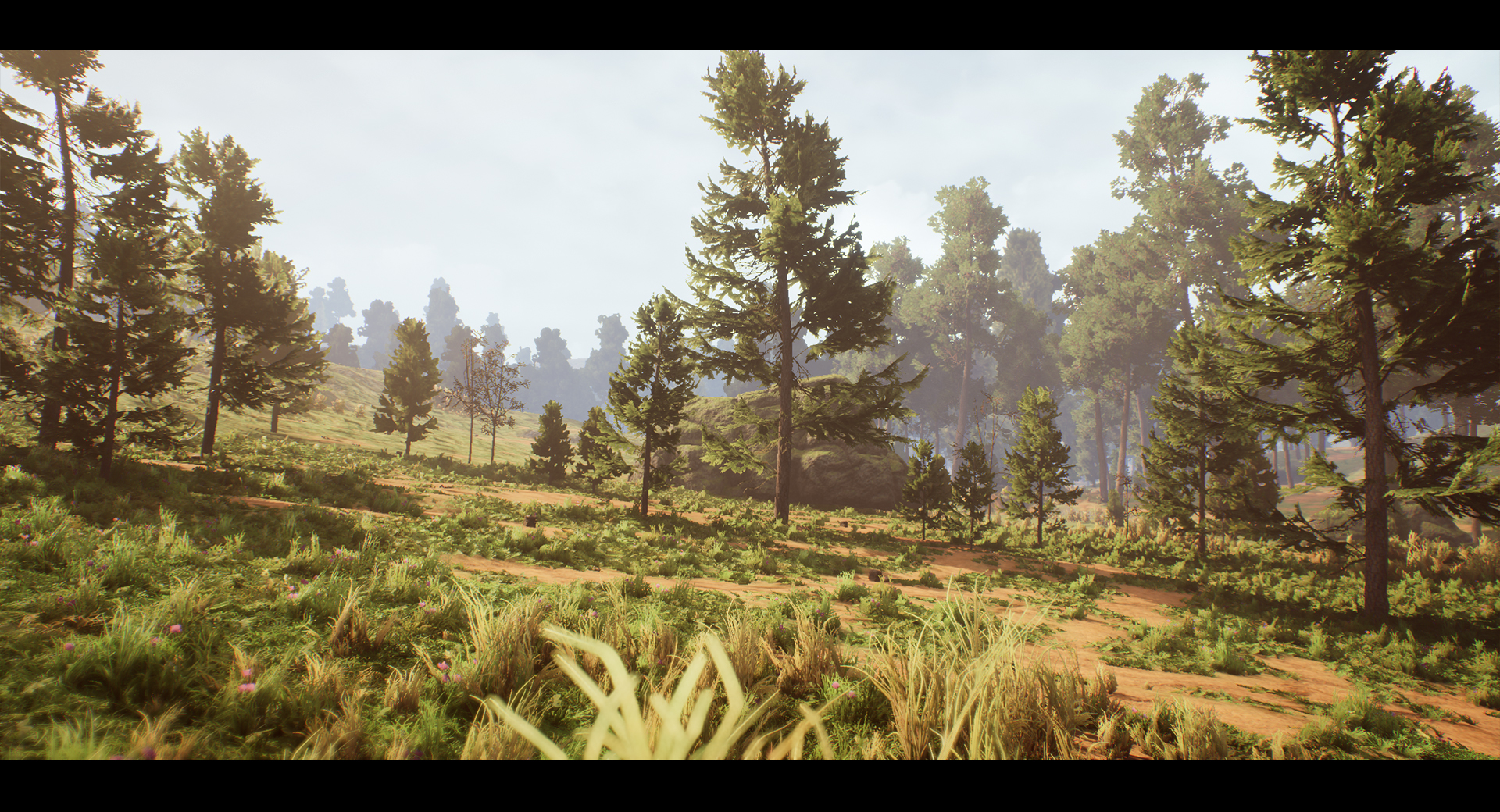 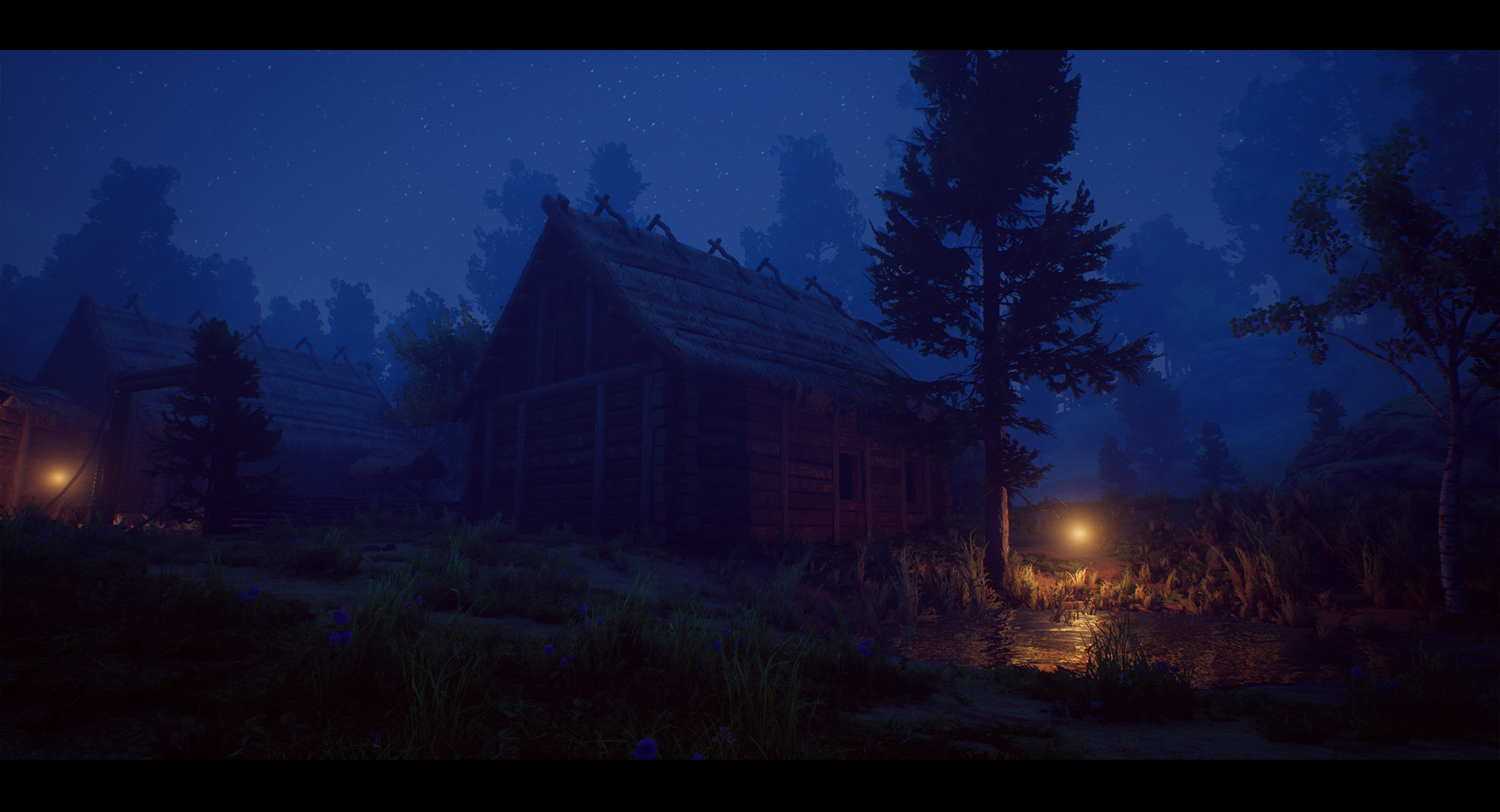 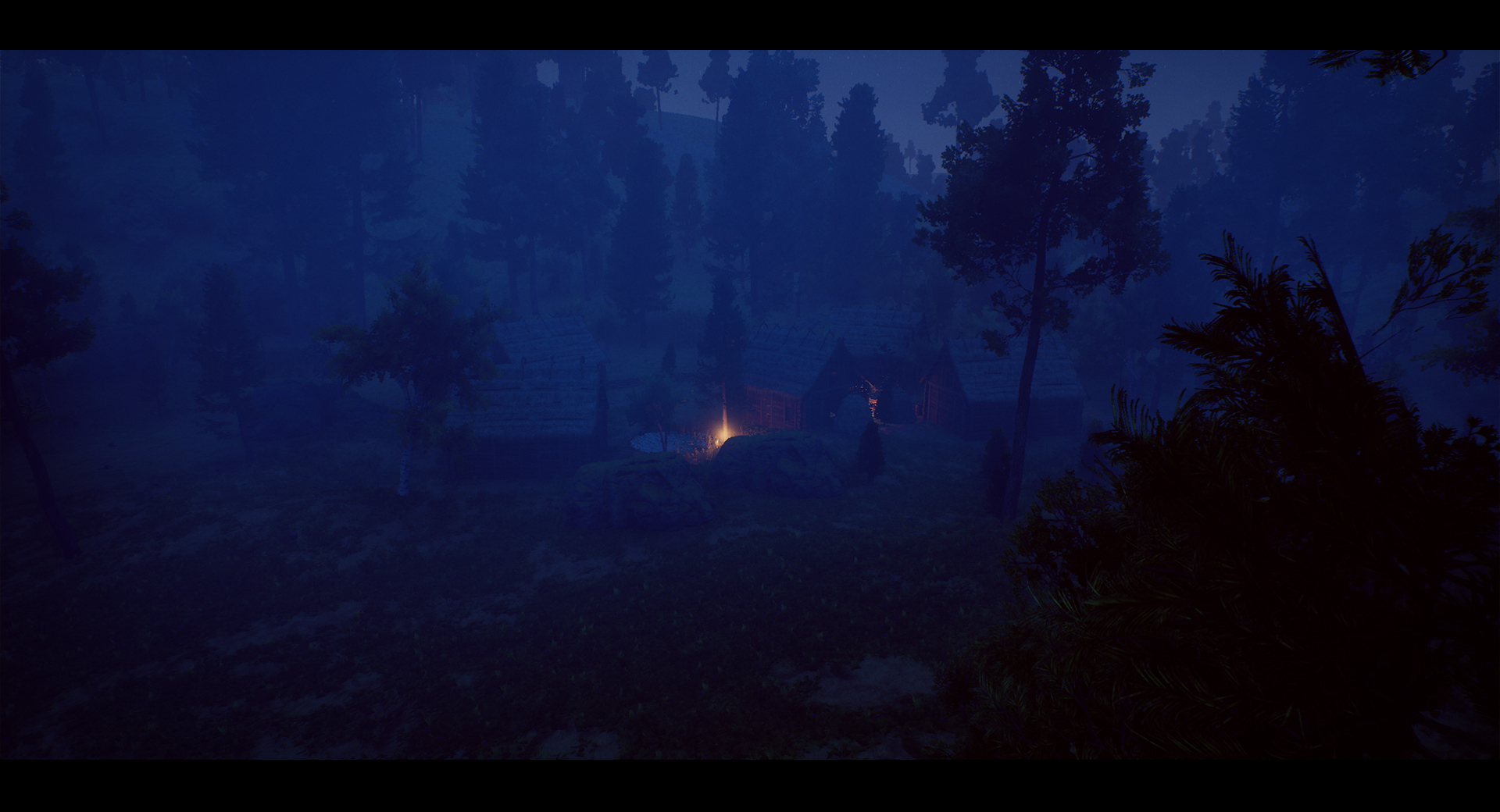 Thanks all for the feedback!

Grass has been very hard to get right in editor. I´m afraid that if I increase the grass density it will eat a lot of performance. I also don´t like the automatic landscape grass thing because I would like to have more control. Going to increase the density and see how it looks.

I´m also going to tweak the lighting. I have skylight intensity 1 but I´m going to increase that a bit. There are so many different values to play with

I will take some video footage when I have things fixed.

You can enable single instance feature on top inside of the foliage painter. You can also disable random rotation and everything. Also when you go down a tab (on the left) you can use the selection tool to precisely move and rotate your individual foliage meshes. I would HIGHLY recommend using the foliage painter to populate your world with foliage, as this way all the foliage mshes are a single instance which only requires one drawcall to render them all which is a lot more performance friendly than individual meshes in your world outliner, which by the way will become a big *** mess soon as well.

I use landscape grass node to scatter grass and small flowers based on the landscape layers. I don´t want to start painting 4kmx4km area manually. This way its batching draw calls but the main issue will be the overdraw. However I have made a lot of changes to density so perf is somehow good. I ended up using procedural foliage volumes to scatter trees and hay so I have more control over things. When using procedural foliage I still have the control to select, move and delete individual trees like I would have painted them. I still would want to have that same kind of control with landscape grass so I could make grass taller/smaller near edges of the masks and so on. Going to post more updates when I got things done. Thanks all for feedback and tricks!

Started lighting pretty much from the beginning. I wanted to achieve baked lighting feel but without baking any lights. I also wanted to have bright areas where sun is hitting but also colder, darker feel when in shadow. Previously it was very binary so now I tried to have that transition from light to shadow to be much smoother. I tweaked a lot of DFAO and tried to balance things so there is no extreme values. 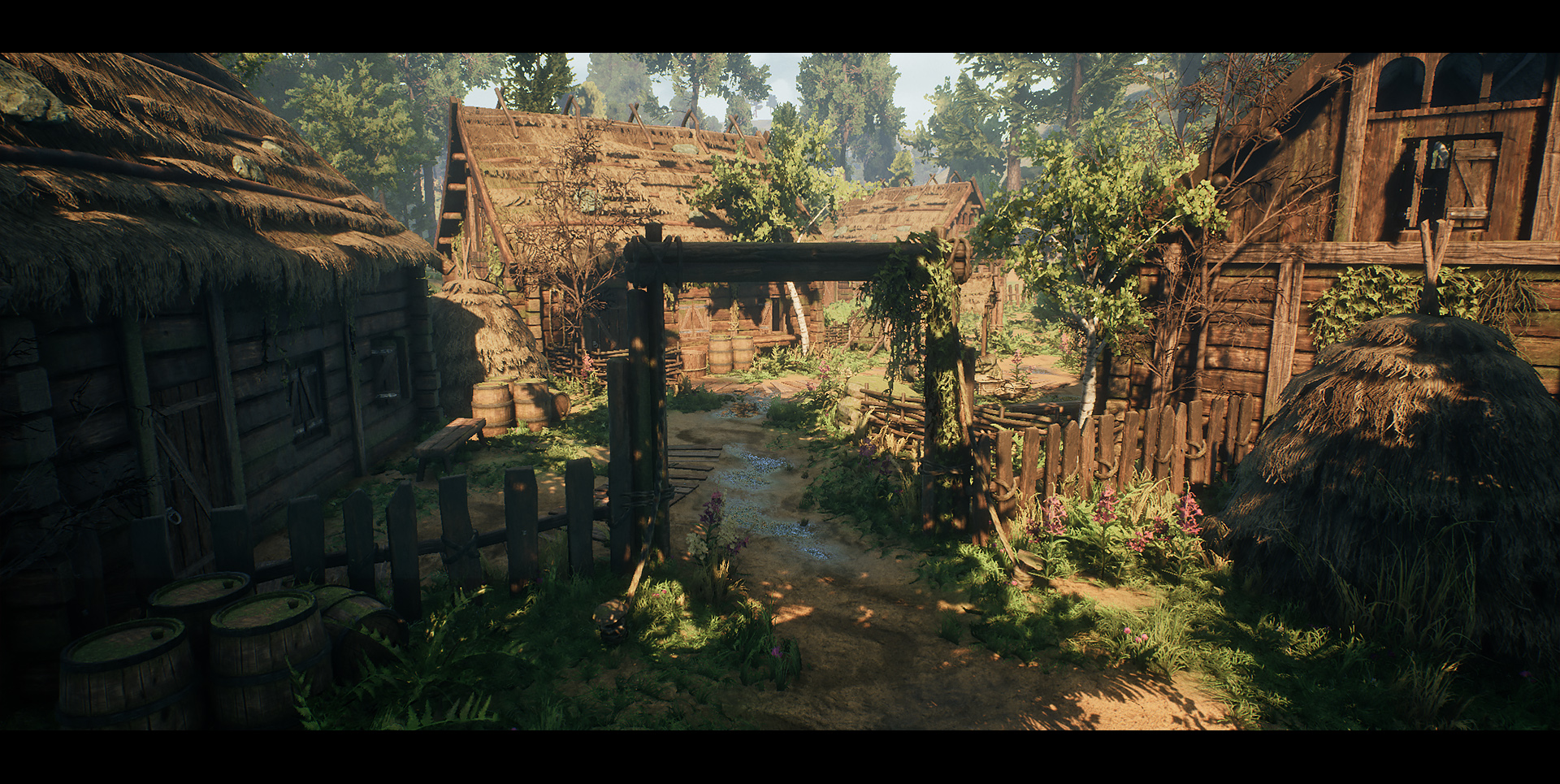 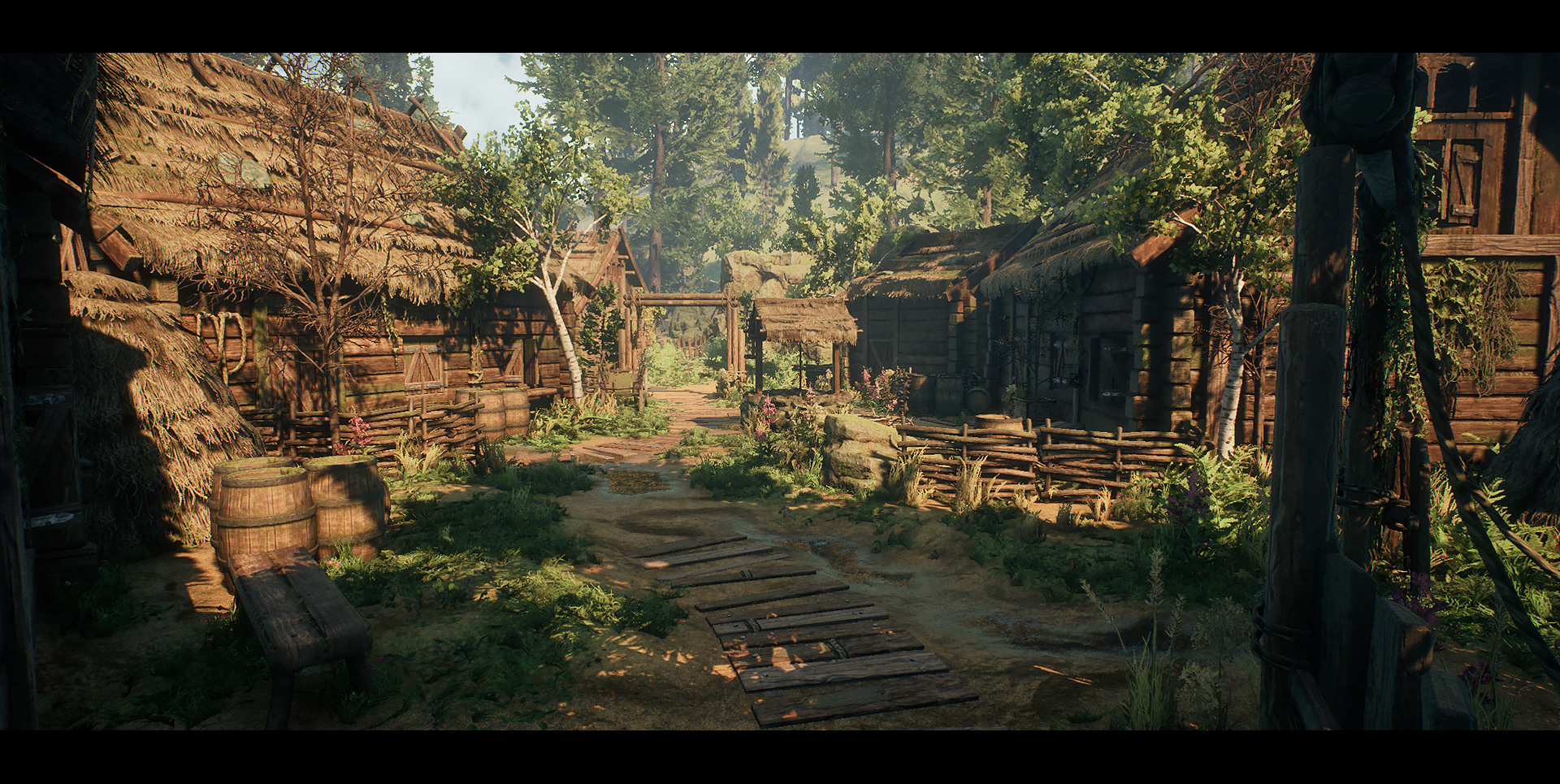 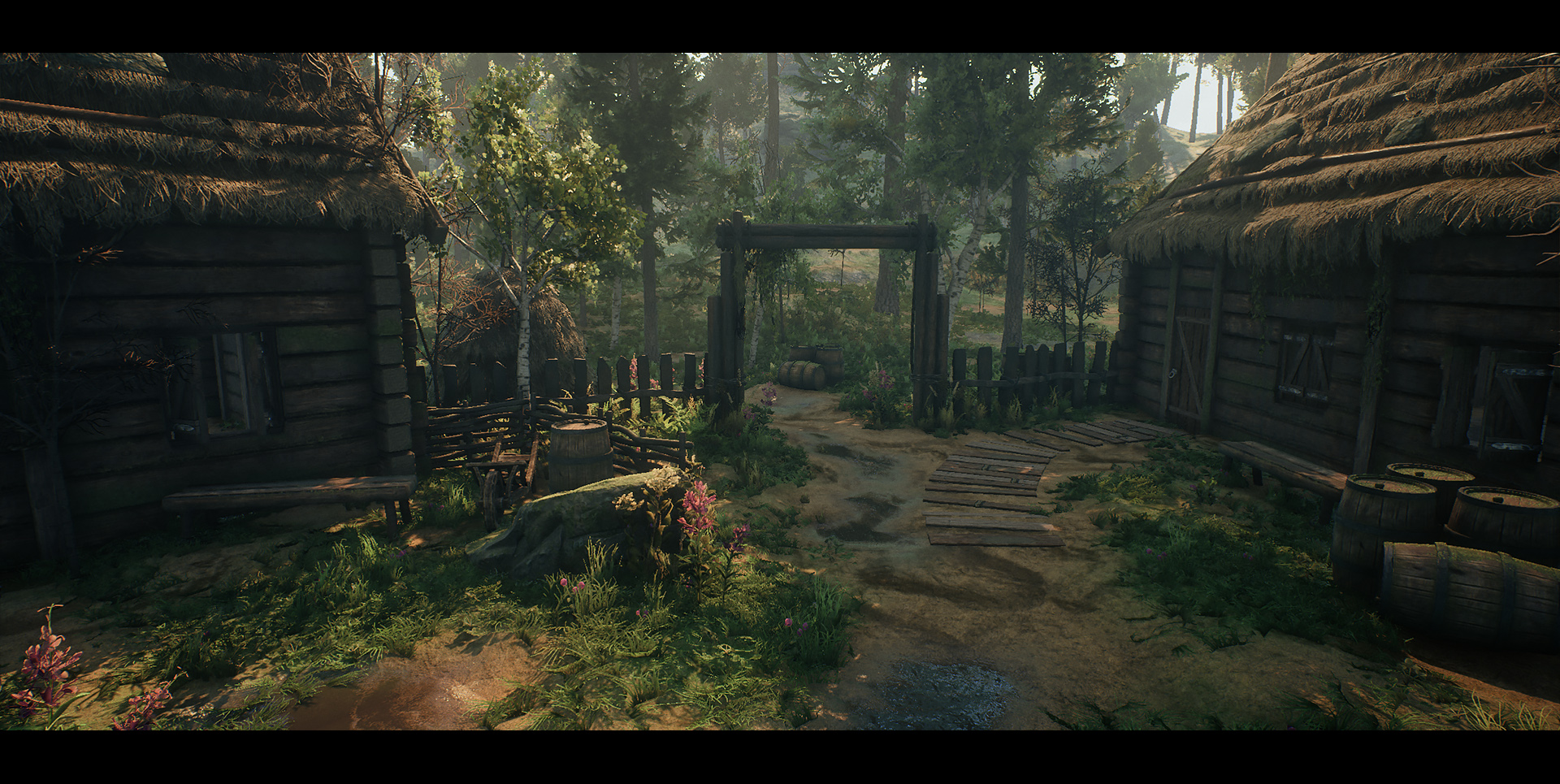 I also looked a lot how other games that uses baked lighting looks. I really liked Uncharted 4 lighting where darker areas feels colder and with baked GI the transition to brighter area is very smooth. Also I wanted to have better reflections when in darker areas so I tweaked reflection captures and global illumination in post process volume. I think I like this lighting setup more and obviously baked lighting can look more realistic but in this case the level is too huge for that. Trying to study different lighting setups really makes me appreciate lighting artists, those guys and girls are super talented and important!

I also tested a new workflow for creating rocks/stones. I first model a blockouts using simple box primitives in max. Then dynamesh that in ZBrush and start using flatten brush to get it look more like a rock. I only want to have broad details because micro level will come from tiling rock textures. Then I decimate it and make uvs. I created rock mask generator graph in Substance Designer where I also bake maps. There I generate masks for edge wear, moss and second rock texture blend. I made a master rock material in UE4 that has a bunch of different switches. I also made few different tiling rock textures with SD. 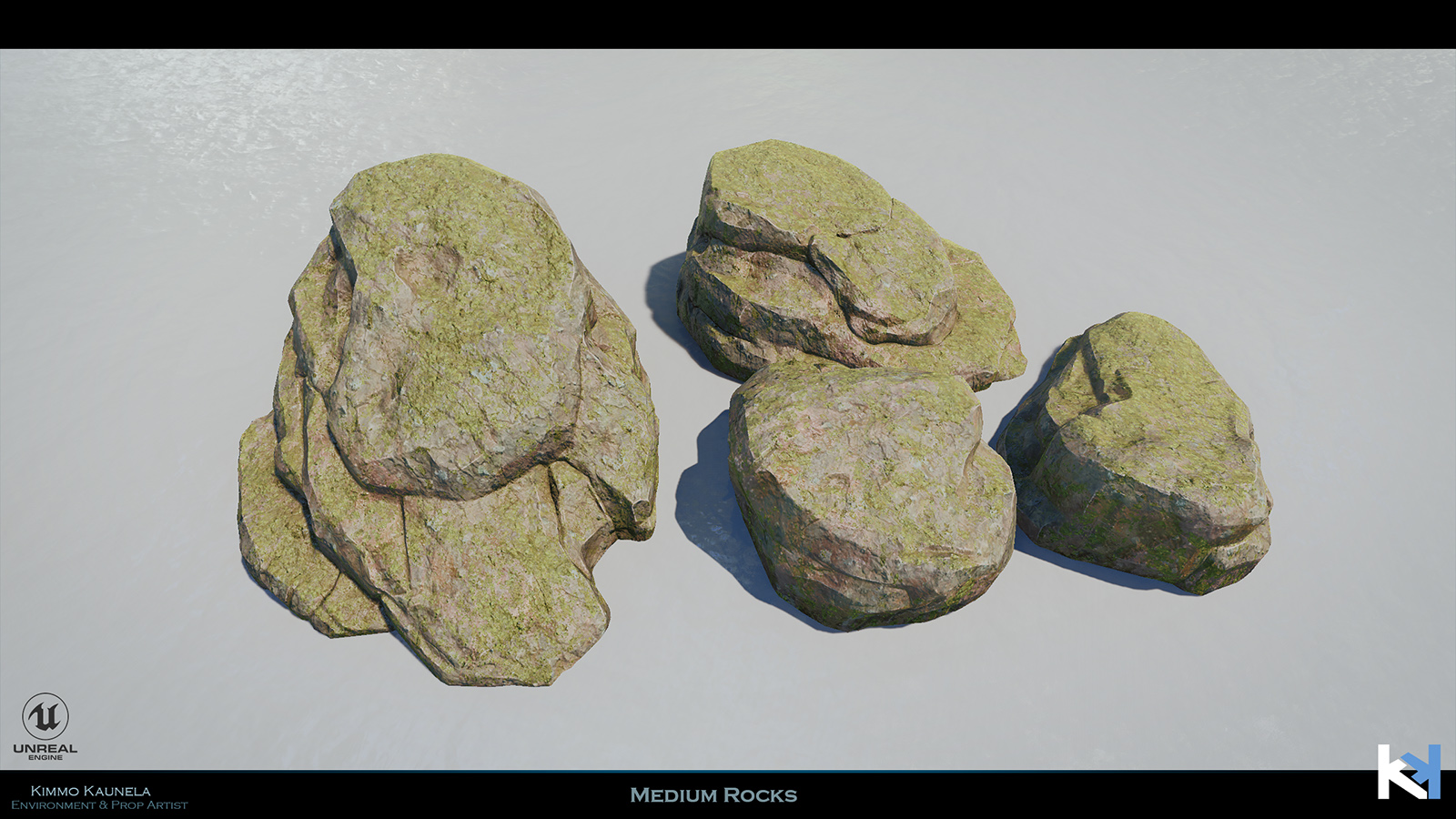 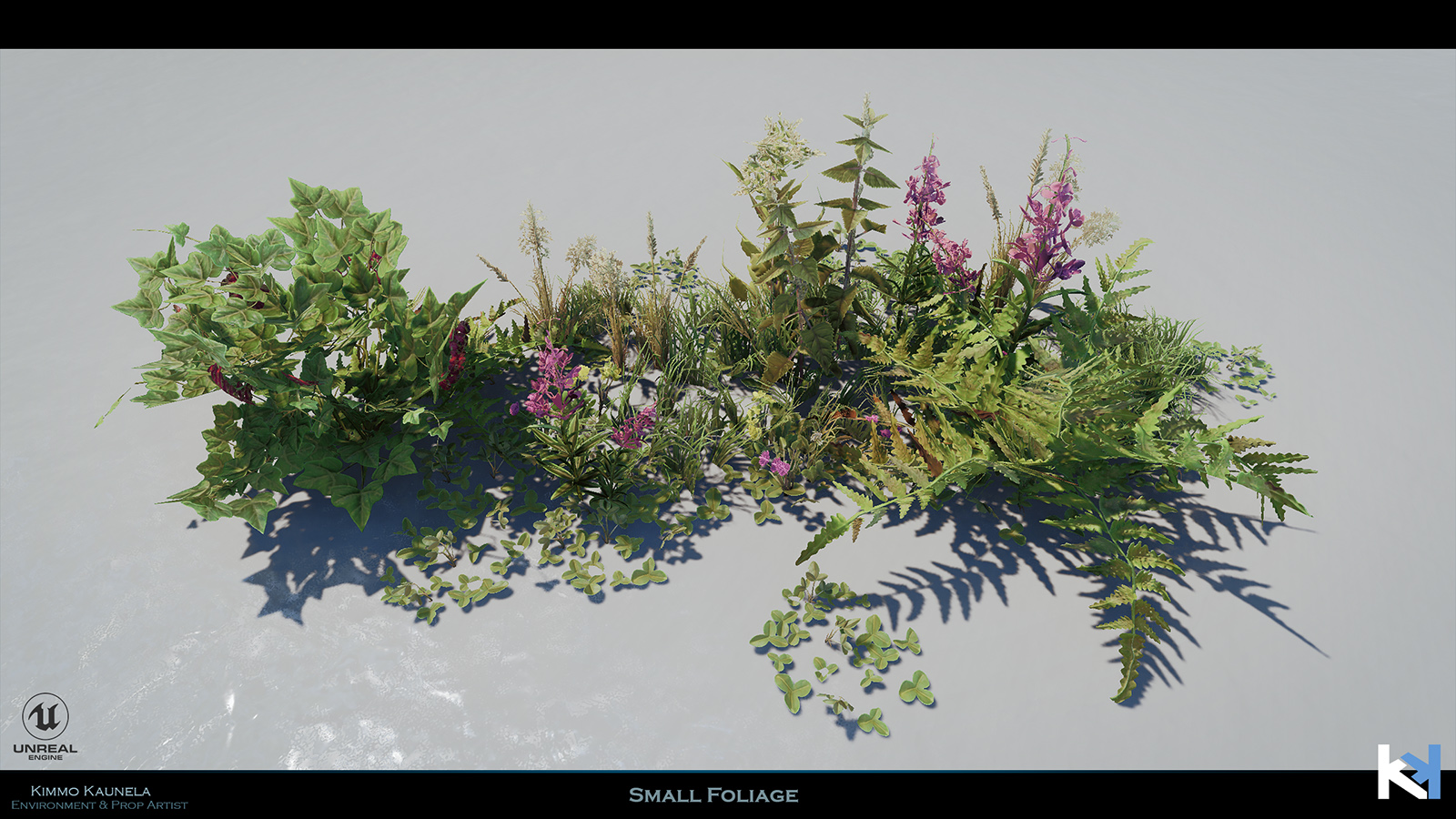 Wow, this is great !

Small updates to this project. Changes to materials and assets. I also decided to give LPV a try. I think it does a lot to the overall lighting. Now the difference between directional and ambient light is much smoother. I also noticed some issues with LPV but those are just a limitations that I can´t do anything about. I´m going to left lighting as it for now. I guess this is as good as I can get it with dynamic lighting.

I also made a somehow modular rock wall and a Substance Designer graph that gives me mossy rock textures based on hi-poly sculpts. I´m going to have fun with this in the future

Its fun to make stuff with SD when you have made a huge library of different materials.

I made a small article about this project so far. Realistic Environment Look with UE4 & Speedtree I cover how I made a dynamic day/night cycle and how I used procedural scattering tools to populate foliage. I also share some techniques how I approach modeling and texturing.

Here is a fast footage I took in a hurry: 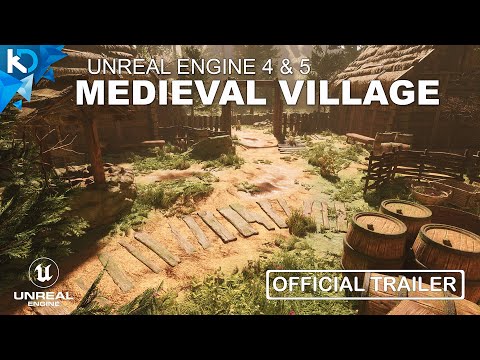 Some shots I took that are using my fully dynamic day/night cycle.

Are you going to put this on sale sometime?