I’ve got a Media Player and am controlling it through my level blueprint. It works fine in normal editor “Play” mode but when I try to write out a moviefile with matinee’s “Create a Movie” tool it doesn’t stay in sync with the global clock. If i write out an avi file it’s mostly in sync but if i write out pngs or bmps it’s way out of sync. It looks like the longer write time with the pngs/bmps is highlighting that the media player clock is not tied to the global clock. I looked at PlayLevel.cpp and it does look like the -BENCHMARK flag is being passed to the game instance in matinee’s Create a Movie tool so i’d think that that would keep media playback in sync. any ideas?

You are correct, the clock of the video decoders is completely independent. Matinee will render as fast as it can while the video decoder will retain the video’s playback rate. There is currently no way to synchronize playback during movie recording. We might change this in the not too distance future. See also Media Framework Roadmap.

Any news about this issue?
I have exactly the same problem.

That happens in matinee and also in the sequencer in the 4.12

Thirding this one, being able to sync the framerates of the media player and the matinee movie recorder would be incredible. I’m having to create all my tests for this in real-time with screen capture, which is just horrible compared to the Matinee Movie Recorded

Any news?
I will just start another project with video textures.
And again I will need to record.

Still working on it…

Hi guys same issue here when i capture from sequencer the Media player is going really fast and it’s not synchronise any solution on that thanks this kind of problem i got, the video is 2 minutes but when it capture it capture all but really fast you can see the video playing in the TV, what cause this problem any help

Yet no solution for that

Is there any update on this? I’ve tried limiting the frame rate/playback rate of the media player but can’t get it to stay in sync when recording from sequencer

No update yet. This has been reprioritized. I don’t have an ETA, sorry.

Thanks for the update.
Hoping for the best for this topic =)

First of all - this seems to be a very well known and sadly even harder to tackle issue, especially as the ArchViz community is growing and clients are breathing down many necks to get videos to play on video walls, jumbotrons etc.

I’ve read through all the explanations, and while it really is desirable for this issue to be reprioritized after having been reprioritized ;), I can say that this workaround did the trick for me: 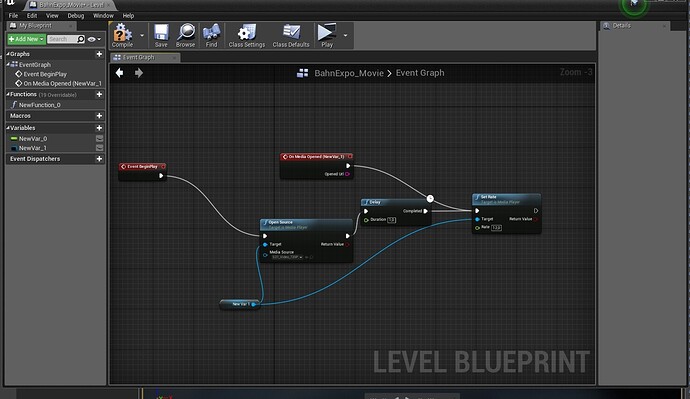 Adding the “Delay” node was the key element that had been missing and cost me half a day to find in another thread, so I’ve included it here with the final result.

It’s probably still far away from an elegant and perfect solution, but if your situation is anything like mine, you’ll probably appreciate this workaround very much. In my case, it delivered a reasonably stable, controllable result.

Best of luck until the “big solution” is at hand - so long,

I find out that adding a delay node to this has be accurately measured for you to get the pleased results, but by using “IMG Media Source” you can source your source video file to play an image sequence, this allows the engine to sync the frames for the output video inside the screen you’re trying to play inside the unreal with the render of the project video, yeah true it’s a work around but it works fine with synced frames fro both the in game media and the final rendered video.