After a very lengthy review process, our MPTPS Blueprints are on the Marketplace. And now it’s V2 with many added perks.

It comes with a lot of our animations, ready to go for Steam PVP action, progressive falling damage, different types of editable moving platforms, and other useful features.
It’s a solid base to build a game off of, and of course meant to be modified, edited, torn apart and expanded on to make one’s own personal project. Even for folks who typically DIY everything it is a good value with all the included animations and their implementation, audio files, as well as other useful core modules to extrapolate and build on.
We will likely add a “Team” mode and other game play features/options later, and John Galt has already posted some videos on doing just that on his YouTube channel you can check out.

The FREE Playable Demo is the included “TestMap” packaged for Win64, it’s all in the Project.

Yes, the Demo Map could have been a lot simpler and small to illustrate/test the basic features. But we are artists, creators and love playing games so we made an extensive level with some platforming, sound design, and other crazy stuff just for the heck of it - to make it a demo “game” WE wanted to play FWIW. It won’t win any design awards but we had fun, hopefully you will. We kinda went nuts and made it a HUGE map so it takes a bunch of players to make it a more fun frag fest. Demo supports eight Players - if your host machine/connection is up to it. We may make a smaller demo map as well.

So everyone download and play the free demo “game”, it’s free.

NEW AND ENHANCED FEATURES INCLUDING:

A comprehensive set of Blueprints for a third person shooter with network replication for multiplayer support. A modular system and great starting point to create your own game, with many custom animations and audio. Our MotusMan skeletal mesh is used for NPCs and include several demo animations from our other Mocap Online Animation Packs.

Please check out the FREE Playable Demo Level! It is included with the Blueprints and fun to run around fragging, do some some platforming exploration in more remote areas with a few surprises. Have fun! Explore! 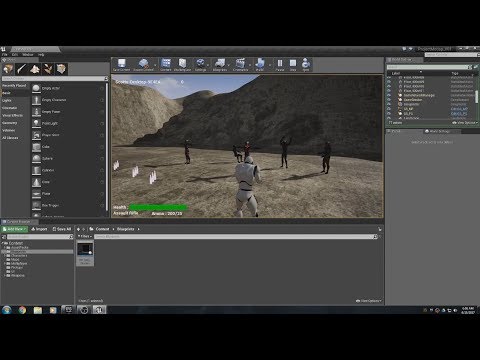 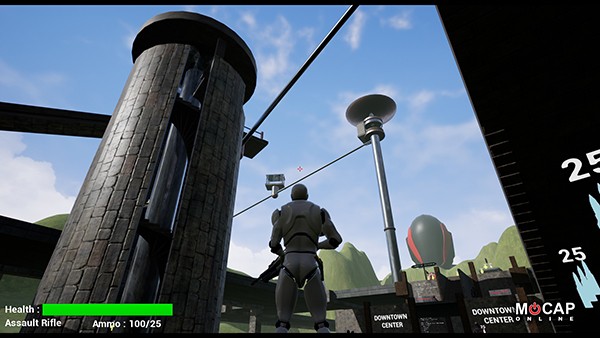 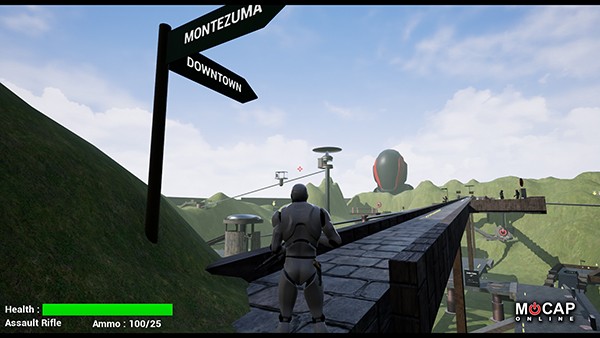 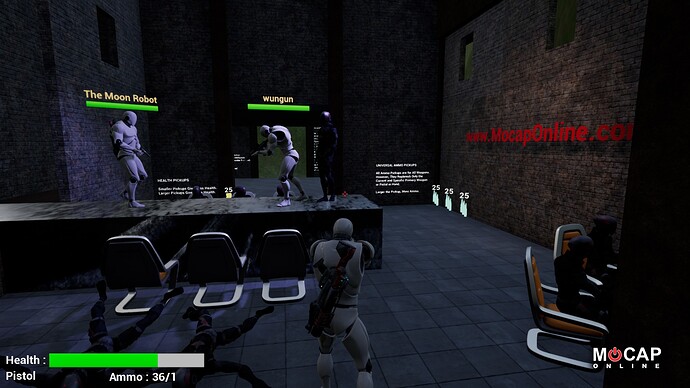 NEW version 2.1, check your Vault if you have purchased v2 previously.

Thanks to Damian for working out a snag with us he discovered. When replacing the SK_Mannequin mesh with some characters from the Marketplace with the same standard Epic Skeleton, weapons were not attaching properly. This was due to an extra animated bone “hand_r_wep” being used for the sockets. This has been fixed with switching from the"hand_r_wep" to the standard middle finger bone and new sockets, and redoing the animations. The animated middle finger now assists with best Rifle placement, and swapping meshes with the “Assign Skeleton” function now works perfectly with compatible stock characters. There is no other change to the Blueprints and this is very much a transparent fix with no visible change. “Assign Skeleton” simply works now, before it dropped the weapons.

We have new updated documentation about easily updating your v2 modified WIP Project with the v2.1 fix and features (link above), simple and easy. Ask Damian.

If you are not familiar with “Assign Skeleton”, it can take your custom character (or from the Marketplace) and fully replace the default UE4_SK_Mannequin in the Blueprint with a few mouse clicks. The skeleton does need to be 100% STOCK to match the UE4_SK_Mannequin skeleton, or it will fail and cause chaos. Definitely do some research and check first. A lot of great characters on the Marketplace say they are rigged to the Epic skeleton and scaled(another important thing) to the Epic skeleton, but extra bones and/or changed hierarchies make them incompatible for the AS trick.

Scale and proportions matter as well. For best fit and Rifle placement the Skeleton should have the same proportions. Hence meshes with a skeleton truly 100% matching the UE4_SK_Mannequin will transfer and match perfectly. Variations in scale and/or proportions, your mileage will vary and maybe need some adjustment.

And always backup your project FIRST! Can never say that enough before performing surgery on a project.

Of course there are others, but here’s a couple of characters we’ve tested that are 100% stock Epic skeleton and plug-n-play compatible:

The Soldier looks great, and the Gangs are cool looking without the bulky soldier clothes and gloves, you can see the fingers/hands fit on the weapons perfectly since they are all the 100% matching Epic skeleton. Chances are the other nice characters by these sellers are “Assign Skeleton” compatible as well, I would ask them directly.

“Assign Skeleton” is a cool feature and shortcut, if you create your own character or buy one based on the stock Epic skeleton. 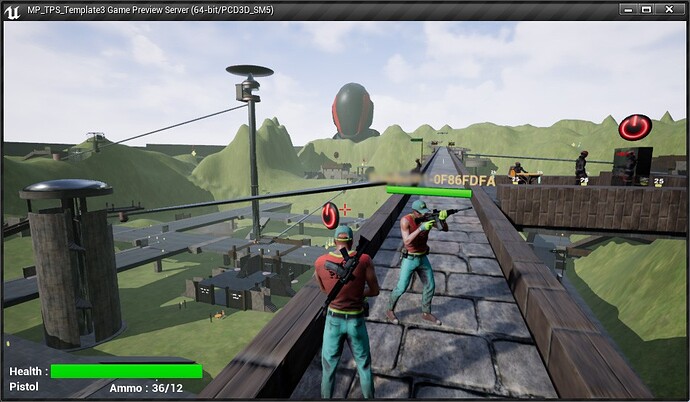 Replication for falling damage audio needed to be tweaked, as well as Reverb levels in Audio Volumes(?). Not sure what they altered in the audio engine, but those two changes were all that was necessary in the blueprints.

If you already are using 4.18-4.19, look at the Falling Damage in the BP_Char_Master and you will see a custom attribute added, the audio switching collapsed to a function “PlayFallSoundFX” to be neat and save space, and a SwitchHasAuthority added to the Tick input for correct replication. This tweak could be re-created in 4.18-4.19 to make it more robust if desired, although it works fine(of course) without it as it is now. 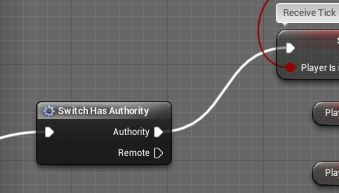 Will you ever be adding A.I that shoot back to this?

Will you ever be adding A.I that shoot back to this?

Anything is possible, but not likely as A.I. is not John’s area of expertise. We are however looking at other possible additions.

We are discussing an update that could include core team play functionality with basic game modes, as well as adding player “classes” and revamping the weapons system to match different styles of play. This would enable many different “plug n play” game modes that John could offer as stand alone add-ons Blueprints later.

Nothing definite but we are talking about it now what we want to do.

I’ve made a custom game mode that provides randomly generated levels. It works fine when running from the level itself, but I change the level of the main menu button to my level, and I get locked in place and have no control over the character at all.

I’ve made a custom game mode that provides randomly generated levels. It works fine when running from the level itself, but I change the level of the main menu button to my level, and I get locked in place and have no control over the character at all.

rdograndy figured it out! Needed to copy over some Steam blueprint logic from the original level, working now.

John and I went through it all, and Engine 4.21 tweaks have been added.

4.21 created some random network latency (Epic says it’s not a bug, but how is latency creating errors a feature/improvement?) and other nitpicky things requiring adding Delays, IsValid checks and redundancy to functions working fine in 4.18-4.20.

The Delays for EventBeginPlay can be dialed back wherever you want them, but we left them at 1 sec. as a safety to make sure the set player health and name worked always, especially starting a hosted game.