Hi!
Couldn’t seem to find a similar thread in the forums, so here goes: I would love to see video textures work when rendering in Matinee. From what I’ve understood it isn’t the easiest thing to do, but it seems quite important as using flipbooks becomes quickly very time-consuming compared to being able to import whole video clips. Especially in arch viz this would be an incredibly useful & time-saving feature + opens for a bunch of interesting artistic explorations.

Which version are you using? I just tested on 4.9 and i can see the media texture playing both in editor and Matinee recorded output.

I’m on 4.10 & my media textures (.wmv* files placed inside a Movies folder inside the projects Content folder) are a no-show on matinee renders.

I’ve been using .mp4 without a problem but i dont think that’s the problem. Have you reset the path of the movie file in media player? 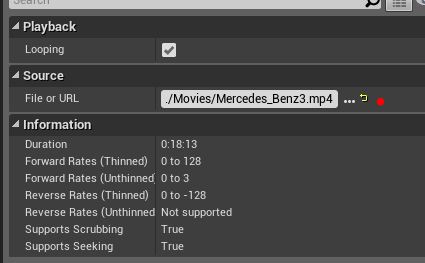 When you first load the video it will show the project path. To fix that hit the yellow arrow to reset the path and then show the video’s location again.

For some reason .mp4 has yet to work for me in UE (plays as blank & empty), .wmv works just fine in-editor though. Could it be a codec issue? If so I’m not entirely sure where I’m going wrong. Double checked the movie path reset (which was fine), no difference.

So strange. :eek: I swear it worked in a recorded image sequence yesterday, but after reading gmpreussner’s post i dont know how it did.

That’s a shame, was sort of hoping I had just gotten it wrong somehow…

edit: gmpreussner has clarified in the thread linked to above that it will take a while before this gets implemented.

Slightly old thread, but wondering, is this ability shown in picture above, about playing a prerecorded video in external app, inside ue4 in matinee, and can it be used for triggers if so? Just wanted to verify as someone else was trying to do it and I as well will need it eventually.