Matinee movies not being saved anywhere?

I’m attempting to render out a matinee movie, but it doesn’t seem to be saving in my project/saved folder. Unreal plays the matinee correctly (the matinee sequence works, I have the level BP quitting once it’s finished playing, etc.), I’m just not seeing an .avi get saved anywhere.

The only files/folders in my /saved folder are autosaves, backup, config, logs, and an autoscreenshot. Should I be looking somewhere else?

Yea, it should be in Saved/VideoCaptures but I’m experiencing the same thing today… I was recording just fine yesterday and now today it’s not playing. I have everything exactly the same but it’s not saving anything or is it applying my settings for the video like resolution, close editor, etc etc

Which version of the engine are you running so I can test this issue on my end?

Same problem for me, It was working 3 days ago, and now nothing is saved when I want to record a matinee sequence

Would any of you be willing to provide me with some reproducible steps as to how you are setting up your Matinee to record?

Hi Andrew. I quit and restart Unreal Editor and it was working again so it’s not really a big issue for me.

When i first tried to record a movie it didn’t work, but on the second or third try the movie was created inside the VideoCapture folder (same settings).

Hi Andrew, I’ve been dealing with the same problem these people have. For some reason Matinee isn’t saving my video captures anywhere. Did you come to a conclusion on how this happens?

Which version of the editor are you using and have you attempted to restart the editor?

Also, how are you setting up your matinee to record the cinematic?

I am using 4.7, and if by setting up your matinee to record the cinematic, you mean I have a director group and everything, yeah.

What are the options you select when pressing the ‘Movie’ button? 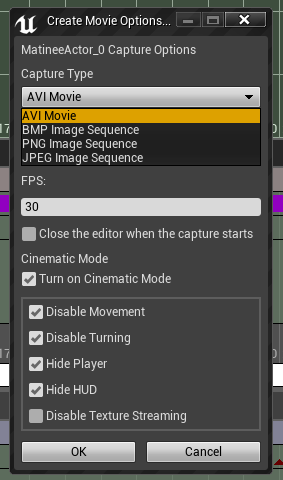 Where is the Capture Type dropdown in 4.10.1?!?!?! I want to (need to, because exporting and AVI crashes UnReal) export a series of images and this option isn’t available?! Thanks!

This option is available, you might just be overlooking it. 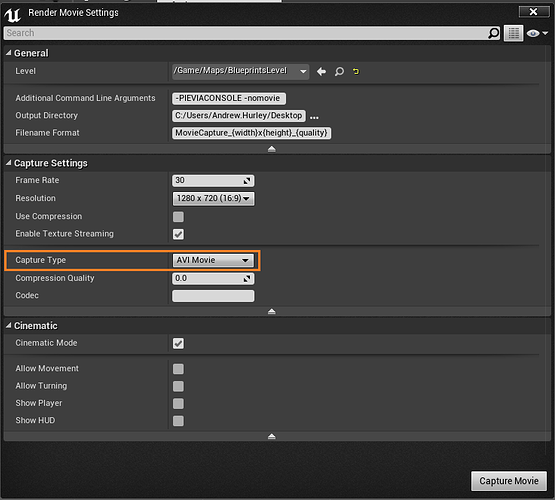