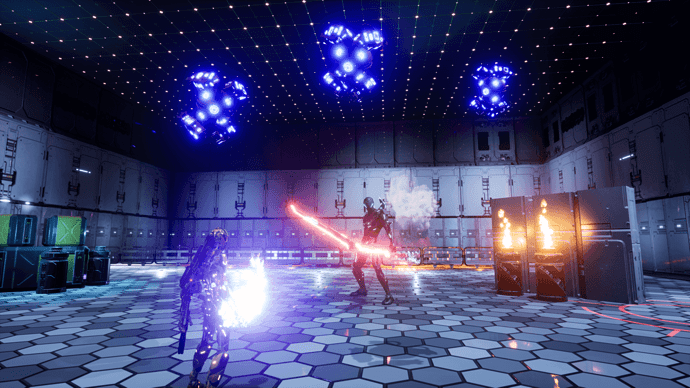 Hello! My name is Orfeas Eleftheriou and I would like to share my solo developed game, named Mark One! Mark One is a top down Sci-Fi shooter game, heavily influenced by Doom, with twin stick shooter elements. So let’s start with the teaser trailer! Teaser Trailer
Mark One Teaser 2020 - YouTube You’re a highly trained AI agent tasked with the responsibility of disposing bots which have gone rogue.

The gameplay has been designed in a way that encourages you to face multiple enemies at once. As the player, you’re equipped with various weapons that you can leverage in order to annihilate any enemies that cross your path. In case your weapons run out of ammo you can use your unlimited grenades to hit several enemies and replenish your missing ammo for each weapon.

Has your HP dropped significantly during the fight? You can use your sonic punch and life steal the hp of your hit enemies!
https://i.imgur.com/i998LFr.gif
First Boss Fight

Take a look at the first boss fight of the alpha verison of game in the following video: Mark One: Alpha Gameplay Footage - YouTube

The upcoming features will include:

In case you liked the videos above, you can help me by wishlisting my game on Steam.
Drop a like in my facebook page to stay updated regarding its development process!

Thanks for reading this, have a nice day!