Making a static mesh follow me with physics enabled

Hey Guys,
I’m totally new to UE4 and C++, I’ve done a couple of courses on these subjects and overall getting the hang of it.

So as a practice I’m trying to make a Snowboarding game, as I couldn’t find a way to enable physics in a character and have the movement I went ahead with a ball (using torque), so now my pawn ball is rolling down the hill and I can control the movements.

I also added a mesh of a snowboard behind (see picture) and now when the ball is moving the mesh is being dragged behind, my initial plan was to make the ball invisible and have the snowboard look as if it’s the actor by adjusting the camera. 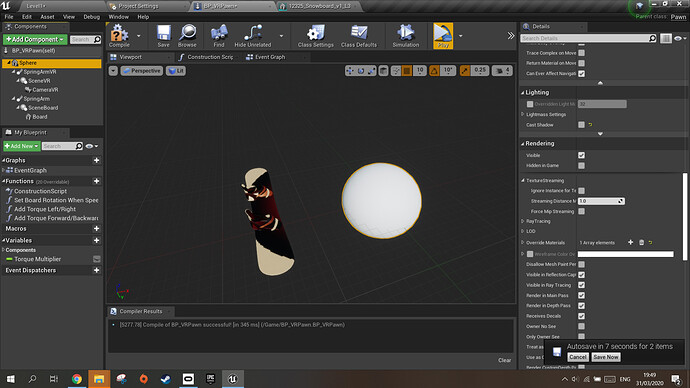 The thing is - it looks really unnatural, the snowboard mesh is just floating the whole time and sometimes goes into the floor as it’s always at the same height, I wanted to enable physics and make it respond to the surface but once I do, it just falls on the ground and isn’t following the ball at all.

How would you guys go about it? Is there any way to have the snowboard collide with the floor and still follow the ball?

Any suggestions would be greatly appreciated!