How to make character equip a weapon when a key is pressed, from code? And how to switch between animation in the AnimBlueprint with the variable that is in the code?
thanks in advance for help

Please use SSCCE from now on. I don’t think anyone is going to help you with your problem when your problem you stated is very vague and not specific/detailed enough. 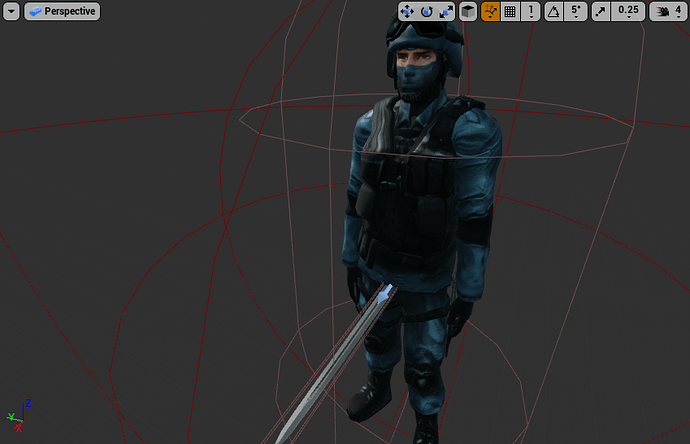 I’m having trouble attaching my sword mesh with the righthand socket. Inside of Persona, I have the socket positioned at the character’s right hand, with the sword attached to the socket: Now since it’s a preview, I have to manually attach it in...

Change the Weapon Mesh during the game

Hi all, My question is : How to change my weapon mesh during the game ? I’m using a blueprint BP_BaseWeapon and his mesh is “Rifle”. I want to change during game when a button is pressed the weapon’s mesh to another mesh “Launcher”. Anyone know...

How to set animation blueprint in c++

Hi, I have a character with a skeletal mesh and I want to attach the animation blueprint to it. could someone help out?

I am doing a simple tps, i started setting the animation using the AnimStarterPack on marketplace, and i want make him switch the animation from the third person template idle to the idle where he has a weapon in the hand using a equipping animation in between. I am using code so i add the key event in ThirdPersonCharacter.cpp
Here is the code:

I want to use this variable (IsWeaponEquiped) in the transition between the animation like here but i don’t know how to. 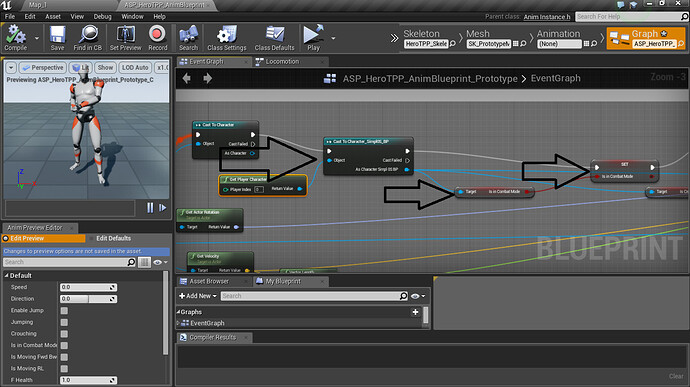 You’ll need to make sure that your variable in the class is specified with the correct access i.e. has the UFUNCTION and the correct settings to be read by blueprint (BlueprintReadOnly or BlueprintReadWrite) such that you can actually access it in the event graph of your anim blueprint. Simpler shows you the right way to pass this into your animBP, although honestly it feels a bit cludgy because all the event graph is doing is grabbing data and storing it, when it feels like that should be automated somehow.

Simpler shows you the right way to pass this into your animBP, although honestly it feels a bit cludgy because all the event graph is doing is grabbing data and storing it, when it feels like that should be automated somehow.

You’re right. And when the state machine gets bigger and bigger you have to do this process for every variable and it gets annoying. But this is the only way I could come up with. If someone knows a better/ more efficient way of doing this let me know!

After the last update i have set and get funcion of the variable, istanced on the code, also from blueprint. And using “Cast to Character” like Simpler did make it funciotn. Thank you:)