Main Menu keeps showing up at end of Runner Level?

So I have a Main Menu with a Splash Screen Intro Widgets that show up and then the game Starts and loads Level one. There is also a blueprint that cause the player to hit the end and then move to the next level automatically.

All of that works but, when I hit the end of Level One it just repeats showing the Splash + Main Menu widgets on the screen again however, I can see that it’s going to Level Two in the background because of the print string I have attached to it.

I tried using a Do Once Node but, that didn’t work and I am struggling and spent several hours trying to understand how I can resolve this issue.

I am not even sure why I keep messing up the menu thing, I keep trying and the only thing I can think of is to keep trying til I get it eventually.

Any ideas? Not sure what you might need to see to help?

Sounds like your splash widget is caused by the BeginPlay or Constructor of another class that always gets created when a level opens, such as a GameState, Playercontroller, or player Pawn class. Something listed in your Game Mode probably creates the widget on beginplay or constructor.

Ahh okay, yeah, I had it firing off of the Event Begin Play so that both show up straight away. I think I kinda understand what you are getting at though.

I will move it to a custom event and call that from the Begin Play, maybe that will work I think?

Sometimes to check on these things I right-click the event or function and use the Find References (find in all blueprints option) feature to make sure I know everything that is firing the event or calling the function.

I also will type in the blueprint search the name of the UMG widget class, and look in the results list for the Create Widget function in connection with that.

Also check whether you’re showing, hiding, or setting the Visibility of the widget anywhere you didn’t expect.

Hmm well I have no idea, I was busy with something else then went back to trying to understand that some more and tried making it a custom event to call and do once but no luck yet, same issue.

It’s on it’s own Hud Widget BP that I am calling it from and the auto move to next level is on an actor blueprint with an object mesh as a button for the player to overlap. 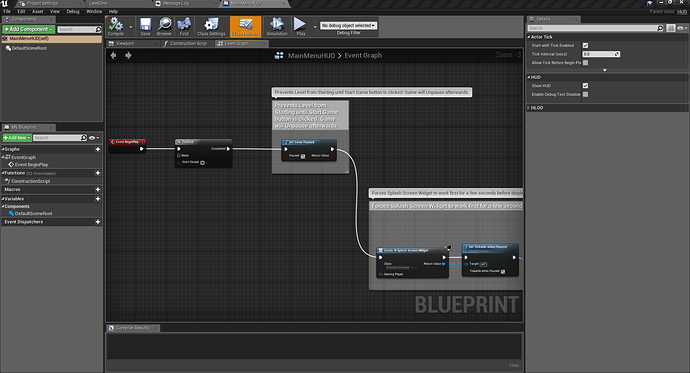 I’ve been trying to figure that out but sometimes I wonder if I am looking at it right. I do see the find references and I’ve also seen something about a reference chart too. Been trying to understand how to debug these these things.

Hey there’s a good idea: Set a breakpoint a few nodes before the part that triggers your menu to pop up. When you play in PIE, then it should hit that breakpoint and let you step through the nodes one by one (use the Step Over button) and see what choices it makes and what values it sets the in-scope variables to. This could really help you figure out why it’s happening.
Be careful though - breakpoint debugging like this tends to crash the editor when used on UMG widgets sometimes.